A rendering of one of the planned apartment buildings, which would be similar to the adjacent Villages at Westlake apartments. (Courtesy The Breeden Co.)

The developer behind an apartment complex at the northern end of German School Road is looking to add more buildings beside it, filling out a corridor off Jahnke Road that continues to have an influx of hundreds of new homes.

Virginia Beach-based The Breeden Co., which developed the nearby Village at Westlake apartments, has filed plans for five more buildings totaling 122 units on a 6-acre site at 6400 Jahnke Road, at the northeast corner of Jahnke and German School roads.

The $22 million project is pending city review and anticipated to start construction this fall, with initial units coming online a year later and completion slated for early 2022.

Property records show Breeden purchased the land for $1.4 million, in a transaction that closed Feb. 20. Records list the seller as Catherine Wright. The unimproved parcel most recently was assessed by the city for $600,000.

The site is just west of Lucille M. Brown Middle School and across German School Road from the Crossings at Bramblewood apartments. 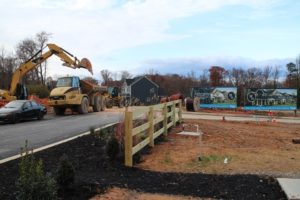 Lots are being established at Westlake Heights, a 120-home subdivision off Jahnke Road. (BizSense file photo)

The new units would add to a flurry of activity along German School Road north of Jahnke, where construction is underway on a 120-home subdivision developed by Richmond-based Legacy Land Development. Ryan Homes is building the single-family detached houses.

Dana Wilson, vice president of public relations with Breeden, said the company was motivated to move forward with the project based on reception to Village at Westlake, which is currently 98 percent occupied. The 3-year-old complex, which totals 252 units, includes one-, two- and three-bedroom units that rent from about $1,000 to $1,500 monthly.

Wilson said the new units will consist of two- and three-bedroom floor plans with comparable rents and finishes to the existing apartments.

“It will definitely complement the existing project,” Wilson said. “The current project there was a very successful product. We leased it up fairly quickly.”

The new buildings will include a clubhouse with pool, fire pits, grilling stations and a fitness center.

Breeden Construction is the contractor, and another Breeden subsidiary will handle property management. Charlotte-based The Housing Studio is the architect on the project, with local firm Timmons Group handling engineering work.

Also, Lawson Development of Virginia Beach is building about 100 units just a quarter of a mile south of Janke Road on German School Road as a mixed income community.

That area is suddenly humming with activity.