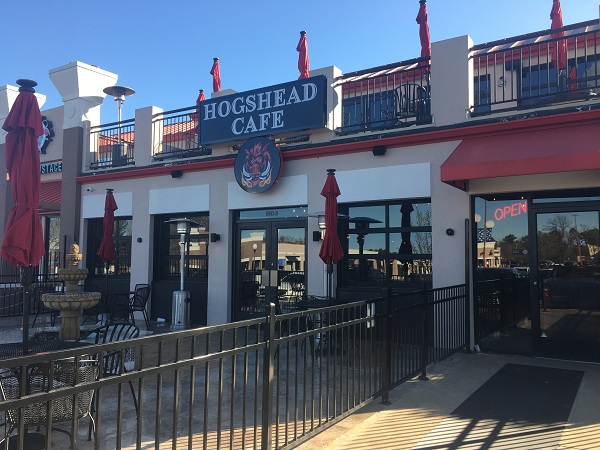 Hogshead Café opened last month at its new spot at 8902 W. Broad St., in the former Havana ’59 space in the Gold’s Gym Plaza at West Tower.

At about 5,600 square feet across two levels, the new location is roughly five times larger than the space it leaves behind at 9503 W. Broad St., its original location and home of more than eight years.

Hogshead had been looking for something bigger for a few years, though it didn’t want to risk losing its customers by moving too far from its original location, said Kim Logue, who owns the restaurant with her husband Steve.

“We knew we never wanted to move far,” she said.

The new restaurant has a larger kitchen, which will be put to use with an upcoming new menu. The restaurant is known for its limeades and the Hog Dog, a bacon-wrapped, deep-fried hot dog topped with pulled pork, coleslaw and barbecue sauce.

The upstairs features a bar and a room that could be used for private dining. The space hasn’t opened yet, as the Hogshead team gets acclimated to the new digs, but the plan is to open the upstairs to diners in the next couple weeks. Hogshead also plans to host live music in the upstairs area, which the restaurant couldn’t do in its previous space, Logue said.

With the move, Hogshead has upped its staff from about nine employees to 25. Logue said she’d like to add Sunday brunch to the restaurant’s offerings in the near future.

Other tenants in Gold’s Gym Plaza include Crustacean Boil and Grill, math and reading center Kumon, and Gelati Celesti. The shopping center is owned by SugarOak Properties, which is based in Herndon. SugarOak Realty handled the lease negotiations with Hogshead.

In other barbecue news, the team behind the Jadean’s Smokin’ Six O mobile kitchen plans to open a brick-and-mortar restaurant at 1126 Westbriar Drive off Patterson Avenue later this month.