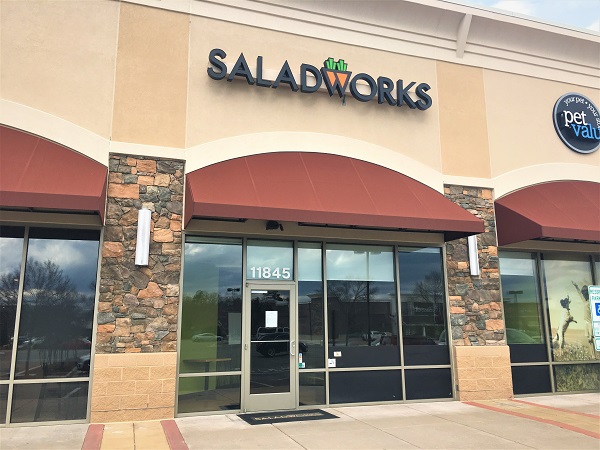 Saladworks has closed its location in Short Pump. (Jack Jacobs)

One of two local outposts of a fast-casual salad restaurant chain has closed.

The restaurant’s lease on the Short Pump space had expired, according to Thalhimer’s Connie Nielsen, who handles leasing for the shopping center.

Nielsen said a new tenant has been lined up for the space but would not share further details.

The Short Pump location is owned by franchisees Kevin Long and Travis Miller, who also have a second Saladworks at 7000 Forest Ave. in The Shoppes at Reynolds Crossing. That store, the only other Saladworks in the Richmond area, remains open for business.

Long declined to comment for this story when reached last week.

Long and Miller opened the West Broad location in the Corner at Short Pump shopping center in 2012. The Reynolds Crossing shop followed in 2015.

Terranova added that the closure isn’t part of any larger retreat by the national chain.

“This is not an indication or reflection of the health of the Saladworks brand,” he said. “Saladworks has over 100 restaurants and we are continuing to open new restaurants in communities across the country.”

The Corner at Short Pump is a 41-acre shopping center anchored by Kroger and sits across the street from Short Pump Town Center. The center also features an Olive Garden, an Orange Theory Fitness and a Genghis Grill.