Fulton Yard will include 535 apartments and 106,000 square feet of retail and commercial space. (Rendering courtesy 3North)

A major mixed-use project across from Rocketts Landing has taken another step toward blasting off.

Zimmer Development Co. this month paid $5.3 million for the three separate parcels it needs for its Fulton Yard development, which as planned will include 535 apartments and 106,000 square feet of retail and commercial space spanning at least four buildings.

The North Carolina-based firm has been under contract since last summer on the roughly 23 acres at the Richmond and Henrico County line. Railroad giant CSX was the seller in the deals, which were recorded last week.

On the city side of the assemblage, the company purchased 25 Nicholson St. for $531,000. In the county, it bought an unaddressed parcel near 4900 Old Osborne Turnpike for $2.25 million, as well as 201 Orleans St., a roughly 6-acre parcel that’s split on the Richmond-Henrico line, for $2.56 million. 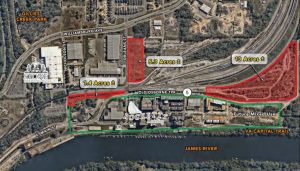 Fulton Yard had the land rezoned last fall, and the firm is preparing to go before the city and county’s planning commissions to seek site plans approval, said Adam Tucker, director of development.

Zimmer plans to build Fulton Yard in phases, with the first phase consisting of a pair of five-story mixed-use buildings totaling 100 apartments and 3,200 square feet of commercial space on the Orleans Street parcel.

3North is the architect, and Zimmer said a general contractor has not yet been selected. Robert Jones of the recently created commercial division of Icon Realty and Connie Jordan Nielsen of Thalhimer will handle leasing on Fulton Yards’ commercial space.

One of the prominent apartment developers recently told me that the developer no longer “selects the general contractor”. The roles gave reversed. Now, the GC selects the project it wants to build and the schedule for it. That’s the nature of building when theres a shortage of good subs.