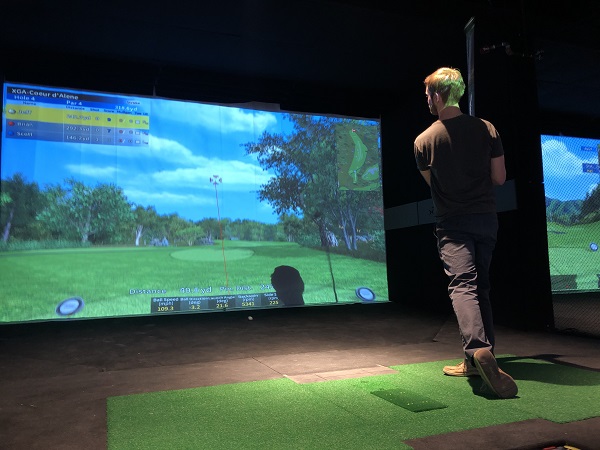 Co-owner Josh Engelken taking a swing on the simulator. (Photos by Michael Schwartz)

Kyle and Josh Engelken aren’t letting the coronavirus scare completely prevent them from leaping into the golf business.

The brothers on Sunday opened the region’s first location of X-Golf, an indoor golf simulator, restaurant and bar concept at 15800 WC Main St. in Westchester Commons.

The 6,000-square-foot storefront, which sits next to Rusty Taco and had been vacant since it was developed, now houses six simulator bays with seating areas, a sizable full-service bar and a small kitchen. 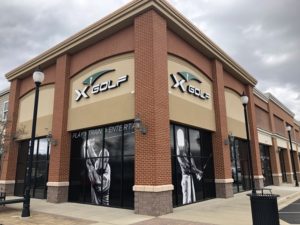 They launched with a friends-and-family opening on Saturday and opened to the public the next day. That was before many restaurants locally and nationally made the decision to close their dining rooms in the face of coronavirus chaos.

They’ve since made the call to remain open, while limiting the number of guests in the venue at a given time to comply with the government’s urging of minimizing group gatherings.

“Some of the beauties of X-Golf are the relatively private, spacious simulators, our proprietary auto-teeing technology that eliminates the need to touch a golf ball, and the ability to use your own equipment,” Kyle said. “We will continue to be responsible, providing a safe environment for our customers. The space is spotless and we will be hyper vigilant about cleaning.”

And curious folks are trickling in sporadically, perhaps looking for a respite or to scope it out for a return trip once life gets back to some sense of normal.

“People are coming in to hit balls or popping in to check out the space and saying we’ll be back when all this craziness calms,” Josh said.

They’ll stick with that plan for now and will take cues from California-based X-Golf America, which franchises the venues, using the company’s own brand of golf simulators. The company now has more than a dozen locations nationwide. The simulators use infrared, lasers, cameras and impacts sensors to track and measure a player’s swing, while allowing users to play virtual versions of 50 well-known golf courses from around the world, including Bethpage Black and Pebble Beach.

The simulator bays in the Engelken’s location allow up to six people at a time. Prices per bay vary from $35 to $55 an hour depending on the day and time. Players can bring their own clubs or rent from the facility. 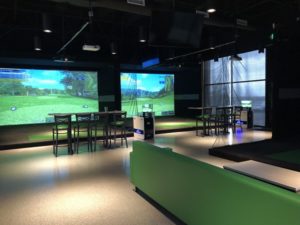 The venue also offers lessons with onsite golf pro T.W. Pulliam, who previously was director of golf for The Dominion Club in Henrico.

The Engelkens grew up in New Jersey before coming to Virginia for college. Josh, a 35-year-old JMU alum, is managing the new venture full time. Kyle, 34 and a UR grad, will continue in his day job as CFO of local broker-dealer WealthForge.

The brothers bought a territory that allows them to open franchises in Richmond, up through Charlottesville and down into Williamsburg.

They budgeted between $500,000 and $700,000 to open the business, using an SBA loan from Atlantic Capital Bank and putting money in themselves.

X-Golf is one of at least three golf simulator venues to have opened in the region in recent years. Both the Edge Golf Academy and Tee It Up opened last year, the former across from Scott’s Addition and the latter in the Shoppes at Bellgrade in Chesterfield.

Such venues typically look to cater to avid golfers looking for a break from crowds and weather, or to beginners seeking to learn the game without the pressure of a group of golfers playing behind them.

I stopped by to give the new sims a try and was blown away by how fast and accurate the tracking technology was. It’s also much more spacious than I was imagining. Highly recommend, I’ll be back soon.

I wish them good luck…something different…