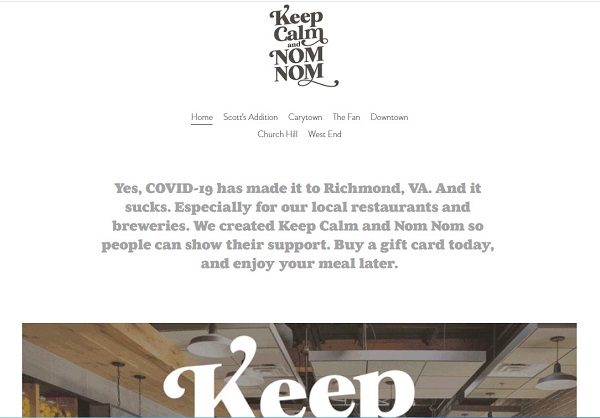 A screenshot from the Keep Calm and Nom Nom website.

With public health concerns surrounding the coronavirus hitting the food and beverage industry particularly hard, a campaign from a Richmond ad agency is looking to help area restaurants and breweries stay afloat by bringing them revenue from a distance.

Scott’s Addition-based Familiar Creatures launched a website this week encouraging patrons to purchase gift cards for establishments amid the COVID-19 outbreak, which has prompted restrictions on public gathering spaces such as restaurants and bars.

“Buy a gift card today, and enjoy your meal later,” the site states.

Called “Keep Calm and Nom Nom,” the site groups restaurants and breweries by neighborhood with links to their respective gift card webpages. By Tuesday morning, the site (keepcalmandnomnom.com) had linked logos for more than 150 businesses in Scott’s Addition, Carytown, the Fan, downtown, Church Hill, the West End, Northside and the Southside.

Justin Bajan, who started Familiar Creatures two years ago with business partner Dustin Artz, said the campaign was thought up late Friday afternoon initially as a way to support their Scott’s Addition neighbors. 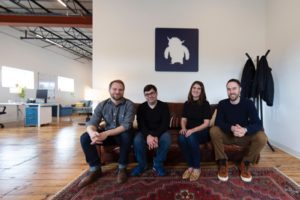 “We started thinking, these guys are probably going to take a hit over the next couple months, and we’d love to look out for them; what’s a tangible way?”, Bajan said. “We started trying different names and tried to figure out the approach. We started out with Scott’s Addition, and then we just built it out for the rest of Richmond.”

Since the site went live Monday morning, Bajan said they’ve received requests from additional businesses asking to be added to the site. He said they started with those that they knew sold gift cards and are adding more as they come across them. He said the only other requisite for the site is a business logo to use for the link.

None of the businesses on the site are clients of the agency, as Bajan said Familiar Creatures’ only food-and-beverage client is Devils Backbone Brewing Co., which is based outside Richmond. The agency’s other clients have included Richmond-based used car dealer CarLotz and Mercy College in New York.

Bajan and Artz launched Familiar Creatures in early 2018 after stints at other ad shops, including The Martin Agency, where Bajan was a senior copywriter and Artz was an associate creative director. Their agency now totals four employees and recently moved across the street to The Highpoint Building at 3300 W. Broad St.

The effort comes amid the city government advising restrictions limiting on-site service for food-and-beverage businesses. Carryout and delivery service is encouraged, while the city advises against bar seating and limiting seating capacity to 50 percent.

The city also announced an amnesty program for all penalties and interest on most local taxes, including the meals tax, due between March 13 and June 30. Small no-interest loans to support businesses are being explored as well, administrators said.

Several Scott’s Addition restaurants, such as Brenner Pass and Longoven, had announced temporary closures or transitions to carry-out service, while others across the city, such as Citizen downtown, said they were shutting their doors for good. Several restaurants, such as Heritage in the Fan and Julep’s downtown, said they were focusing their business on prepared to-go dinners and deliveries.

In light of the circumstances, Bajan said his team is looking to take “Keep Calm and Nom Nom” to the masses through paid advertising and other marketing approaches.

“We’re thinking about doing some paid social (media ads) and billboards locally around town,” he said, “just to get people to come to that website so we can get our hipster food and our beer.”

Glad these guys jumped in!

Charm School Social Club is paying their employees during this down time. That’s a huge burden on a small ice cream shop…. make sure to pick up a pint or buy a gift card to use this summer. Check out their instagram post for the details….