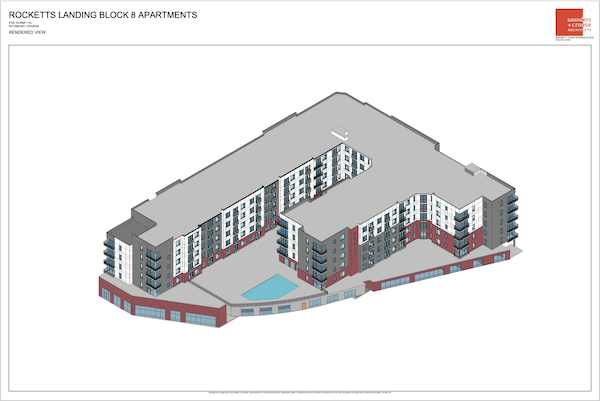 Plans were filed for a 6-story building with over 200 apartment units. (City documents)

More than 200 new apartments are being eyed at Rocketts Landing, after the riverfront neighborhood’s developer filed plans days before the coronavirus pandemic swept the nation.

WVS Cos. this month submitted a plan of development to the city for a six-story mixed-use building with 203 apartments at 4401 E. Main St. 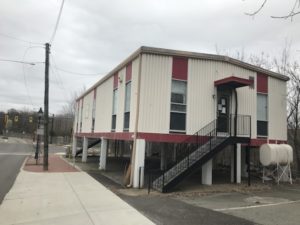 An abandoned building near the intersection of Nicholson and East Main streets is the property’s most prominent feature as of now. (Mike Platania)

Plans call for the demolition of two abandoned buildings and a fueling station on about 4 acres near the intersection of East Main and Nicholson streets to make way for an F-shaped, 296,000-square-foot building.

The apartments would consist of 130 one-bedroom units and 73 two-bedroom units, joined by first-floor retail space, a pool, club room, gym and courtyard.

The project also features 248 parking spots, about half of which will be sub-surface.

City property records show that the land is owned by an entity tied to WVS.

WVS did not respond to requests for comment by press time.

Saunders + Crouse Architects are listed as the project’s designer and Timmons Group is listed as engineer. Project cost is not outlined in the plans, which were filed March 6. 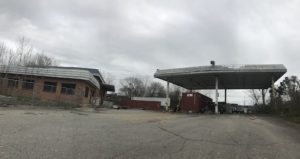 Another abandoned building and fuel station are also on the property and would be razed. (Mike Platania)

The project would add to the decade-long buildout at Rocketts Landing, which, led by WVS, has included development of hundreds of apartments, condos, townhomes, offices and commercial space.

The project is within eyesight of the Intermediate Terminal building, whose fate remains unclear after a city study found it may be able to support the type of restaurant concept Stone Brewing Co. originally planned years ago.

WVS also is working on an office building in Manchester with Fountainhead Properties and is putting the finishing touches on its latest building in the Lochs development.

Please, for the Love of God, don’t tell me that the building is going to look like that rendering. Can we stop putting up this garbage….it’s looks like Soviet Apartment Block 169 for the Glory of our Great Communist Motherland.

Hire a real architect, would ya?

Funny. The architect’s website has a page ‘No Boxes Allowed’ to describe their modus operandi. This is big box architecture 101 – something more akin to Charlotte then Richmond. Wish something would go here that would pay homage to Fulton Bottom in design and scale.

Obviously, that apartment block was designed by a gaggle of accountants that never visited the site. I’m sure it’ll look great to the principles of WVS Cos. as they check their teeth for spinach in the rear view mirror of their Mercedes as they drive away

I think these buildings look great. I welcome the development. Definitely an upgrade over an abandoned building & an abandoned gas station!