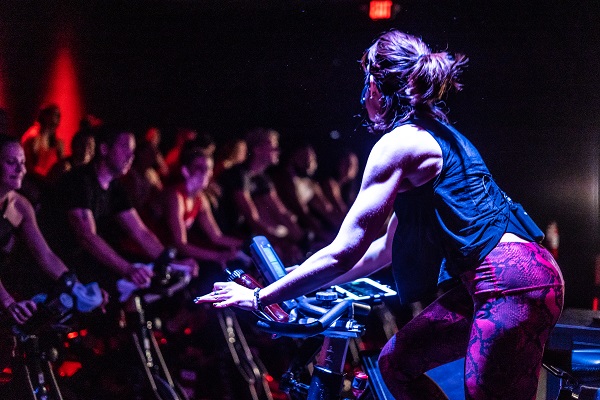 The Short Pump Cyclebar has launched remote workouts, which involves providing bikes to members to use at home, as a means to generate revenue after it closed its doors due to coronavirus. (Courtesy Cyclebar)

On the hunt for revenue as its members keep their distance during the pandemic, a local cycling gym has decided to bring exercise routines to customers’ living rooms.

The Short Pump outpost of Cyclebar, a California-based indoor cycling franchise, this week began renting out its stationary bikes and providing live-streamed workouts so people still could work out during the pandemic.

Donna Suro, who owns the gym at 301 Maltby Blvd. in the GreenGate development, hit on the idea of offering remote classes and bike rentals as a paid package around the same time as other Cyclebar franchisees.

Suro, who opened the gym in 2017 and closed it temporarily March 17, said it’s been a bottom-up process rather than a company directive.

“When we are in class and asking our riders to add gear and go faster, we often talk about struggle and overcoming obstacles. We talk about how practicing that in the ride will help us apply it to the real world,” Suro said. “Well, the real world is throwing some pretty heavy stuff at us right now and it is a perfect opportunity to live out what we have practiced on that bike.”

Suro said the move keeps the gym’s members connected and instructors employed. After closing the gym last week, Suro said it took about a week to pull together the remote program. About 40 cyclists took part in the first online session Wednesday morning.

There’s been high and sustained demand for the new program, Suro said. When she announced the program to upper-tier members, all 49 of the gym’s available bikes were scooped up in a half hour. The remaining bikes in the gym’s fleet were left there for instructors to use. Suro said she has a 20-person wait list for bikes.

The gym resumed collecting its regular membership fees for those who signed up for the remote program. It also launched a $50-per-month program, open to nonmembers, that gives people who already own stationary bikes access to the gym’s live-streamed exercise sessions. About 20 people have signed up for that, Suro said.

But while the gym has found a way to keep revenue coming in, it’s just a trickle compared to its normal operations and not enough to sustain the business alone. Suro said she planned to apply for government assistance, and hoped to attract more people to the $50-per-month membership package as well.

The gym has about 30 employees. Classes for its 15 instructors to lead have cut back from five a week down to just a couple per week. Suro furloughed her 15 front-desk employees and hopes to bring them back once the business resumes normal operations.

Love the American ingenuity. Now if someone could come up with a rental program for pinball/arcade machines.