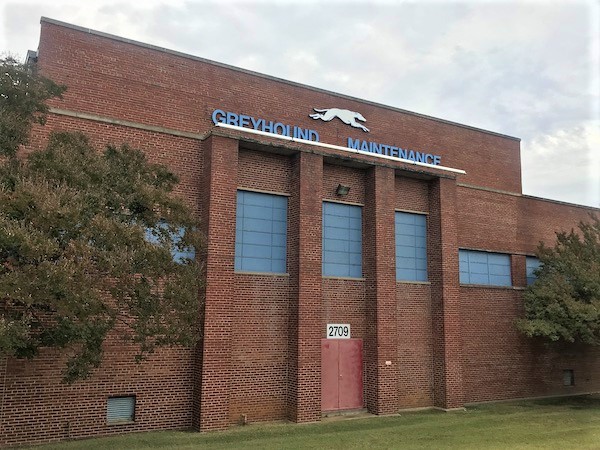 The land is primarily occupied by the Greyhound Maintenance station. (Photos by Mike Platania)

Though all collegiate athletics events are on hold for the near future, VCU is continuing to put its plans in motion for new sports facilities near The Diamond.

VCU announced last week it spent $11.7 million for 11 acres along Hermitage Road, where it’s planning an athletic village, including a tennis center, a multipurpose fieldhouse and “a new home for baseball.”

The land was owned by bus operator Greyhound Lines, Inc., which has been using the property as a maintenance facility and lot. 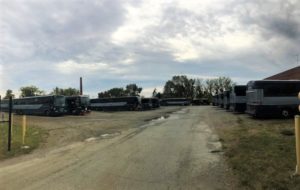 Included in the land is a lot Greyhound uses for bus parking.

The deal included three parcels: 2701 and 2709 Hermitage Road, and 1601 Cummings Drive, which most recently were assessed at a combined $4.67 million.

The university announced the deal March 26, the day it closed.

In the announcement, VCU Athletic Director Ed McLaughlin said the organization took out a low-interest loan to pay for the land and that no state or tuition funding was involved. The school’s athletics department, whose budget has more than doubled since the men’s basketball team’s Final Four run in 2011, will pay off the loan.

It’s unclear what Greyhound’s plans are for its local maintenance center following the deal. Attempts to reach Greyhound spokespeople were unsuccessful.

The university’s interest in that area extends beyond the Greyhound plot.

Last March VCU President Michael Rao gave a presentation outlining the school’s interest in the Virginia ABC headquarters at 2901 Hermitage Road, which will be freed up in 2021 after the state agency moves its operations to Hanover. The ABC Hermitage site has been discussed as the potential future home for a new baseball stadium to be shared by VCU and the Richmond Flying Squirrels, and McLaughlin said in an interview Friday that’s still on their radar.

“The ABC land acquisition has been written about a lot. It’s obviously in the governor’s budget for us to have a pass to acquire it as well,” McLaughlin said. “We’ve gotta go through the rest of that process and work on some other acreage as well, and hopefully we’ll have that whole thing buttoned up soon.”

McLaughlin said VCU will wait until it acquires all of the land it needs before demolition work will begin on the athletic village, an approach that also will allow them to do some donor fundraising for the project. 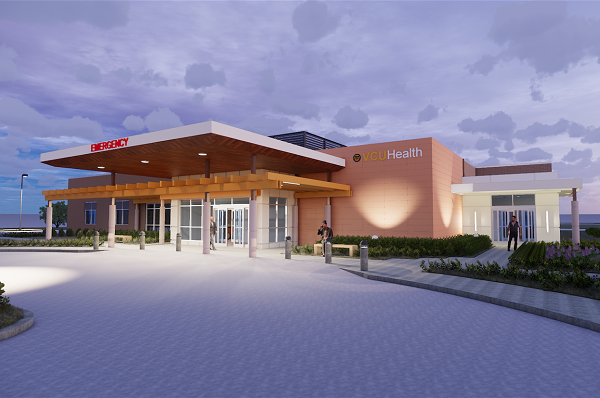 VCU Health has announced it will delay the opening of its upcoming emergency center in New Kent County. (Courtesy VCU Health)

Elsewhere within Ram Country, VCU Health System on Friday announced it will postpone the opening of its emergency center in New Kent County, citing the strain of the coronavirus pandemic.

VCU has decided that “in light of the immense resource pressures expected during this health crisis,” it won’t open the facility as scheduled, according to a VCU Health System news release Friday.

The health system originally planned to open the $16 million VCU Health Emergency Center at New Kent this spring. A revised opening date hasn’t yet been determined.

“We are deploying our team members based on immediate and anticipated staffing needs for patient care during COVID-19, and will continue to make decisions based on the course the pandemic takes,” spokeswoman Laura Rossacher said in an email.

The freestanding, 17,000-square-foot facility will be a first for New Kent County. The facility will feature 24-hour emergency medicine doctors and registered nurses, as well as laboratory services. Construction on the facility is almost done. The facility is located at 2495 Pocahontas Trail, which is near Interstate 64’s exit 205.

VCU Health and county officials will discuss a new opening day as the coronavirus pandemic plays out.

Larger images, please. The VCU facility image, is actually smaller when one clicks on it. Come on folks, you can do it, I know you have the expertise.

More City of Richmond property off the tax roles. yay. Thanks VCU.

Making matters worse, the city of Richmond had assessed it at less than half its value for how long? Is it any wonder that Richmond has one of the highest property tax rates in the state?

I believe that the Greyhound facility building on Hermitage was once a Miller & Rhodes warehouse.