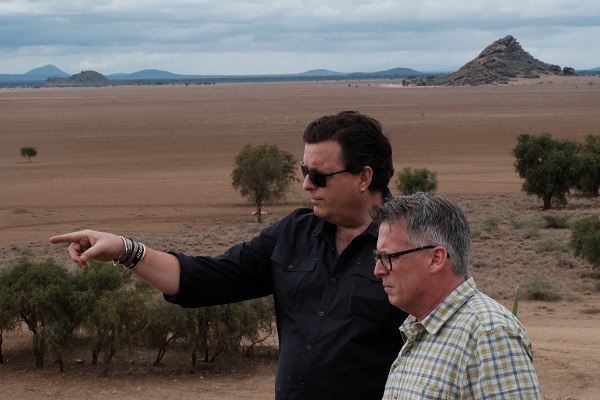 Craig Martin, left, and Earl Bridges on location during a shoot for ‘The Good Road’. (Photos courtesy The Good Road)

At a time when people around the world are looking for help in the face of crisis, a new TV documentary series that’s rooted in Richmond is putting a spotlight on international stories of overcoming struggle, through the lens of the business side of global giving.

“The Good Road,” an eight-episode series premiering this month on VPM and other public TV stations, is a years-in-the-making documentary show produced partially in Richmond, where co-creator and co-host Craig Martin is based.

Each half-hour episode highlights a different tale revealing the inner workings, and sometimes varying results, of philanthropic efforts in communities across the globe, from African nations such as Kenya and Tanzania to locales in U.S. states such as Alabama and Tennessee.

Describing themselves as “philanthropologists with cameras,” Martin and collaborator Earl Bridges produced the show with assistance from several businesses in Richmond, including In Your Ear Studios and VArtisans, a virtual reality production company housed at In Your Ear’s Shockoe Bottom complex.

Martin, who lives in Carytown, met Bridges when they were high-schoolers in Bangkok, Thailand, where Martin was born and where their parents were missionaries. They reconnected a few years ago when Bridges, based in Charleston, South Carolina, enlisted Martin to do some film work for Good Done Great, a charitable giving-focused software firm that Bridges co-founded and sold in 2017.

Using funds from that sale, the duo embarked on filming the series, which Bridges described as Anthony Bourdain-meets-Vice, “with a heart.” Martin invoked a comic book analogy of “Batman vs. Superman.”

“It’s more Batman,” Martin said of the show. “The characters are not clear-cut; some of them have some difficulty in the work that they do. It’s meant to be engaging and interesting, but ultimately entertaining as well.

“For public television, in a lot of ways it’s going to be a younger show,” he said. “It’s going to feel a little edgier, and I think that’s why (public TV is) also very interested in it, potentially skewing the demographic a little younger.”

Having pitched the show to public TV stations across the country, initially with the working title “Good All Over,” Martin and Bridges ultimately struck a deal with WETA, the Arlington-based station behind PBS NewsHour and Ken Burns’ documentaries. American Public Television distributes the show, and production is handled by Nashville-based Change Media, where Martin is vice president of creative development.

In Richmond, Martin and Bridges have been working with In Your Ear on a supplemental podcast called “Philanthropology,” and with VArtisans on virtual reality effects that Bridges said help illustrate the show’s various locations. They also worked locally with Travis Campbell, of chip manufacturer Advanced Micro Devices, who Martin said helped them work through potential sponsorships.

“It has been this meshing and collaborative coming together of a bunch of different people from different aspects of business here,” said Martin, who settled in Richmond in the mid-1990s through his involvement with International Mission Board, a locally based missionary association. 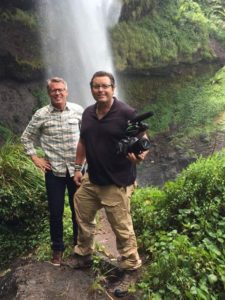 Bridges and Martin were friends in high school in Bangkok, Thailand, before reconnecting in recent years.

While “The Good Road” is not faith-based, Bridges said, “We’re telling some of the biggest stories in philanthropy in the world, with some of the most interesting characters who span the globe … but it all coalesces around the show, the podcast and the virtual reality experience, which anchors us in the Richmond area.”

With Martin already based here, Bridges said they chose Richmond for much of their production due to the city’s proximity to D.C. and WETA, as well as the local connections Martin had made through the years.

Stories highlighted on the show range from a for-profit tech company in Kenya working to make cyber connectivity available along the coast, with investments from U2’s Bono and Craigslist founder Craig Newmark, to efforts in Africa to protect elephants and black rhinos without help from Western countries.

The show tells U.S.-based stories, as well, and Martin said they hope to tell more in future seasons, preferably highlighting the communities they work in in Nashville, Charleston and Richmond.

Having spent their teen years traversing the streets of Bangkok – “There’s many ‘One Night in Bangkok’ stories that we have out there,” Bridges joked – the duo bring an international awareness to the show, as well as their respective experiences with philanthropic work. But the show also puts them in an unfamiliar position – on the other side of the camera as the show’s hosts.

“I’ve been doing film and television and related video media for almost 30 years; Earl comes from a business background. Neither of us have actually been on that side of the camera,” Martin said, noting they dismissed suggestions to enlist a celebrity host.

“If you got better-looking people than us, it wouldn’t sound as authentic,” Bridges said, laughing. Noting a former WETA show called “Globe Trekker” that actor Bradley Cooper hosted before he was famous, Bridges said, “We consider ourselves the next-generation Bradley Coopers.”

The series joins other locally produced documentaries that have aired on PBS in recent years. “Blackbird: Legacy of Innovation,” by Fuel Creative’s Todd and Pam Hervey, was picked up by 267 public TV stations across the country after it premiered in 2017.