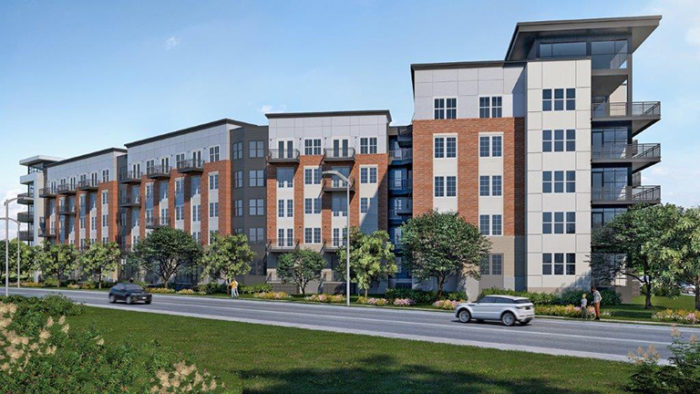 A $2 million land deal has cleared the way for the second phase of an under-construction development that’s slated to bring more than 200 apartments to Henrico’s Westwood area.

Tennessee-based Bristol Development Group recently purchased 2.1 acres of a 5.7-acre tract at Maywill and Thalbro streets from Kinsale Capital Group, which is constructing its new five-story, 150,000-square-foot headquarters building on the rest of the land.

Kinsale had purchased the 5.7-acre tract in early 2019 for $2.5 million. The latest county assessment valued the full tract, including Kinsale’s improvements, at $5.3 million. 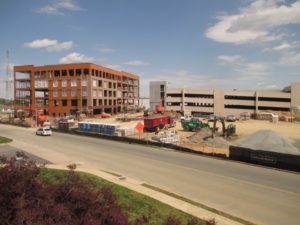 Bristol, which has been busy of late locally with apartment developments, including the Canopy at Ginter Park in Richmond’s Northside and the forthcoming Artistry at Winterfield in Powhatan, is planning a five-story, 200,000-square-foot building with 262 apartments for the Maywill Street site. Hanchrow put the project cost at about $50 million.

The project received development plan approval from the county in December. Hanchrow said construction is set to start in June and scheduled to wrap up by the end of 2021.

“That’s our plan,” he said, acknowledging the uncertainties surrounding the coronavirus pandemic. “Given the crazy world that we live in right now, we’ll see.”

Three-fourths of the units will be one-bedroom floor plans averaging 640 square feet, Hanchrow said. The rest will be two bedrooms averaging about 1,100 square feet. Monthly rents for the market-rate apartments have yet to be set. Community amenities include a fitness center, clubroom, co-working spaces, a pool, courtyard, and outdoor grilling and seating areas.

“It’ll be our typical Bristol high-end product,” Hanchrow said. “The finishes will be consistent with what you see at 2000 West Creek, Canopy at Ginter Park, Artistry at Winterfield, in terms of the interior unit features. The level of quality will be similar there. Obviously this is a much higher-density product.”

Called Tapestry West, the apartments are the first urban infill-style development for Bristol in Richmond, though Hanchrow noted the company has developed comparable projects elsewhere.

“We’ve done a lot of these urban projects over the years, in Nashville, Norfolk, Birmingham,” he said.

Poole & Poole Architecture is designing the apartments, and construction firm Katerra is signed on as the general contractor. The same team is collaborating on Artistry at Winterfield, a 200-unit project at Winterfield Place that also is getting underway.

Timmons Group is the civil engineer and landscape architect for Tapestry West. Atlantic Union Bank is the lender. Hanchrow said they hope to close on the construction loan for the project by the end of this month.

Hanchrow worked the land deal with Thalhimer broker David Smith, the latest in a line of transactions between the two that Hanchrow said dates back to the mid-1990s. Prior to joining Bristol, Hanchrow said they worked similar deals for The Carriage Homes at Wyndham and The Madison Apartments in Short Pump. Their local collaborations for Bristol started with Bristol Village at Charter Colony in the early 2000s.

“Dave and I go way back, even before Bristol,” Hanchrow said. “He and I have worked together for a long time and have a great working relationship.”

The apartments will share a 630-space parking deck with Kinsale’s development, which is under construction and likewise estimated at $50 million. The new office building will replace Kinsale’s current home in the Holland Tower at 2221 Edward Holland Drive near Willow Lawn.