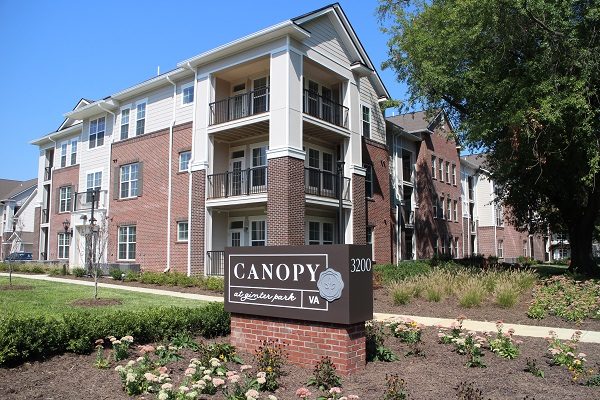 The Brook Road entrance to the Canopy at Ginter Park apartments. (Photos by Jonathan Spiers)

Two years after site work got started, a $55 million Northside apartment project is taking shape and moving in its first residents.

Eight of the 15 residential buildings that ultimately will make up the 301-unit Canopy at Ginter Park apartments have been completed on part of the former Westwood Tract, a previously vacant site at Brook Road and Westwood Avenue catty-corner from Union Presbyterian Seminary.

Completion is anticipated next spring, and leasing got underway about 45 days ago, with 50 leases signed so far and most of those tenants moved in, said Lisa Gunderson, vice president of asset management with Tennessee-based Bristol Development Group. 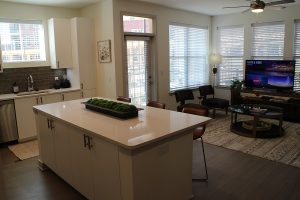 Bristol, which Gunderson said has been active in Richmond for 15 years, was enlisted by the seminary to develop the Canopy at Ginter Park as additional housing options for prospective students and their families.

While Union has said the apartments are intended to attract prospective students and provide them with housing, the market-rate units are open to all, with no priority given or unit blocks reserved for seminary enrollees.

The three-bedroom units will be fitted within the rounded, turret-style structure at the corner of Brook and Westwood, directly across the intersection from the seminary. 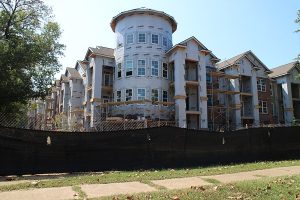 The turret-style structure at the corner of Brok and Westwood will house the complex’s three three-bedroom units.

‘In keeping with the neighborhood’

In addition to the apartment buildings, a clubhouse building also is completed with leasing office, fitness center, a community Wi-Fi lounge, coffee station and a heated saltwater pool. Other amenities include a 24-hour package pickup room, dog spa, bicycle storage, grilling areas and a grassy area for outdoor movie-watching and picnics. 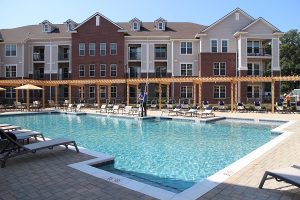 Amenities include a heated saltwater pool.

Gunderson pointed to the bike storage as an example of how Bristol tailored the property to its surroundings, noting as well the City of Richmond’s plan for a bike lane on Brook Road alongside the apartments.

“We always, when we design a community, think about what’s around the community and are sensitive to making sure, for example, that we provide bike storage, because we understand that that’s an activity that’s enjoyed more in this neighborhood,” she said.

Totaling upwards of 380,000 square feet, all of the buildings feature partial brick facades, and most include additional details such as decorative chimneys and dormers that Gunderson acknowledged weren’t required but were desired to better blend the buildings with the surrounding neighborhoods of predominantly single-family homes. 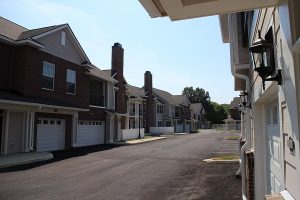 “In the design process, we were very careful and considered all the input that we received to make sure that the character of the exterior of the buildings was in keeping with the neighborhood,” Gunderson said. “We heard that feedback, and we took it to heart.”

Bristol acquired the 15-acre site from the seminary in mid-2017. City property records do not reflect a transaction amount. Union still owns the rest of the 34-acre tract, which remains open space. The tract also includes an urban farm by Midlothian-based Shalom Farms, which has a 10-year renewable lease on its portion of the property.

Years in the making, the project generated opposition from neighbors who challenged Union’s plans with two lawsuits. Opponents contended the tract’s intended use has been for educational or institutional purposes, while the seminary maintained that the land had been zoned since 1953 for multifamily residential use and has long been planned for student apartments. Site work got underway in 2017.

As construction continues on Canopy at Ginter Park, Bristol is seeking a buyer for its most recent Richmond-area project: the 373-unit 2000 West Creek apartments in eastern Goochland County.

Bristol listed the 373,000-square-foot complex this summer, a year after it completed it at a cost of $50 million. Colliers International has the listing, which does not include an asking price.

Gunderson said the timing of the listing is not unusual for Bristol, which she said puts about half of its developments up for sale, depending on the investors and business models involved.

“Generally, that’s the life cycle of the asset: build, lease-up, and that property reached stabilization so quickly,” she said. “That was the determination.”

They look nice. Still, shouldn’t the neighborhood be allowed to dictate that private property be preserved for community use? Oh wait, this is still America.

I don’t mind having apartments there. I do mind that they look so ugly and short pump-y