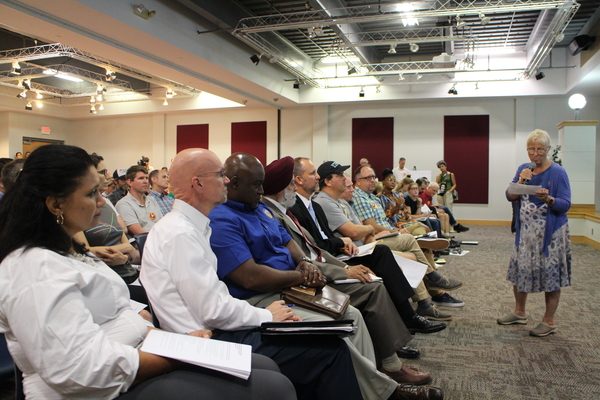 The cycle of debate continues for a proposed Brook Road bike lane in the city’s Northside.

Hundreds attended a meeting convened last week by Richmond councilmembers Kim Gray and Chris Hilbert to discuss the 3.5-mile route for cyclists that the city is considering along Brook Road between Azalea Avenue and West Charity Street.

The project would reduce the road to a single lane in each direction for passing vehicles, while a lane of “floating parking,” along with posts and paint markers, would separate bike traffic from automobile traffic.

Despite years of city planning, Gray and Hilbert introduced an ordinance to City Council in June that effectively stalled progress on the project.

Gray and Hilbert, whose districts include the proposed lane route, said they called the meeting because little community outreach had occurred with residents of their districts.

“Whether it’s bike lanes or interstate highways, the communities need to be involved in any solution,” Gray said. “They have not been a part of this discussion.”

While Gray co-patroned the ordinance that stalled the project, she said she is in favor of a bike lane, just not in favor of the current design.

“I don’t think that this is the best design,” she said. “I’m hearing from all sides and weighing all of those matters. I would love to come to a viable solution that works for everybody.”

The gathering, held last Tuesday at the police training academy on Graham Road, was filled with impassioned commentary and questions from attendees on both sides of the issue.

“Nobody should get hurt or die trying to get from one place to another,” Max Hepp-Buchanan, director of Bike Walk RVA and a Ginter Park resident, said at the meeting. “For many Northside families, this project means a better quality of life in Northside and greater chance that people will get where they need to go safely, regardless of how they get around. Prohibiting its completion is a bad idea.”

Speakers shared anecdotes about their bike commutes and asked about such topics as the bike lane’s potential impact on parking, general traffic flow, vehicle speed reduction and cyclist safety.

Vicky Bray, a nearby resident and vice president of the Sherwood Park Civic Association, questioned the impact of the forthcoming Canopy at Ginter Park apartment complex, under construction catty-corner from the Union Presbyterian Seminary campus at 3401 Brook Road. Bray wondered how the addition of the $50 million, 301-unit complex could increase traffic in the area.

“We are not in favor of the bike lane in its current form,” Bray said. “Currently the apartments being built on Brook are not occupied, but as soon as they become occupied, they will more than double the residents in our neighborhood.”

The apartments are filling about half of the 34-acre Westwood Tract at Brook Road and Westwood Avenue, the rest of which had been included in plans but is not currently slated for development. The tract had long been owned outright by the seminary, until it was transferred last year to an entity controlled by Tennessee-based Bristol Development Group, which is developing the apartments. The seminary maintains a minority interest in that ownership entity.

Bray questioned the fate of the remaining acreage on the site.

“You guys are talking about the fact that you’re looking to the future, you don’t know what the future holds, so what is the future of (the Westwood Tract)?” Bray said. “What could you do to change the zoning for those areas now so that we will not have thousands of apartments on Brook Road in the next couple of years?”

“We don’t have to speculate about what the future land use is,” Sawyer said. “It’s handled right at the moment of the transaction.”

According to Sawyer and Mayor Levar Stoney’s office, a traffic analysis for the bike lane project occurred in November 2016 and indicated that the road’s service level maintained an A or B rating, making it favorable for inclusion of a bike lane.

Some at the meeting questioned whether another traffic study should be done. Officials with the mayor’s office said an additional study could cost the city between $35,000 and $40,000.

“It doesn’t make sense for public dollars to be spent on something that might happen,” Sawyer told BizSense after the meeting. “That’s why it makes sense to do it at the time of development.”

The city’s public works department conducted another study for the bike lane project last year that showed that 65 percent of traffic on Brook Road was traveling above 40 mph, whereas the speed limit for the stretch between Azalea Avenue and Charity Street is 35 mph. The department estimates that the inclusion of bike lanes should cause traffic to decrease in speed, improving safety for cyclists riding along Brook Road.

Union Presbyterian Seminary said it supports the bike lane. Spokesman Mike Frontiero said Bristol Development is considering including several bike-friendly amenities with the apartments, such as bike racks and storage, a repair station, a vending machine with parts for purchase, and potentially an expansion of the city-run RVA Bike Share program that Bristol would pay for.

“The traffic studies were conducted properly and found that the new apartment community would not have significant impact on congestion in the neighborhood,” Frontiero said. “Because of the bicycle-friendly amenities that will be added to the community, it’s highly unlikely that every resident will own a car, much less two cars.”

Don Polaski, a former president of the Sherwood Park association, said he originally was opposed to the apartment construction but now feels the addition of a bike lane could make the surrounding area more appealing.

“No one seems to know what kind of traffic impact this thing can have. That anxiety is showing up all over the place,” Polaski said. “I think this is a time where we have to have leadership that says, ‘This may be inconvenient for a few of you but this is something we need to do because overall, it can make the city a better place.’”

The City Council’s land use, housing and transportation committee slated to discuss the issue, including Gray and Hilbert’s bike lane ordinance, at its meeting tomorrow afternoon.

I assume RVA did not invent the floating parking Lane and bike Lanes as they have been implemented on West Franklin Street, but my experience is that this design is actually more dangerous. I have biked both ways on those Lanes, and it seems much less safe, especially headed east. A biker has no idea if a car can see them when turning left, or is even aware there are bike lanes for which to watch. Also, when driving a car and taking a left off of Franklin, it seems very precarious because one has to look past a car… Read more »

There are improvements on the Brook Rd lane compared to Franklin St. Cars parking too close to the intersections is why making a left turn has become dangerous, the city should enforce proper parking and ticket those vehicles but doesn’t. Brook Rd will have the parking spots painted showing where not to park when close to an intersection, so hopefully that will help. Also Brook Rd will have two lanes, one on each side of the road, going with the flow of traffic.

Oh Richmond. Let’s not fear beautiful progressive change. Let’s aim to be competitive with other great mid size cities. We live on Brook Rd and WELCOME the bike lane.

“The department estimates that the inclusion of bike lanes should cause traffic to decrease in speed, improving safety for cyclists riding along Brook Road.”

This improves safety for everyone – motorists, cyclists, and pedistrians – not just cyclists.

This article left me with the impression that officials of the mayor’s office feel that $35,000 to $40,000 is too much to pay for an additional study yet, the publicly listed annual salary for Jakob Helmboldt, the city’s official bike czar, was $86,333 in 2016. I live in the Fan and ride a bicycle but I feel that the push for bike lanes is being done in a heavy-handed manner. There seems to be an overriding agenda of desperately wanting to keep up with the Jones while we’re being baited by bike lane supporters who imply that critics are backward,… Read more »

A clarification to the article. The seminary still owns the 19 acres of the Westwood Tract that are not being developed. It only sold the 15 acres being developed for the apartments.

Why doesn’t this article mention any statistics as to how many cyclists will use this in a day/month/year? Whatever the number is, how is that worth it to cut lanes off of a road? If the bike lane could be designed in a way that allows the current number of lanes to continue to exist, by all means go for it if the people people desire it. Cutting roads down to install bike lanes makes little sense. The lanes on West Franklin are no good. That is not a design that should be duplicated. As far as the traffic concerns… Read more »