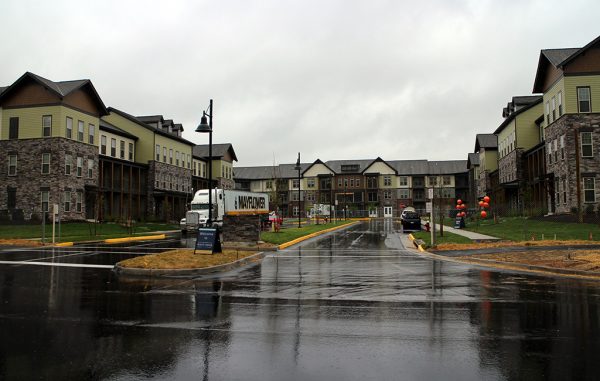 The three-story townhomes line the main entrance to the apartment complex. (Jonathan Spiers)

The evolution of West Creek Business Park is on display along State Route 288, where the first residential development in the corporate park’s core is taking shape beside the West Creek Parkway interchange.

Tennessee-based Bristol Development Group is about halfway complete with construction of its 2000 West Creek development, a $50 million project consisting of 357 one- and two-bedroom apartments and 16 three-story townhome units.

The project – the first residential development in the 3,500-acre park’s original section near Patterson Avenue – fills a 23-acre site in the interchange’s northeastern quadrant, enclosed by 288, West Creek Parkway and Broad Branch Drive, which wraps around the site en route to the south entrance of Capital One’s Goochland campus.

The site is next door to Hardywood Park Craft Brewery’s recently opened West Creek facility, and it’s just down the road from another new user that has added to the park, fellow beer-maker Kindred Spirit Brewing.

Lisa Gunderson, vice president of asset management for Bristol, said the proximity to those breweries and employment centers such as Capital One and the nearby CarMax headquarters made 2000 West Creek an appealing project.

“We’ve known the Pruitts a long time, because we’ve done business here before,” she said, referring to the family behind the Pruitt Cos., which owns and operates West Creek with Riverstone Group, part of Bill Goodwin’s CCA Industries. “We really thought we could create something beautiful that fit into the context of the area.”

Bristol previously had developed the Bristol Village at Charter Colony apartments in Midlothian, its only other local project before Bristol at West Creek. The company also is developing the 301-unit Canopy at Ginter Park, a controversial apartment complex near Union Presbyterian Seminary that is beginning to go vertical. 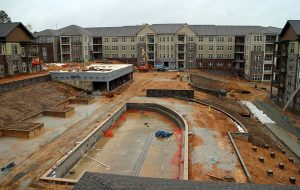 The apartments’ central area will include a pool and fitness facility. (Jonathan Spiers)

Leasing for 2000 West Creek is underway, with the 16 townhomes open and the first of several apartment buildings about 80 percent finished. The company plans to open that building in mid-June, with the rest of the buildings taking shape to be completed in the fall.

Since leasing started six weeks ago, Gunderson said interest has been good, with about five units leased per week on average.

“And that’s without a lot of units open, no amenities to show,” she said. “We’ve been really pleased.”

More residential development is slated for the southern end of West Creek. The Pruitt Cos. is planning a mixed-use development that would include a multifamily component at the former Oak Hill Golf Course property along Patterson Avenue near 288. The park’s northern end along West Broad Street includes the 254-unit Retreat at West Creek and retail and hotel uses.