Trader Joe’s is setting up shop in the city.

The grocer is planning a new store in part of the former Martin’s space in the Stony Point Shopping Center at 3000 Stony Point Road on the city’s Southside, according to planning documents obtained by BizSense.

The grocer is leasing about 14,700 square feet within the 40,000-square-foot building, according to city plans, leaving around 25,000 square feet available for other tenants.

Work has been underway on the shell space’s interior after the city issued a demolition permit in January. On April 15, another permit was filed at the space for a “tenant up fit to a grocery store.” Multiple sources, as well as additional planning documents, confirmed Trader Joe’s is the tenant.

A Trader Joe’s spokeswoman confirmed in an email late Wednesday that the company is working on a Richmond location but did not provide further detail.

“We are working to bring a Trader Joe’s store to Richmond, however, at this time I don’t have any additional information to share, including details regarding an opening date or a timeline,” the email stated.

L.F. Jennings is the general contractor handling construction on the space. New York-based Taylor Associates Architects and local firm Freeman Morgan Architects are the project’s designers. Lory Markham of Markham Planning is listed as contact person on the plans.

It’s unclear whether Trader Joe’s has formally signed a lease for the space. 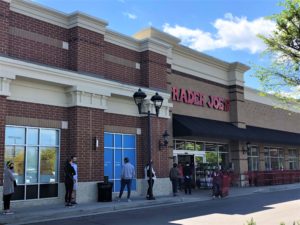 However, plans for the Trader Joe’s list North Carolina-based Stanchion Asset Partners as the project landlord. The grocery shell space is a separate parcel from the rest of the shopping center, and as of press time, city online property records still list Ziff as the parcel’s owner.

It’s unclear whether Stanchion is under contract to purchase the building. Ziff and Stanchion have not responded to requests for comment.

Trader Joe’s has over 500 stores nationwide, including its current lone Richmond-area location at 11331 W. Broad St. in Short Pump.

This location will do very well. I know there has been local chatter hoping for a TJ’s in Chesterfield for a long time. I am glad to see this shopping center regain it’s anchor tenant.

As a resident of this neighborhood, I’m very happy to have this rumor confirmed. This space has been empty for too long and I’m thrilled to have such a quality tenant going in the space.

Welcome to the neighborhood Trader Joe’s!

I am actually very, very surprised by this as it was just last year that customers were emailing TJ and begging them to look at this very spot for a store on this side of the river, and TJ actually put out a press release stating they had no want or desire to open another location in Richmond. Guess things changed…

I was one of those who emailed that this would be a perfect location for a TJ. I am so happy to see this in the works!

Is that technically in the city of Richmond or is it in Chesterfield?

Its very close to the border – that stretch of Huguenot Road is in the county, but all the land on the west side of Huguenot is City of Richmond from Chippenham to Old Gun Road.

I work at that shopping center, it is definitely in the city of Richmond.

Why are so many people concerned about whether the store will be in the city or county? I’ve been told the Publix in the Village Shopping Center actually straddles the county line. Quick, someone must investigate!

not concerned. Interested. If I thought you were serious I’d explain, but it should be obvious to anyone who gives it a bit of thought….

I love it! We are so excited to share this wonderful news that we crashed the site! Please TJ’s please don’t let us down, the sooner the better! We love this area and this shopping center needs you! You will be successful here.