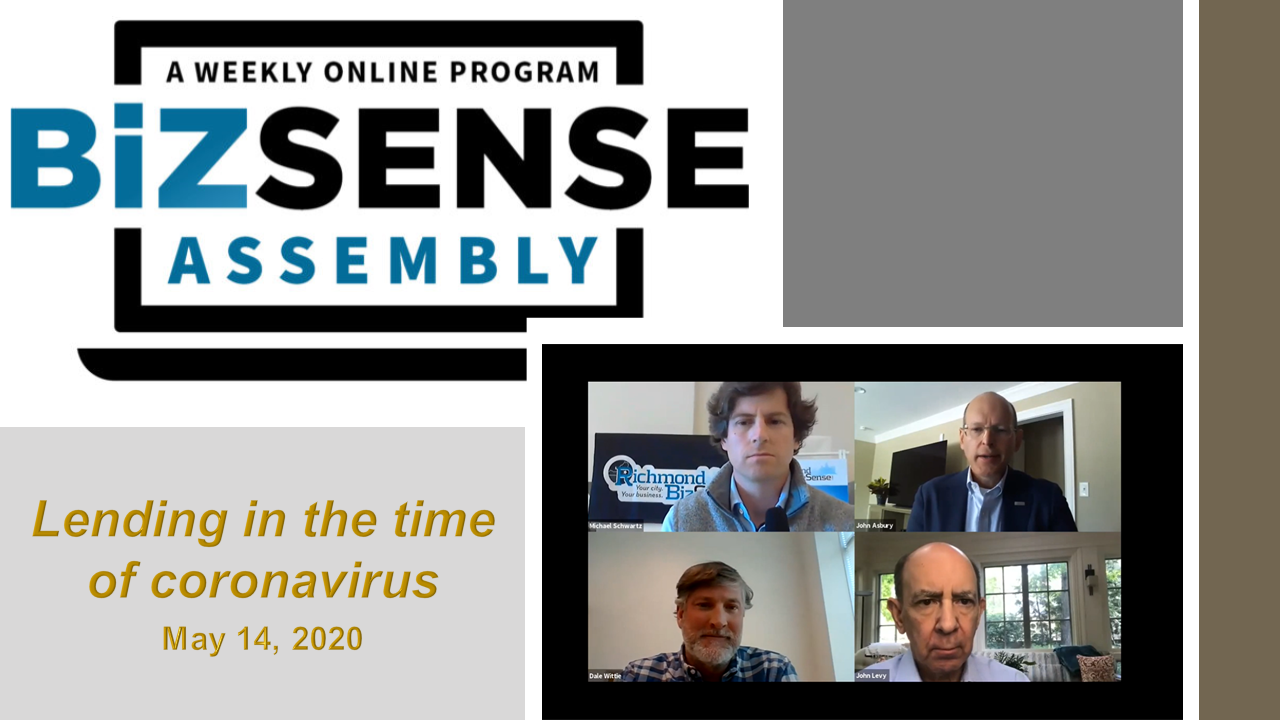 Attempting to decipher the full effects the coronavirus pandemic is having on commercial lending isn’t fun and games.

John Levy, president and namesake of local real estate investment banking firm John B. Levy & Co., described such an exercise as a “thousand-piece jigsaw puzzle that you threw up in the air, had it land, half the pieces are on the backside and now I’m trying to put it back together again. And it’s terribly complex.”

Here are some other highlights and soundbites from Levy and his fellow panelists John Asbury, CEO of Atlantic Union Bankshares, and Dale Wittie, director of rental housing programs at VHDA, as they appeared on this week’s episode of the “BizSense Assembly.”

They discussed a general slowdown in certain forms of commercial real estate lending, the idea of borrowers and lenders working together, and the fundamental soundness of the Richmond market and its local economy.

John Asbury: We started the year strong. Richmond is a tremendous economy with a lot going on, but I would say things have definitely slowed down now.

At this point you’ve seen a definite pullback on the commercial real estate side. Developers are really pausing and trying to assess new projects and, like all of us, trying to get their arms around what is going on here and how long is this going to play out.

Dale Wittie: We’re servicing loans. We’re doing site inspections. The underwriting activity clearly has slowed down a bit due to the uncertainty.

JA: Projects that were under way or approaching (loan) closing, generally those have still closed. Multifamily is arguably among one of the better-positioned commercial real estate products.

On the commercial and industrial side for operating companies (noncommercial real estate), for the most part (loans) that are scheduled to close will close. We’ve certainly not said, ‘We’re not going to fund this loan now.’ It’s more about projects that were being contemplated and borrowers who have decided just to pause and wait this out.

John Levy: It seems to me we’re in the singing “Kumbaya” phase of the recession. People are trying to get along. Very different than ’08 and ’09 when the feeling was that borrowers and real estate people overleveraged and deserved everything they got. We’re in a medically induced recession. I’ve never been in one. Nobody else has either. So I think at least in the short term – maybe that’s three months, maybe that’s six months — people are trying to figure out how do we get along. How do we buy a little time to get to the other side? The long run is much harder to see.

JA: This is not a financial crisis. This is a healthcare crisis that has created an economic crisis. I’m about to be a 33-year banker. I’ve never seen a period where regulators have provided banks more latitude or flexibility. No one is blaming the business community for what we’re experiencing right now. It’s in everyone’s best interest to work together.

Deferrals are common. Hotels, restaurants, retail — many of them are going to be under payment deferrals right now and that’s not something anyone should be shy about asking for. And I think they’ll find banks will be quite accommodating.

DW: We are a patient lender. We have a stabilized portfolio and have offered a formal forbearance program that gives owners 90 days of principal and interest. On the construction portfolio, those we are looking at on a deal-by-deal basis because everyone’s situation is entirely unique. I think we would all agree that our best chance of coming out good on the other end is to be patient and exercise latitude where we can.

JL: We’ve seen in retail for example, one of the deals we have in D.C., which we thought was getting closed, has a 100,000-square-foot movie theater chain that went dark overnight. Those are the kinds of things that require real workouts.

JA: The banking system has never been better capitalized. Admittedly there’s no pandemic stress test. I bet you there will be in the future. We’re living it right now.

This go around the lending system should be part of the solution and not the cause of the problem.

JL: In CMBS or securitized debt, it’s a very different world. You’re dealing with special servicers and the servicing is special, trust me. In every sense of the word.

JA: Few people think we’re going to be in a V-shaped recession. It’s either going to be a U or the latest thing if you read The Wall Street Journal yesterday is the Nike swoosh, with a decline and slower climb out.

DW: Is there interest in the capital markets for bonds? For tax-exempt bonds, we don’t know just yet. We haven’t tested the market. Taxable bonds the same thing, though we have had some success recently. We’ve had two bonds sales in the last few weeks with plenty of investor interest.

JA: Forget what you’re reading in the press; the fact is there’s $120 billion of funding still available as we speak for the Paycheck Protection Program.

JL: I think Richmond is a well-kept secret. We tend to describe it as a first-class second-tier market. Because it’s much better than most people realize.

DW: Clearly it has been the most active market at least for the last three years.

JA: Richmond continues to be one of our most robust markets. The fundamentals of Richmond are just tremendous. The underpinnings are solid.

BizSense Assembly is held every Wednesday at 11 a.m., each week with a focus on a different industry and with a new slate of panelists. Click here for details on next week’s episode. Half of proceeds from ticket sales go to Feed More.