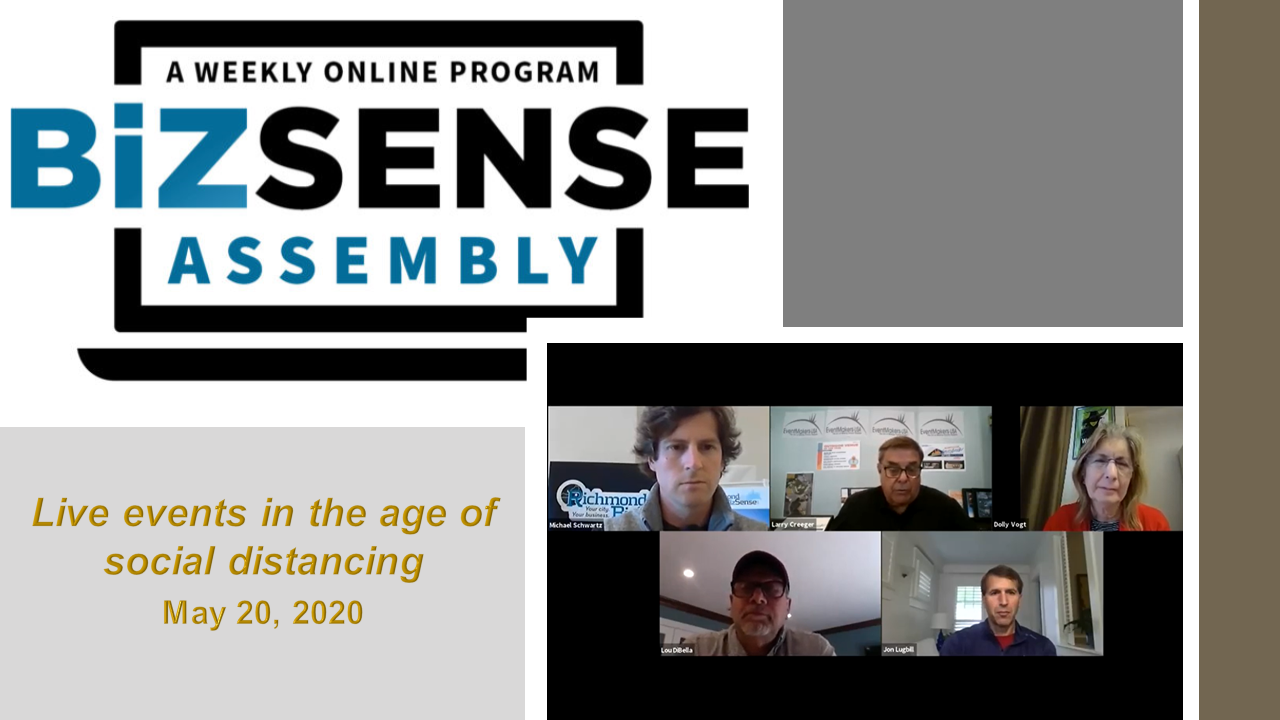 From minor league baseball to concerts and musicals, organizers of large, in-person events in Richmond have a lot of unknowns to tackle as they look to come back from the coronavirus shutdown.

The latest installment of BizSense Assembly, a weekly online panel discussion series, on Wednesday featured local event operators who said it was essentially a waiting game until public health conditions improve to the point they can hold their usual money-making events.

As the coronavirus pandemic picked up momentum this year, DiBella realized the baseball season was likely a wash. As the prospects of a season continue to fade, DiBella and his crew have focused on maintaining the Squirrels as a public presence.

“I didn’t have to make a lot of calls. They were made for me,” DiBella said of the early days of the pandemic. “It became clear immediately that the season was in jeopardy and at least part of the season would be lost.”

The team has sought to keep itself in the public eye with fundraisers and special events, such as offering ballpark food for curbside sales, which it announced this week.

“We’re out there and we’re still trying to remain connected to everybody,” DiBella said. “We can’t let the brand die even if I can’t put the product on the field.”

The logistics of baseball, such as moving teams around on buses, is too much of a health risk, even if they were to play empty stadiums. And DiBella said there isn’t enough money to be made in streaming minor league games which never could make up for the loss of the real money makers such as food and merchandise sales on game day.

How best to spend limited funds is an ongoing challenge, not just for the Squirrels but for other event organizers as well, he said.

“There’s also an issue that everyone on this call faces in terms of what kind of chances you want to take with respect to rescheduling; How much money you want to put out in an environment where money is everything because we all are hurting badly. We’re not bringing in revenue. We’re playing with reserves at this point,” he said.

Sports Backers, which runs events like the Ukrop’s Monument Avenue 10K and Dominion Riverrock, has canceled its spring events. While it’s been able to develop some new online and socially distanced programming, there are ongoing conversations about what in-person events might look like in the near future, Lugbill said.

The nonprofit has pivoted to providing fitness classes through Zoom. It’s also created new programming such as the RVA Taco Trot 5K, a virtually based footrace that attracted 1,700 participants. But the big unknown that remains is how to revive large-scale events and preserve their built-in community-building aspect.

The Monument Avenue 10K has been postponed to the fall, and it’ll look different from other years. There might not be a finish-line celebration and the course might change.

“Those things are still to be decided,” Lugbill said. “I think our staff and volunteers have really accepted the challenge. This is not going to be easy, it’s definitely not as profitable and it won’t be as good.

“We think it is better to do our best with what we can than it is to sit back and try to hunker down and try to wait out the storm and not do anything. In our case, we think there is a way to safely do this.”

Local concert venues are rescheduling spring programs for the summer or fall. As calendars get rewritten, event organizers are weighing how to utilize their spaces.

Local ASM Global properties had a strong start to the year that has fallen off as events have been canceled. Most previously scheduled spring concerts have been pushed back to the fall, Vogt said.

“Most of our stuff has moved into the late fall, into 2021. Numerous concerts have canceled because tours have canceled,” she said. “Some of our Broadway shows have moved five times.”

Vogt said the company is rethinking how seating will work at venues such as the Altria Theater. Spacing patrons out means a smaller usable capacity, and concerts may feature temperature checks and mask requirements. An 80-piece orchestra could wind up as a 10-person crew on stage instead.

“It’s going to be a different concert experience than you would normally have,” she said.

Innsbrook After Hours, an outdoor concert series, faces many of the same issues as ASM Global’s venues, though Creeger said his open-air venue would offer some logistical flexibility. They’re still booking acts, though some have been postponed to the summer and the season is expected to continue into the fall.

“The fact of the matter is, not only are we trying to keep the season for our patrons and our foundations and to a large extent our vendors … we’re basically doing it, to some extent, for the talent itself,” he said.

But while there are challenges and details to be worked out, Creeger said would-be patrons demonstrated an appetite for events planned for the summer.

“We post a show on Facebook, the internet, whatever. Invariably, someone will jump out and make a comment about, ‘How can you be irresponsible announcing shows right now?’ We don’t have to respond because within two or three minutes there’s five or 10 people saying, ‘What are you talking about? This is awesome. We’re so excited for the summer.’ It gives them hope,” he said. “I think they all know. People know it’s a moving target. … they have that desire to get out.”

BizSense Assembly is held live every Wednesday at 11 a.m., each week with a focus on a different industry and with a new slate of panelists. Half of proceeds from ticket sales go to Feed More. Assembly is taking a break May 27, and the date and topic of the next Assembly will be announced in the near future.