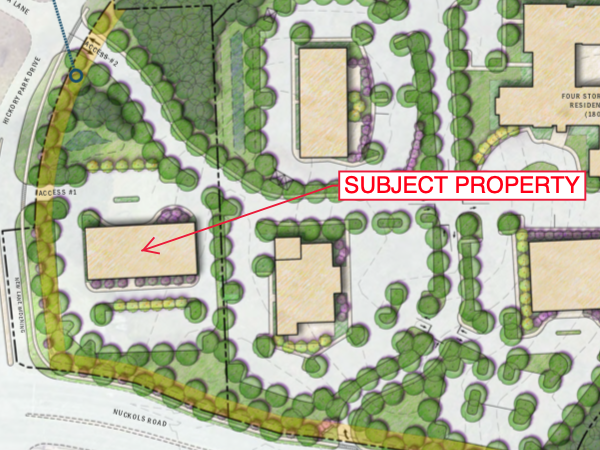 HCA has withdrawn a proposal to rezone land at the intersection of Nuckols Road and Hickory Park Drive in Henrico County to pave the way for a new medical facility. (Courtesy Henrico County)

HCA Healthcare has pumped the brakes on plans for an emergency medical center in Henrico County, withdrawing the rezoning application needed to pave the way to construction.

The hospital chain had its eye on a 24-hour, 11,000-square-foot facility on about 3 acres at the intersection of Nuckols Road and Hickory Park Drive near Innsbrook. Its proposal included a full laboratory and would be similar to other emergency centers the health system operates.

The Planning Commission voted to recommend approval of the rezoning in March. While the application appeared on the agenda of the Board of Supervisors earlier this month, it wasn’t acted on because the health system had withdrawn its application.

Planning Director Joe Emerson said no reason was given for why the application was withdrawn. An HCA spokesman didn’t respond to requests for comment and it’s unclear whether the proposal may return for the board’s consideration. The board has final say over the rezoning request, and the land in question needs to be rezoned before the facility can be built.

The property consists of three parcels currently zoned A-1 agricultural or B-1 business. If approved, the application would have rezoned the land to O-2C office. Two of the parcels are owned by Forrest Urban, according to county records. The third parcel is owned by HHHunt Holloway LLC.

HCA’s facility would have joined other upcoming medical centers in the region.

VCU Health plans to open a $16 million emergency center in New Kent County on June 1, officials announced May 8. The center was previously scheduled to open earlier this spring, but the timeline was disrupted by the coronavirus pandemic.

A proposal to rezone land to make way for a pair of medical offices in Mechanicsville was recommended by the Hanover Planning Commission in April, and the proposal is scheduled to be considered by county supervisors this month.