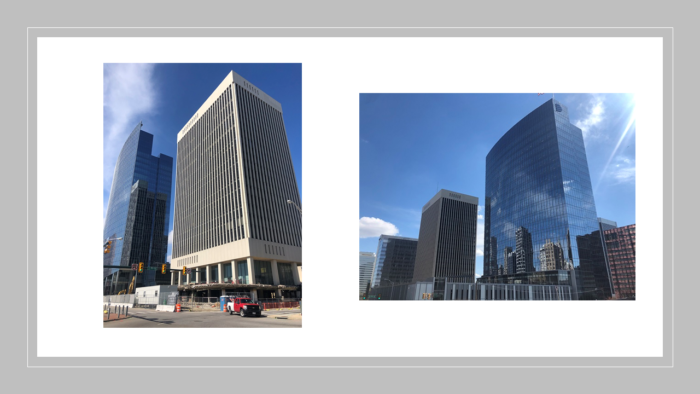 Dominion Energy will carry out the implosion of its One James River Plaza office tower (left) this weekend. (BizSense file photos)

Downtown Richmond has been pretty quiet of late thanks to the coronavirus. But there will be plenty of action during the wee hours of the morning on May 30.

That’s when resident utility giant Dominion Energy will carry out the implosion of its One James River Plaza office tower at 701 E. Cary St.

The toppling of the 21-story, 1970s-era building, being handled by Hourigan|Clayco and D.H. Griffin, is set for early that Saturday morning, sometime around 7 a.m.

While it’ll be a sight to see, getting anywhere near the implosion site will be off limits, based on warnings from Dominion and a traffic and street closure plan in place with the city.

Most importantly, Dominion said a larger restricted zone encompassing 15 blocks around the site will be closed to pedestrian and vehicle traffic beginning around 5:45 the morning of the implosion. The zone encompasses the south side of East Main Street from 10th to Fifth Streets to the north side of East Byrd Street, also from Fifth to 10th Streets.

The bulk of that zone will reopen later that day, with the exception of the individual street closures mentioned above. Those closures all will end in the first week of June following cleanup.

Dominion said in a release last week, “no public gatherings are planned or encouraged,” but the company will be live streaming the implosion through Facebook.

The company also warned downtown residents to stay indoors and keep doors and windows closed an hour before and after the implosion, and to be mindful of lingering dust from the demolition.

The implosion is made possible by the completion last year of 600 Canal Place, Dominion’s glassy 20-story, 1-million-square-foot tower at 600 E. Canal St.

It is now occupied by more than 1,000 Dominion employees, including some that had worked in One James.

Removal of the aging tower will free up the site for future development, though Dominion still won’t say for certain what will become of it.

The company previously announced and filed plans with the city for a second tower, dubbed 700 Canal Place, with a design that would mirror 600 Canal, albeit slightly shorter. It would rise 17 stories and hold more than 900,000 square feet. The two towers would be connected via a sky bridge over South Seventh Street.

Plans show Hourigan and Clayco as the general contractors for the second tower. Houston-based architecture firm Kendall/Heaton Associates has been selected as the architect of record, and the Timmons Group is the civil engineer.

Should the company go that route, the new tower would be expected to be completed by the end of 2023.

However it has remained noncommittal, at least publicly, as to whether it intends to build the tower.

Wait. New office construction. What about everyone working remotely in the future?

Yes! Working remotely from the office!

Remember when Dominion said they would only build the new tower upon passing the TIF district, which would have included both towers, during Navy Hill negotiations?

They will be lowering their tax obligation to the City by carrying out this demolition. And conveniently only wanted to build upon ratification of the TIF inclusion. My understanding is there is currently no timetable nor proposal for a new building awaiting approval from City Hall. This will merely be an empty lot, until… Please correct me if I’m wrong.

Why would anyone want to maintain or insure (good luck with that) an empty building? Won’t the demo just make it a more marketable plot of land for future development?

Hey Ashley. My quick comment was meant to address to 700 Canal Place comment, “Should the company go that route, the new tower would be expected to be completed by the end of 2023.” I did a quick read, so maybe I got it wrong.