Three thousand pounds of explosives and about 16 seconds.

The crew in charge of the complex undertaking, D.H. Griffin Wrecking Co. and
Controlled Demolition Inc. (CDI), this week caught up with BizSense to discuss all that’s involved with the process.

D.H. Griffin and CDI were hired by Hourigan and Clayco, the construction and development firms handling the process for Dominion.

Both D.H. Griffin and CDI have plenty of experience tearing things down in Richmond. D.H. Griffin has had an office here since 2004. CDI has done five implosions in the city – the first of which was in 1962 and the most recent being the old Chesapeake & Ohio office building in 1985.

But before dynamite and implosions came into the picture, D.H. Griffin’s Ken Tysinger said the first step is determining whether a structure is a good candidate for implosion versus traditional piece-by-piece demolition.

The main factors in that decision, Tysinger said, are height of the building and its proximity to adjacent structures. In this case, OJR is 340-some feet high from basement to the top.

That’s stretching the limits of the typical equipment that would be used to do a traditional demolition, Tysinger said.

“You need some help to bring it down. That’s when we call gravity,” he said.

Add to that the proximity of the site to two newer, glassy buildings, Gateway Plaza and Dominion’s 600 Canal Place, which sit on either side of OJR.

Dust from demolition is also a consideration. Basically, one must decide whether it’s more disruptive to have all the dust in one big cloud all at once on a weekend morning or the constant presence of dust over months from a traditional demolition.

“There’s going to be dust generated,” said CDI’s Mark Loizeaux. “It’s the same type of dust that would have been generated by demolition over months and months.”

Once implosion was chosen as the preferred route, D.H. Griffin crews came in and began what they call “soft demolition,” tearing up parts of the base of the building and gutting the inside of any environmentally hazardous materials. 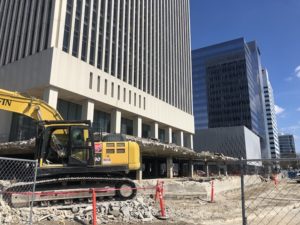 A close-up of the forthcoming demolition site. (BizSense file photo)

“Then we end up with basically a skeleton and that’s where CDI entered into the picture,” Tysinger said.

Loizeaux said CDI began analyzing the site in February and has since drilled 2,500 holes across 13 levels of the building. Those holes were then filled with 3,270 pounds of dynamite, all of which were connected by 3.4 miles of initiation detonating charges.

The charges are detonated in sequences, first to tilt the structure slightly to the north and then to cause it to break up more and lean to fall into the center pit of the site, which the group calls “the bathtub.”

Hundreds of so-called micro delays are also built in to help control the noise to prevent damage to neighboring windows.

All of that will take 16.5 seconds. Dominion would not disclose the cost of the job.

Then comes the dust cloud and the cleanup.

“The dust is going to travel somewhat with whatever prevailing breeze there is – right now (expected to be) coming out of the west. So if people can simply stay back … ” Loizeaux said.

Dominion and the city have in place traffic and pedestrian restrictions to protect the public before and after the event.

A larger restricted zone encompassing 15 blocks around the site will be closed to pedestrian and vehicle traffic beginning around 5:45 Saturday morning. The zone encompasses the south side of East Main Street from 10th to Fifth Streets to the north side of East Byrd Street, also from Fifth to 10th Streets.

“We would like to see people stay home,” Loizeaux said. “If people have a need to come out, it’s important they follow the guidelines and the safety perimeter.”

Dominion said in a release last week, “no public gatherings are planned or encouraged,” but the company will be live streaming the implosion through Facebook.

The company also warned downtown residents to stay indoors, keep doors and windows closed an hour before and after the implosion, and to be mindful of lingering dust from the demolition.

The bulk of the zone will reopen Saturday afternoon, with the exception of the individual street closures mentioned above. Those closures all will end at some point next week.

Site cleanup will run through the summer, Tysinger said. The crews expect to recycle 94 to 96 percent of all the material that comes down in the implosion. Some of that will go to local crushers to likely be used in other area construction projects.

In the end, Tysinger said the crews are tasked with leaving Dominion an “empty bath tub so to speak,” pending Dominion’s decision to move forward on future developments.

Those future developments are still up in the air, according to Dominion. The company previously announced and filed plans with the city to build a tower on the site. It was dubbed 700 Canal Place, with a design that would mirror 600 Canal, albeit slightly shorter. It would rise 17 stories and hold more than 900,000 square feet. The two towers would be connected via a sky bridge over South Seventh Street.

Dominion, however, has remained noncommittal, at least publicly, as to whether it intends to build the tower.