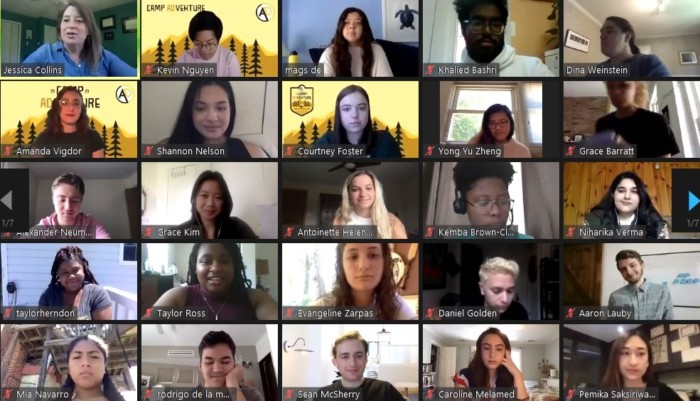 A screenshot from the initial session earlier this week.

Robbed of their spring semester and the summer internships they were expecting, a group of VCU students and Class of 2020 graduates are taking their adventures in advertising into their own hands.

This week marks the start of “Camp ADventure,” a virtual advertising summer camp that students in VCU’s Robertson School of Media and Culture organized in May, amid the COVID-19 pandemic that cut their schoolyear short.

The free eight-week program by the VCU ad club has 200 “campers” signed on, hailing from 64 colleges and universities across the country. It also has attracted some big names in the industry, from creative hubs such as Disney and Richmond’s own The Martin Agency, who are participating as mentors or featured speakers. 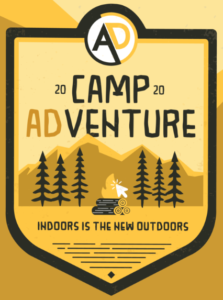 The program is intended to connect recent graduates and undergrads across the country and provide hands-on experience and networking opportunities through workshops, group projects and competitive campaign work for a real-world client: the International Centre for Missing & Exploited Children.

In the span of two weeks, students formulated the idea with a faculty advisor, fielded interest through online surveys, and came up with the “summer camp” theme and branding, complete with lingo like “campfire sessions” for their weekly Zoom calls with guest speakers.

Nguyen, whose distanced internship has kept him based in Richmond, said the idea for Camp ADventure came about from a conversation he had with Courtney Foster, a December VCU grad who now works at Martin.

“This summer, almost everyone’s internship was cancelled. Fortunately for me, mine was not. I had a lot of guilt, survivor’s guilt in a sense, and then Courtney felt really passionate about giving back to the community,” Nguyen said.

“In the survey, a lot of people were saying that they are craving for their summer experience to have some sort of connection with other people and the chance to network. That’s kind of where Camp ADventure started,” he said. 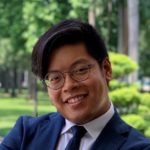 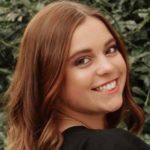 Martin Agency CEO Kristen Cavallo signed on as a speaker, and similar support came from the VCU Brandcenter, which likewise has had to adapt to virtual programming, holding its annual recruiter session online last month.

Several Brandcenter alums were brought into the speaker lineup, including Melissa Cabral, head of strategy at L.A. agency The Many; Everett Ching, a freelance creative director who has worked with brands such as Peloton, Adidas and Google Chrome; and Mary Toves, a creative director at Disney.

Other speakers include Ron Carey, CEO of Richmond-based Tilt Creative + Production; Jennifer Costello, head of strategy at TBWA/Chiat Day in L.A.; and NiRey Reynolds, education manager with The One Club for Creativity, a New York-based nonprofit that last year hosted a training event in Richmond in collaboration with VCU and the Brandcenter.

Jessica Collins, an assistant professor with the Robertson School’s ad program, assisted the students with Camp ADventure as faculty advisor. She called the summer camp program and how it came about “the highlight of my professional career.”

“For lack of better words, I have to pinch myself,” Collins said in an email. “An idea to create some good and hope for students has spread to a national initiative that is going to impact so many lives.

“As we started formulating the idea, the interest was overwhelming. And we started to believe that we could build such a unique opportunity for students that have really experienced a lot of professional loss this summer. They are all hungry to keep going, to return to a sense of normalcy, and I am so honored our team could provide some of that back to them.”

Other notable names involved include Converse, Google, Facebook, Leo Burnett, MullenLowe, R/GA, Pinterest and Twitter. Beyond name recognition for their companies by participating, Nguyen said all are contributing their time for free, with no sponsorships or significant program costs involved.

Nguyen also noted the work of his former club mates, including new president Allison Farrell, who designed the logo and led the program’s branding, vice president Ethan Parker, and fellow students Khalied Bashri and Michelle Meed, who helped coordinate and plan the program.

After the eight weeks, participants will be awarded a Camp ADventure badge to add to their portfolios, and have their portfolios and bios posted on the camp’s website, providing visibility to recruiters and networking opportunities that Nguyen said students need more so in light of the pandemic.

“I think collectively everyone is feeling some sense of sadness for the Class of 2020 and what’s going on outside. A lot of our mentors and recruiters that are participating in this are really just doing this out of the goodness of their heart, and are just really excited to give back to incoming students,” Nguyen said.

“Most of them have said things like, ‘I wish I had this program when I was going through school.’ Part of that is why we’re doing this,” he said.