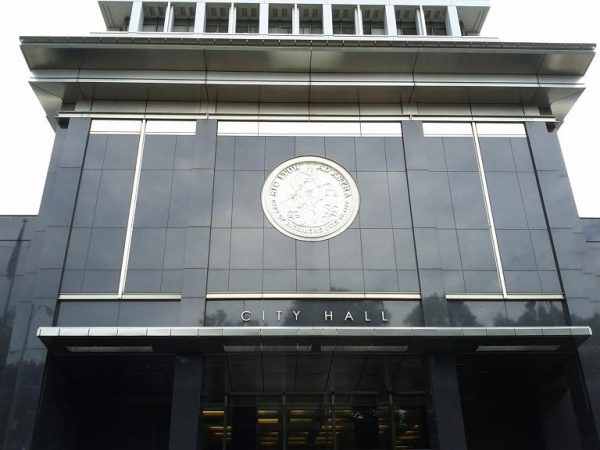 In a special meeting Monday, council voted unanimously to request that city administrators create a program and identify funding sources to provide grants to restaurants affected by the coronavirus pandemic. 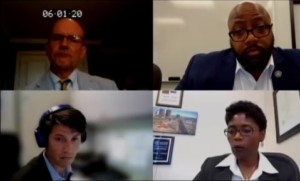 The grants, to be administered by the city’s Economic Development Authority, would add to other support programs that the city has implemented thus far, such as purchasing meals from restaurants to feed first responders and a $1 million disaster loan program for small businesses.

Details of the grant program are being ironed out and would be presented to council at an upcoming meeting. Administrators said they have identified as much as $3 million in funding that could be put toward a grant program not only for restaurants but also for all small and minority-owned businesses in the city.

Administrators and some council members cautioned against providing additional assistance to restaurants specifically, advocating instead for broader help citywide for small and minority-owned businesses across all affected industries.

But councilmember Kim Gray, who proposed the measure along with Kristen Larson and Reva Trammell, said the restaurant assistance is warranted in light of the city’s reliance on meals tax revenues, which support about 7 percent of the city’s general fund budget.

“We depend on those meals taxes heavily for our children, for our schools, for our infrastructure,” Gray said, noting that a portion of the revenues are used to leverage funding for school facilities.

Gray added that, pre-pandemic, the city had projected to receive nearly $47 million in meals tax revenue in the coming fiscal year, which starts July 1. It now expects to receive $4.7 million less, a 10 percent reduction reflected in recent amendments to the FY21 budget, which council adopted last month by a 5-4 vote.

Of the proposed program, Gray said, “This is not to the exclusion of any other businesses, but there is a reason, and it should be a very selfish reason on the part of the city, to make sure that our restaurants can emerge from this crisis, as several of them will not. Several of them have gone away forever.” 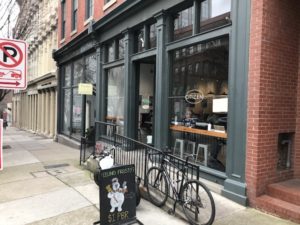 Citizen restaurant was among the first local casualties to the coronavirus shutdown. (BizSense file)

Beyond restaurants that have permanently closed amid the pandemic – Citizen, Billy Jack’s Shack and Morton’s among them – the impact of restrictions on restaurants’ operations has been evident for months, and is starting to be reflected in the city’s financials.

The city’s latest financial report, for the month of April, shows a stark decrease in meals tax revenue received that month compared to previous months, when the pandemic was just starting to affect the local economy.

The city reported collecting $2.11 million in meals taxes in April, compared to $3.42 million in March. The April amount is less than half what the city collected the same month a year earlier, when it collected $5.09 million.

John Wack, the city’s finance director, cautioned that the numbers may not accurately reflect the full impact of the pandemic on restaurants, describing the numbers as unaudited snapshots in time. He said the timing of when tax payments are received – the beginning of one month versus the end of the previous month, for example – could affect the tallies, which are presented in the reports as year-to-date figures.

The lower collection amount for April also could reflect fewer payments resulting from a tax amnesty program that council adopted last month. The program provides amnesty for all penalties and interest on most local taxes, including the meals tax, due between March 13 and June 30.

Program in the works 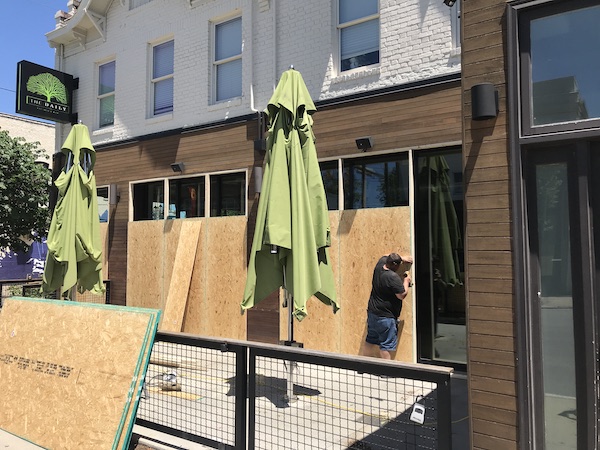 Windows were boarded up this week at The Daily Kitchen & Bar in Carytown. (Mike Platania)

Gray said the grant proposal developed from discussions with Larson, who said restaurants in the city have been further impacted by delays in Richmond’s phased reopening. Once the city was set to enter the first phase of the state’s reopening guidelines, Larson noted, aftermath from the recent protests for George Floyd caused several downtown restaurants and other businesses to remain closed. 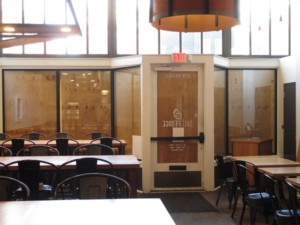 “Any little bit we could give that community right now, it would be prudent for us to do that.”

In late March, Gray proposed rescinding the meals tax altogether for the months of February through April. That proposal did not gain traction, however, as Gray said it failed to get out of committee.

Gray suggested Monday that the grant program could be supported with Community Development Block Grant funding or funds received through the federal CARES Act. Lincoln Saunders, chief of staff to Mayor Levar Stoney, said administrators are assessing how CARES funding could be allocated to cover current and pending expenditures stemming from the pandemic.

Saunders said officials are finalizing a program that could provide $3 million in grants for small and minority-owned businesses across the city. He also noted other efforts underway to assist businesses, such as requested extensions for businesses to meet rehiring requirements to remain eligible for federal Paycheck Protection Program loans.

Saunders also said the city is looking at ways to provide restaurants with food delivery services at lower commission rates than those charged by national delivery apps. Citing media coverage of restaurants being charged those fees while reliant on to-go orders as their dining rooms are closed, Saunders said the city is in talks with local delivery companies on how to provide the service at a reduced or no-commission rate.

Economic Development Director Leonard Sledge said he’s preparing a presentation to council on all of the city’s business assistance efforts related to the pandemic, as well as an update on efforts to develop a long-range economic development plan for the city.

In addition to the disaster loan program, which as of Friday had doled out nearly $835,000 over 43 loans, Sledge said the city had budgeted $520,000 for its first-responder meals program, which in its sixth week had 40 restaurants participating. He said other pandemic-specific efforts have included providing reopening assistance and assets to businesses through its Forward RVA initiative.

“We absolutely recognize the importance and the prominence of the restaurant industry and community in the city, but we would be remiss if we didn’t also acknowledge the financial challenges created by the COVID-19 pandemic on a wider array of businesses in the city as well,” Sledge said.

President Cynthia Newbille asked that Sledge provide his overview to council on Monday, noting that challenges facing businesses have only increased in recent weeks.

“I drove through the city, and there are businesses that are burnt out, businesses that will need support,” Newbille said. “I feel an absolute sense of urgency at this time to be responsive to the full spectrum of businesses.”

Also known as, “I guess we have to do something now.”

So you shut down the restaurants, then they get vandalized and now they need a bale out so you can collect your meals tax. Here’s an idea, open the restaurants back up and trust the people who shouldn’t be out to stay home. To simple for you? How about we remove all the monuments from the “City of Monuments” so that Richmond will no longer be a tourists destination to see, oh I don’t know, the monuments and that way they wouldn’t be staying in the hotels and eating in the resturants that you collect your meals tax. It’s fun… Read more »

Richmond’s tourism has never been solely focused on the monuments. There are plenty of other things to see and do in Richmond that are much more representative of the city. Besides, once the monuments get moved to museums where they belong, tourists can go there and pay money to enter, instead of standing on a strip of grass and starting a faux celebratory symbol of the Jim Crow era without context.

I note that you referred to a “monument.” Are “monuments” in a museum really monuments? Once the monuments start being eliminated, it will change the history of Monument Avenue forever.

Matt; The current statues were not carved out of a mountain by a burst of lightning and delivered to Monement by angels. People put them up and people can take them down. You’re going to have the big news of them coming down. (Hurry and book your room , last chance to see Old Monument Ave!!!) Big news about what to put up in ther place. (Run a global contest to get the best designs for new statues, have a big vote to decide what goes there.) And a new grand opening when they are replaced. (Every hotel that is… Read more »

Change the History? Not hardly. Change the Future? definitely. Regardless, why is change bad?

Every day that goes by changes Monument Avenue as well as everything else on earth. That’s what history is.

Thanks for the feedback below. I want to make it clear I was talking about the history of Monument Avenue. It’s on the National Register of Historic places due in some part to this monument. I can’t believe a single person, even the governor, can do this without clear authority. I do agree with much that was said below regarding changes in general. It would be great if there were formal discussions and decisions based on those discussions. Most can’t change a window style in this area, much less and entire structure, without more than a simple wave of wand.… Read more »

This has been talked about for years, so there is no point in more debate.

Plus, I garuntee there will be lawsuits, I am a little supirsed it has taken this long to get one of the ground.

Anyone want to take bets on Amanda Chase chaining herself to the Lee Monument before the election?

What museum would really want to take the statues and open themselves to future attacks and destruction?

The whole ‘put them in a museum’ argument is simply a distraction.

Go ahead Northam and Stoney – take them down and get rid of them, then get ready for the next set of demands.

There’s a museum of the confederacy in Appomattax. There problem solved…

You happen to see what happened the the Daughters of the Confederacy building this past week?

Don’t know or care. I’m not for the destruction of any property or business.It serves purpose of no one and sadly taxpayers get stuck with the bill.

This is a minor thing, but I see RBS spelling the councilwoman’s name consistently as Trammel, but I have seen it spelled Trammell for decades previously and pretty sure that is the correct spelling.

I love how the attention by council seems to be focused solely on declining tax revenues. There seems to be little concern for the actual plight of the restaurant owners or their employees.