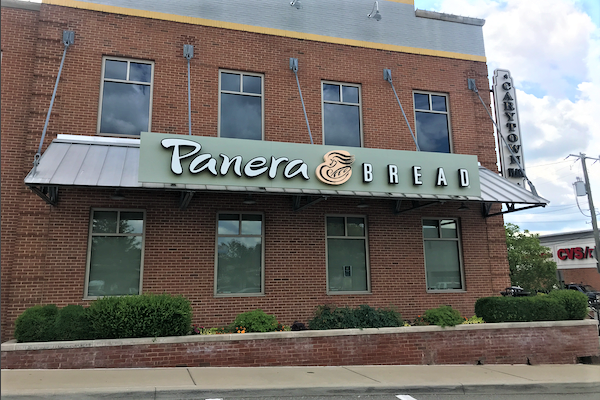 Panera’s move to close its Carytown location for good comes as the upcoming Carytown Exchange retail development starts to take shape nearby. (Photos by Mike Platania)

Another local outpost of Panera Bread has hit the chopping block, this time in Carytown.

The restaurant chain’s location at 10 N. Nansemond St. in the Carytown Place shopping center is permanently closed. The closure follows that of the Panera outpost in Stony Point Fashion Park.

It’s unclear when or why the Carytown Panera permanently closed. The restaurant didn’t alert Maryland Financial Investors, which manages the center, about the closing, property manager Scott Cherry said.

“We found out about it the same way the community did,” Cherry said.

A call to the phone number listed for the restaurant went directly to an automated message that stated the location had permanently closed, and there was a sign on the restaurant’s door that stated it was closed for good. Panera didn’t respond to a request for comment Friday. 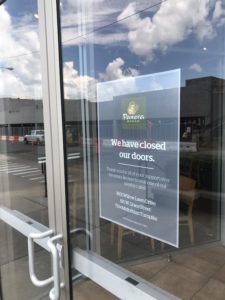 Panera had leased 4,250 square feet at Carytown Place, and the restaurant moved into the shopping center in late 2012, Cherry said. Carytown Place has 40,000 square feet. The center is anchored by a Fresh Market and also is home to a Chipotle Mexican Grill.

Cherry said no plans for the space Panera vacated have been made yet.

Panera, a chain of restaurants that serves soups, sandwiches and salads, exits Carytown just as a sizable retail development takes shape across the street.

The Carytown Exchange is an upcoming retail development of 120,000 square feet anchored by a 49,000-square-foot Publix and featuring retail outparcels facing Cary Street and Ellwood Avenue.

Regency Centers, a Florida-based company is the project developer behind the $40 million development. Carytown Exchange sits on the former site of Richmond Shopping Center, which was razed to make way for the development.

Panera has 17 locations in the Richmond area, according to its website. The Missouri-based chain, which is privately held by JAB Holding Co., has more than 2,000 locations in the United States and Canada.

Now they are “outparcels” on Cary Street. Are they now planning to sell/lease them out like this is West Broad in Short Pump. Remember they have “delayed” the Cary street facades so is this reference to outparcels means the storefront won’t get constructed?