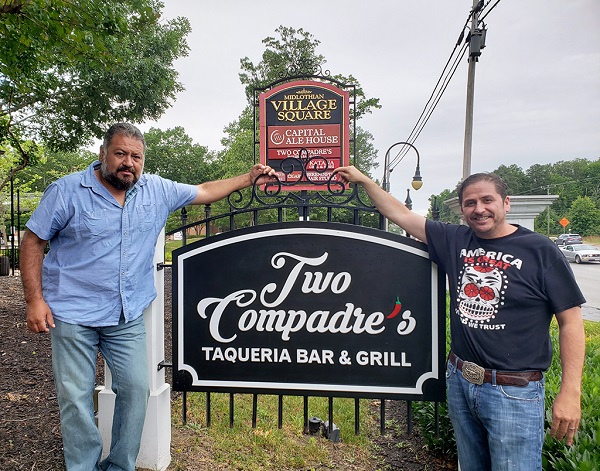 For his fourth area eatery, veteran local restaurateur Eduardo “Lalo” Macias settled on a name that’s fitting for a venture he’s starting with a longtime friend.

Macias has enough confidence in his business and in the new concept that he has four to five more Two Compadre’s locations in as many years in mind, if all goes well.

“People love me, and I love people. That’s why I think anywhere I go and I open, I have that confidence in me, and of course, the Lord,” said Macias. “I make great food, and I cook it with love. We do things with love, and that’s what makes me successful.”

Macias and De La Rosa each have invested $110,000 in the eatery. The two met through family while working in a Mexican restaurant and now consider themselves family. De La Rosa is the godfather of Macias’ daughter.

“I’ve always tried to get in the restaurant business,” De La Rosa said. “I love to cook, and I always cook in my house. I’m involved in a lot of things with Lalo … (he’s) an honest man, so I trust him.”

Two Compadres is taking over the space formerly home to Café Caturra.

Two Compadre’s would’ve debuted on June 1, but construction was delayed a few weeks because of the pandemic. When complete, the space will feature a patio with outdoor seating, a private party room, a full bar with TVs and live music on the weekends.

Macias said Two Compadre’s will differ slightly from his other restaurants. He hopes to draw everyone from families to both young and older adults as a taqueria with homemade tortillas and authentic tacos. It will have seafood and steak, not just burritos and enchiladas.

“I’m with the idea of getting better,” Macias said. “Every restaurant that opens, they do the same thing, so I try to make it a little bit different (and) be me. It’s my own recipes; it’s my own changes.”

Nearby Mexican restaurants include El Cerro Azul, just a half-mile away in Midlothian; Plaza Azteca in Westchester Commons; and Casa Grande off Midlothian Turnpike. Macias notes that all have been successful, and he thinks Two Compadre’s will be most similar to Plaza Azteca.

Macias said he hopes his new spot’s layout, service and homemade tortillas will set it apart.

Macias, 41, was born in Hollister, California. He grew up in a huge family – he was one of 18 children – in Jalisco, Mexico. He came to Richmond at age 16 and worked in construction before going to work at a Mexican restaurant. He started as a busboy and has worked as a waiter, cook, dishwasher, bartender, manager and owner in the 25 years since.

He hopes the new restaurant will provide not only an excellent experience for guests, but also jobs for at least five family members and family friends.

“Sometimes, you know, I tell you the truth, I don’t make a lot of money. Sometimes, I just pay people because they need a job,” Macias said. “I’ve got family, they come to work, and it’s the only job they have. Having these new locations, of course it’s making money, but I don’t want to be rich.”

Moved here from South Florida and Chicano’s is hands-down our favorite Latin food in the city, so glad a sister restaurant is coming to Midlo!

¡Excelente! I think this is a great idea for our community…Can’t wait to visit – Bienvenidos a Midlothian!

I’m sure the food will be delicious and I wish the comnpadres all the best, but the name of the restaurant makes them look like amateurs.