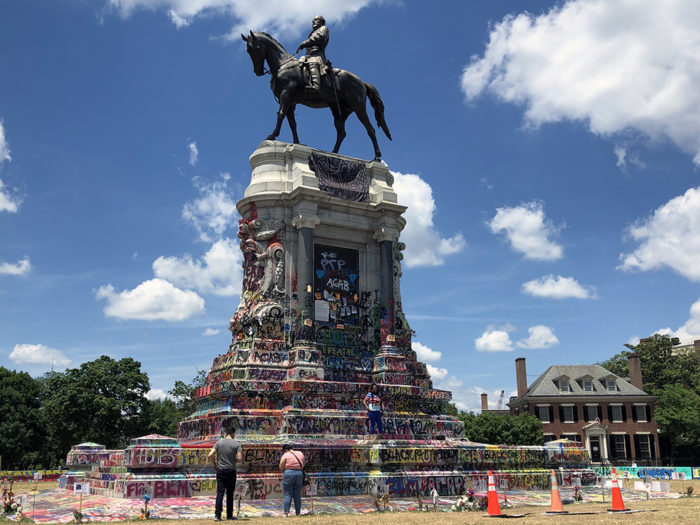 The Robert E. Lee Monument has become a focal point and daily gathering place of the protests in Richmond. (Photos by Michael Schwartz)

There’s a case of the recusals going around among Richmond judges.

A combined six local judges have recused themselves from the two lawsuits filed this month seeking to halt the removal of the Robert E. Lee statue on Monument Avenue.

The hot potato streak started June 8 with Richmond Circuit Court Judge Beverly Snukals. She recused herself as the initial judge on the first of the two cases – a deed dispute filed by William C. Gregory, who claims to be a descendant of the family that sold the land on which the monument sits to the state in the late 1800s.

Next came U.S. District Court Judge Robert Payne, who recused himself from the second of the two cases after it was moved from circuit court to federal court at the request of the attorney general’s office.

That second case, filed by six Monument Avenue residents claiming the governor doesn’t have the right to take the monument down and that their properties’ values would be harmed if it did come down, has since been dismissed from federal court at the behest of the plaintiffs so they could refile it in Richmond Circuit Court. 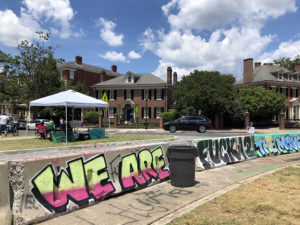 They did just that on June 17, setting into motion a passing of the baton that has since gone through the hands of five judges in one week. The initial judge assigned to the case, Judge Clarence Jenkins, recused himself. It then was assigned to Judge Phillip Hairston, who also pulled the recusal card. The trend continued with Judge Snukals and Chief Judge Joi Taylor each taking themselves off the case – and finally to Judge W. Reilly Marchant, who as of Monday afternoon still held the case.

None of the judges explained their reasons for recusal. They are not required to do so in Virginia.

The first of the two cases – the Gregory deed dispute – also has since been reassigned to Judge Bradley Cavedo, who in presiding over it since June 11 has proven to be the only one of his city peers to oversee one of the two monument matters at length.

Cavedo’s subsequent rulings have caused the Gregory case to become the more notable of the two, namely due to his imposing an indefinite injunction preventing the Lee Monument from being removed while the case plays out.

“My view is that the monument is the property of the people of the commonwealth and the governor is more of a custodian or fiduciary on their behalf,” Cavedo said upon ordering the injunction at the June 18 hearing, according to Courthouse News Service.

Cavedo also happens to live in the neighborhood.

According to city property records, Cavedo resides just off Monument Avenue, a block over from the street’s main drag and near the now-graffiti-covered J.E.B Stuart monument and Lee statue, the latter of which has become Richmond’s unofficial epicenter of the protests sparked by the death of George Floyd in Minneapolis. 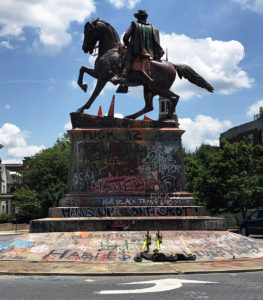 The J.E.B Stuart Monument sits just up the road from the Lee statue.

While the proximity of Cavedo’s residence to the Lee statue might cause some to raise an eyebrow, it doesn’t necessarily mean it crosses a line that could potentially make him unable to impartially sit in on the case, according to judicial ethics experts interviewed by BizSense in recent weeks.

“That would be potentially hard to argue,” Charles Gardner Geyh, a law professor at Indiana University specializing in judicial conduct, said of Cavedo’s situation. “Whether you do or don’t tear this statue down, he’s in the middle of a situation here. And it’s not clear to me that because he lives in the area that his impartiality might be questioned one way or the other.”

Judges in Virginia are governed by the Canons of Judicial Ethics. Any alleged violations of the canons are heard by the Judicial Inquiry and Review Commission, a panel on which Cavedo sat in years past.

Section III of the canons state: “A judge must avoid all impropriety and appearance of impropriety.”

“The test for appearance of impropriety is whether the conduct would create in reasonable minds a perception that the judge’s ability to carry out judicial responsibilities with integrity and impartiality is impaired,” the canons continue.

Kevin Martingayle, a Virginia Beach attorney who grew up in Richmond and represents judges in ethics cases before JIRC, agreed with Geyh.

“It is not clear that living near Monument Avenue would create such a conflict or appearance of impropriety that he would be required to recuse himself. That’s something (a judge) has to decide for himself,” Martingayle said.

Indeed, when it comes to recusals, the onus falls on the individual judges. A party to a lawsuit can raise an issue about a judge’s impartiality, but only judges can decide to recuse themselves.

“The default is in favor of the presiding judge,” Geyh said.

A message left for Cavedo at the courthouse was not returned. Judges are prohibited from commenting to the press on pending cases. 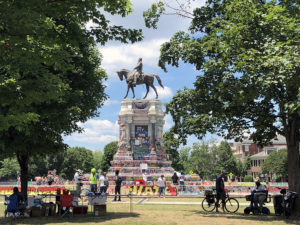 Vendors and others gather daily near the monuments.

Richard Flamm, an attorney in Berkeley, California, who has focused on judicial ethics, particularly judicial disqualification, said recusals aren’t rare, but that the number of recusals on the Lee Monument case did get his attention.

“It’s not at all uncommon for judges to recuse themselves in any case in which they are biased or think a reasonable person might question their ability. But when six judges do it, it is somewhat unusual,” he said.

Flamm’s theory for the recusal streak here goes back to the hot-button nature of the cases.

“No one wants to touch it, that’s the logical answer,” he said. “It takes some guts to stay on the case.”

Judges are assigned cases in rotation determined by a chief judge, a position that also rotates. In the case of Richmond Circuit Court, the current chief judge is Judge Joi Taylor, who was one of those to recuse herself from the second Lee Monument case.

The reasons that could lead to a recusal are most often related to a judge’s personal connections or perceived connections to parties, attorneys or witnesses in a case, or having a financial interest tied to a party or the potential outcome of a case.

Martingayle said recusals in Virginia also are not uncommon, and multiple recusals on the same case aren’t unheard of. He referenced instances in Hampton Roads when all the judges in a given municipality recused themselves from cases filed against police officers in their jurisdiction. 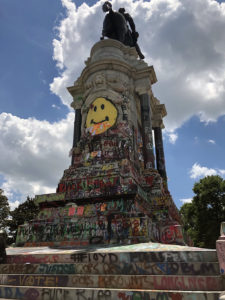 The Lee Monument is covered nearly head to toe in paint of all colors, except for the statue itself.

If all the judges in a circuit pass on a case, it could be circulated around to nearby jurisdictions, with the state Supreme Court stepping in to appoint someone.

Martingayle said a topic as touchy as the monuments might ultimately require some help from the outside.

“It might be that these extremely controversial battles about monuments might be best handled by a judge from outside the jurisdiction,” he said.

Cavedo, who was appointed to the bench by Gov. Mark Warner in 2002, has been known to recuse himself and did so in at least one high-profile case. In 2013, according to news reports, he stepped away from presiding over the recount of the attorney general’s election, due to his personal relationship with the family of candidate Mark Obenshain.

Marla Greenstein, executive director of the Alaska Commission of Judicial Conduct, said questions of financial interest are often the cause of judge recusals. However, she said the fact that Cavedo lives in the neighborhood doesn’t jump out as a cut-and-dry instance of such a conflict.

“Usually judges are assumed to be able to set aside those things,” Greenstein said. “What if there was a car accident on that block, would the judge, because say, he walks on that street every day, need to be disqualified? I think it would be a real stretch that there was any financial interest (for Cavedo).”

Geyh, from Indiana University, and others agree with Greenstein, in part because Cavedo is overseeing the Gregory deed dispute and not the second case dealing with the monument’s potential effects on property values.

“The fact that (Cavedo) is in the neighborhood would be a problem only if there really is going to be a demonstrable effect on property value,” Geyh said. “If you can show that a decision on one side or the other will demonstrably affect the judge’s property value, then I think his interest may be affected.”

Absolutely ridiculous that judges can “recuse” themselves without any explanation. As far as I’m concerned, Jenkins, Hairston, Snukals, and Taylor haven’t “recused” themselves — they’ve abdicated their judicial responsibility to rise above the political circus and seek impartial justice. “Hot potato” has no place in the judicial system.

I’m sure there are plenty of other situations where that comes in handy.

I’d rather a judge recuse themselves rather than putting them in potential situations where they are forced to choose between exposing sensitive personal information about themselves or not recusing themselves.

Imagine, for example, having to choose between exposing that you had an affair with someone in a case in order to recuse yourself.

Richmond is, in many ways, still a very small town. I’d rather have a fair impartial judge look at something instead of some one who felt they could not render judgement.

Let’s get someone in from the beach or from NOVA and move forward on this and get it resolved.