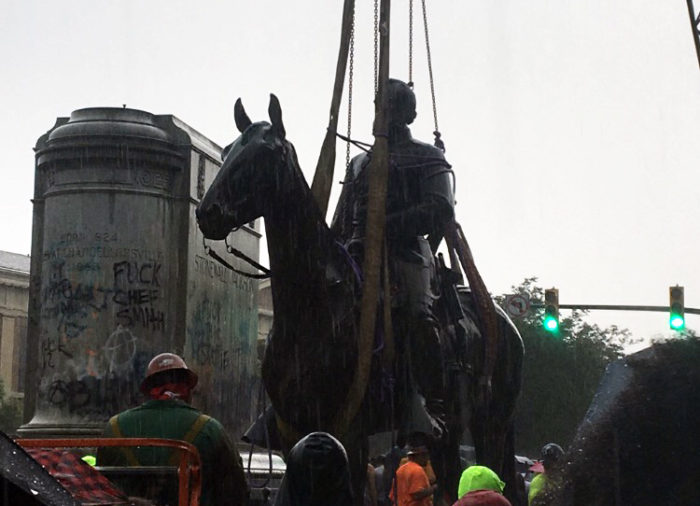 A rain-soaked crowd watched Wednesday as the Stonewall Jackson statue on Monument Avenue was removed from its perch for the first time since its unveiling in 1919. (Submitted photo)

An estimated seven-figure price tag goes hand in hand with the removal of Richmond’s larger Confederate monuments. And a local nonprofit has stepped in to try to cover the costs.

The Maggie Walker Community Land Trust is acting as the transfer agent for The Fund to Move the Monuments. The newly formed initiative aims to gather enough private donations to cover the costs that will be incurred by Richmond to remove city-owned Confederate statues.

“There are a lot of people who want to see the monuments come down. So if that’s your desire, your conviction, that requires money,” said Laura Lafayette, board chairwoman of the nonprofit.

The fund launched Tuesday, the day before Mayor Levar Stoney ordered the removal of city-owned Confederate statues Wednesday. A crane soon after hoisted the statue of Confederate Gen. Thomas “Stonewall” Jackson off its perch on Monument Avenue that afternoon. The statue had been in place since 1919.

At a city council meeting Wednesday, Stoney said it would cost the city about $1.8 million to remove the statues, and funds would come out of the Public Works budget. Stoney said Richmond would be reimbursed by “the private philanthropic effort going on to raise dollars to cover the costs to the city,” referring to the fund.

Lafayette said she had been in contact with city officials about the plan to cover monument removal costs. Generally, the plan is for the funds to be remitted to the city, though the finer details of the process, such as timelines and whether the money would be transferred in a lump sum or in increments, hasn’t been determined.

“When we have the funds in hand, we will gladly relinquish the funds,” Lafayette said. “This has come together pretty quickly. We will figure out those details.”

As of Wednesday evening, 35 donors had contributed a little more than $2,000 to the effort, Lafayette said.

The funds will be provided to the city with the “explicit stipulation they be spent only on direct expenses related to removal of the City-owned Civil War monuments with any excess reallocated to Richmond Public Schools,” according to the fund’s webpage.

Stoney said Wednesday the statues needed to be moved because they represent an “immediate and growing threat to public safety,” and to “expedite the healing process for the city,” which has seen about a month of protests against police brutality spurred by the death of George Floyd at the hands of police in Minneapolis May 25. Confederate monuments have since become epicenters of the demonstrations in Richmond. 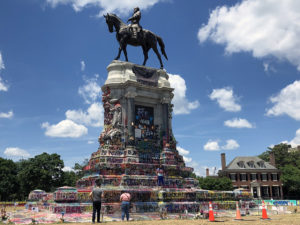 The Robert E. Lee Monument has become a focal point and daily gathering place of the protests in Richmond. (BizSense file photo by Michael Schwartz)

“As the COVID-19 pandemic continues to surge, and protestors attempt to take down Confederate statues themselves, or confront others who are doing so, the risk grows for serious illness, injury, or death,” Stoney said in a statement. “We have an urgent need to protect the public.”

Several statues tied to the Confederacy have been felled by protesters in Richmond in recent weeks. In Portsmouth, a man was injured when people damaged a Confederate monument last month.

Stoney cited emergency powers as well as a new state law that allows localities to remove Confederate monuments within their jurisdictions. Localities are allowed to enter a 60-day period to collect public input and figure out statues’ fate. The law went into effect July 1. In a recorded message Wednesday, the mayor said removals would occur “over the next several days.”

“The statues will be moved to an undisclosed and secure location,” city spokesman Jim Nolan said in an email, adding that Stoney plans “to remove all confederate monuments in the city as soon as we can do so safely.”

The fund initiative is the brainchild of Shannon Harton, a local real estate agent, who hit on the idea in 2017 after a white supremacist rally in Charlottesville. Lafayette said the effort is a good fit for the Maggie Walker Community Land Trust, which works to help low- and moderate-income households achieve and maintain affordable homeownership.

“The removal of the statues aligns with our mission statement, which is to create a more equitable and just community,” she said.

The nonprofit’s initiative comes amid a legal battle over removal of the Robert E. Lee statue on Monument Avenue, which is the only statue along Monument Avenue that’s owned by the state.

Frankly, the City may as well recoup the costs and the best way is to put the statues up for auction. There are individuals who will pay millions for them, especially for Lee and maybe Jackson. Let them pay to erect them on their own property. This needn’t be a burden on the taxpayers.

Bruce, I wish I had the space & money to do just that!

Bruce, why would the city put them up for auction if the goal is to allow for healing and to stop celebrating traitors to the USA? These statues will show up somewhere else if they are auctioned. We need to melt them down.

Two interesting points in this story: “There are a lot of people who want to see the monuments come down”. And “these have stood for more than 100 years”. There may be equal to, or more “people who DON”T want the art to come down”. Yet One half-wit politician says our history and our culture is to be removed without due process, public debate or vote. These were erected because people felt a strong need to celebrate something. Now more than 100 years later they are suddenly toxic and have to be removed immediately. Everyone should remember that all politicians… Read more »

https://qz.com/378533/for-the-last-time-the-american-civil-war-was-not-about-states-rights/ The people of the Commonwealth of Virginia elected Northam, and the people in Richmond elected Stoney, and i challenge you to name any sane person who thought either one of them was in FAVOR of keeping the monuments up.That is the expression of the will of the people. Prior to Northam’s election, in June 2017 Northam stated that the statues in the state Capitol that the General Assembly has jurisdiction over “should be taken down and moved into museums“, and that the decision on other statues “belongs to local communities.”[26] He has said that there should be more public memorials… Read more »

Glad to provide this link if you want to participate: http://www.movethemonuments.org. Since this story was written, we’re well past $4000 but, yes, there’s still a long way to go. If you’re led to join us in any amount, please do–every dollar raised a dollar that isn’t moved from another line in a already-strained City budget!

Thanks for this. Odd the story was published without the contact info.

I hasten to add that this private fundraising effort isn’t focused on WHETHER or WHERE the monuments should be moved (both are larger, longer, more fraught conversations that have been ongoing for years) but rather how the project, already underway, will be paid for and at what expense to other valuable City priorities. This citizen, at least, doesn’t want it to come from education, roads, housing, safety, etc. Thanks for joining us!

Shannon – that is EXACTLY my concern, but got de-friended in Facebook for expressing it. Clearly we have lost the ability to consider or even tolerate differences of opinion even as it relates to fiscal concern and responsibility. The roads and infrastructure in this city are in serious decline and if the DPW budget has 1.8 million to throw around without consequence, then we as taxpayers have a very serious problem that needs to be addressed promptly! This is only made more serious when you consider the state of city school buildings and the educational outcomes for city educated youth!!… Read more »

Just another example of Stoney’s reckless and irresponsible behavior. He is a complete and total disaster for the City of Richmond.

It’s ridiculous that people are using this event to raise money. Makes one wonder what the real intentions of any of this is? Are they going to start pulling down historic homes next? Use the money for affordable housing not political vanity projects – Stoney sent out contribution emails as the monuments were going down. It’s a solemn day for Richmond no matter what side of the debate you’re on.

Interesting that the purpose of this non profit is to raise funding for affordable housing. Two million dollars would go a long way in supporting that mission! Too bad it is being misdirected toward this egregious effort to erase history.

How do you erase The Civil War? Removing the statues doesn’t erase anything, but it does rid Richmond of our ugly participation trophies. Do you have a idea how many people across the country who have always looked down upon Richmond for our infatuation with The Confederacy? Our love for these statues has lost of tons of business over the last several decades and it’s one reason why cities like Charlotte have surpassed us.

I would like to see your source on what America thinks of Richmond and the stats on how much business we’ve lost due to the statues. I’m not convinced that Richmond is anywhere close to becoming a dream destination for business without the statues either. The mob destruction that the city leadership has condoned, the ugly graffiti and boarded up businesses, disintegrating roads and infrastructure aren’t exactly going to draw any business to this poorly run city.

i agree, monument avenue was a tourist attraction,i think people enjoyed looking at then and taking pictures not to mention the people who have long lived there. Richmond has been home to many new businesses and i cant think of any business who would even consider not locating here due to the statues. But i remain steadfast in my belief that taking them down accomplishes nothing but urban blight.

Shannon – that is EXACTLY my concern, but got de-friended in Facebook for expressing it. Clearly we have lost the ability to consider or even tolerate differences of opinion even as it relates to fiscal concern and responsibility. The roads and infrastructure in this city are in serious decline and if the DPW budget has 1.8 million to throw around without consequence, then we as taxpayers have a very serious problem that needs to be addressed promptly! This is only made more serious when you consider the state of city school buildings and the educational outcomes for city educated youth!!… Read more »

Will any of this money be used to replace all the gratified signs and cobblestones in the neighborhood? Also, a fair number of light posts got smashed during the first few rioting nights.