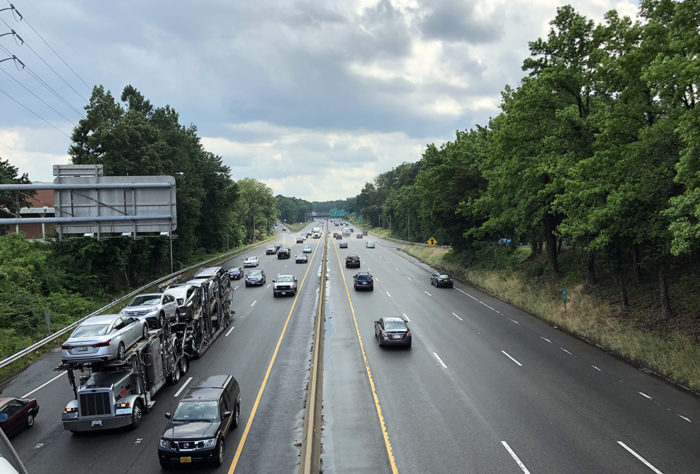 Traffic on I-95 was lighter than usual. (Michael Schwartz)

The Richmond rush hour continues to be less of a rush than usual.

In the wake of the first wave of coronavirus and as the local economy continues to reopen, interstate vehicle volume for the morning’s rush-hour peak is down about 27 percent from the same period last year, according to traffic and emissions data from the state.

The composition of vehicles on the road from 7 to 9 a.m. on weekdays has changed from 2019, as car volumes have fallen 34 percent, while truck volume is down 1 percent. 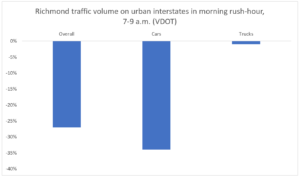 Overall, passenger vehicle traffic on urban interstates in the region has fallen around 25 percent on interstates from 2019, and truck volume is even with last year.

Traffic volume on I-95 fell 18.2 percent year-over-year on average from Jan. 1 to June 23, according to VDOT, which pulled data recorded from seven counting stations in Chesterfield, Hanover, Henrico and Richmond. Total cars in that time frame fell to 53.6 million from 65.5 million in the same period of 2019. 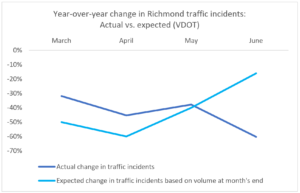 High-speed crashes appeared to occur at a disproportionately high rate in April compared to the year before, according to traffic incident data from the Virginia Department of Motor Vehicles. 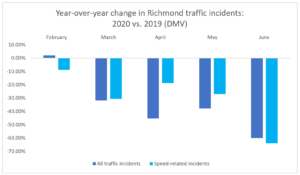 Richmond’s air quality improved significantly as more cars sat in driveways, according to the Virginia Department of Environmental Quality.

Fine particulate matter, or particle pollution, fell 16 percent in March through late June 2020 compared to the average from the same period in Richmond from 2017 through 2019. Maximum levels of nitrogen dioxide, a pollutant released from the burning of fuel, were 15 percent lower from March 14 to June 26 compared to maximum levels in the last three years during the same period.

“What we’ve seen recently is that as traffic has decreased in the Richmond area, so has pollution,” said Irina Calos, VDEQ spokeswoman. “This is just accelerating the long-term trend of air quality in the area continuing to get better, and it’s better now than it has been in my whole lifetime.”

Air pollution in Richmond didn’t decrease as much as in larger cities such as Los Angeles or Washington, D.C., because Richmond’s air quality was much cleaner to start with, Calos said. The city had no poor air quality days in 2019, according to the VDEQ, compared to 73 in 1993.