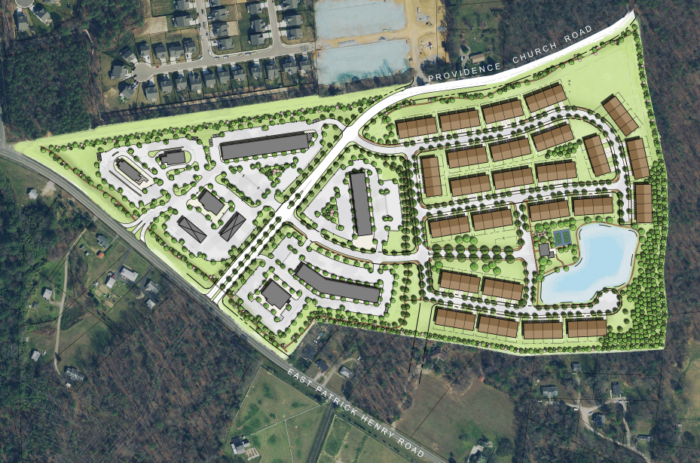 A site plan for Hickory Grove shows commercial uses filling the east side of the site and the townhomes filling the west half. (Submitted)

As it enters the second half of its years-long development of an expansive residential subdivision nearby, a real estate development firm familiar with Hanover County is eyeing a project that would put 100 townhomes at a prominent fork in the road.

Rogers-Chenault Inc., the firm developing the 277-home Hickory Hill subdivision off East Patrick Henry Road, has submitted plans with the county for a multiuse development at the road’s intersection with Providence Church Road, just beyond Ashland town limits east of Interstate 95. 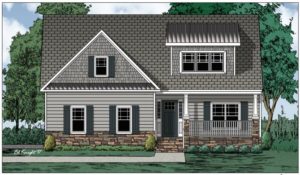 Called Hickory Grove, the project would fill the bulk of a 51-acre tract with 100 age-restricted townhomes for seniors and a mix of commercial uses, including retail, office and restaurant. The remaining 9 acres would be developed with commercial uses that could include a convenience store and fast-food restaurant.

The Hanover County Planning Commission deferred a vote on the proposal at its meeting last month, requesting that Rogers-Chenault address concerns about the project’s potential traffic impacts and architectural designs. The case, which Rogers-Chenault previously had deferred in March, was scheduled to go back before the commission at its July 16 meeting, but Rogers-Chenault requested another deferral to August. 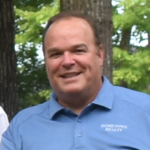 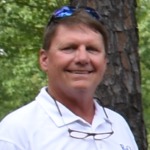 As previously proposed, the commercial uses would straddle a realigned Providence Church Road that would create a perpendicular intersection with Patrick Henry Road. The 55-and-up townhomes would fill the eastern half of the site, and plans call for a traffic signal to be installed at the I-95 ramps once the commercial portion is constructed.

County planning staff said the separation of uses goes against the spirit of the county’s MX zoning district, which Rogers-Chenault is requesting, and which encourages mixing commercial and residential uses in shared spaces.

While planning staff said the project is “not a typical mixed use community,” Rogers said such blending wouldn’t work with their project, which would consist of buildings restricted to two stories in height.

“That’s something that the planning staff likes to see, but it’s not a requirement under the zoning,” Rogers said. “Because of the use that we’re asking for on the residential side, a 55-plus community isn’t like a West Broad Village where you have all of it integrated. That’s not what (55-and-up buyers) are looking for. It’s not as marketable for them.”

County staff also encouraged revisions to the buildings’ designs, showing facades from projects such as Caldwell Park as examples of preferred architecture. That project, planned for years along Chamberlayne Road south of New Ashcake Road, remains in the works and has brought on new developers, including Caldwell Partners LLC, an entity tied to Larry Shaia’s Charter Realty and Development Co.

Hickory Grove also attracted a letter of concern from the neighboring Town of Ashland, which asked that the case be delayed to allow further study of potential impacts to the town from the proposed traffic signal at I-95. Rogers said they are working with Ashland on a traffic impact analysis that they’re hoping will answer the town’s concerns.

Rogers-Chenault and the Town of Ashland have a history. In 2015, the firm sued the town after its review of a project called Green Acres appeared to hit a stalemate. The lawsuits were dismissed later that year, and the site was eventually sold to Markel | Eagle Partners, whose Eagle Construction of VA has picked up the project. 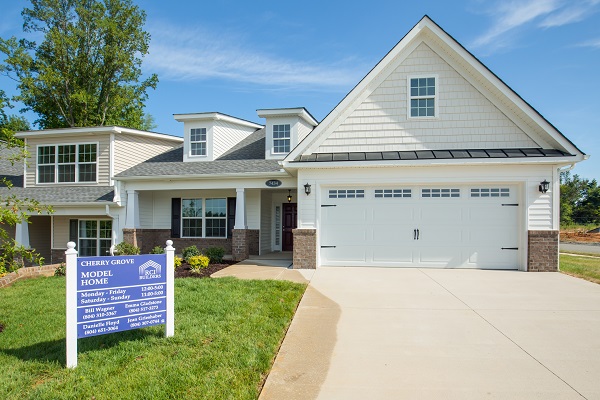 The 51-acre Hickory Grove site is owned by Hickory Hill II LLC, an entity tied to local developer J.B. Campbell Ltd. Rogers said the Campbell family behind the ownership are traditionally commercial developers and enlisted Rogers-Chenault for the project in light of the county’s land-use plan calling for multiuse zoning on the site.

Rogers said the project is designed to provide a transition between Ashland and Hanover’s respective urban and rural settings.

“There is a lot of pent-up demand for the age group that’s mentioned, because of them moving out of their larger homes and going to a maintenance-free environment,” Rogers said, adding that the townhomes would appeal to homeowners looking to downsize and town residents seeking a more rural setting. He said the site backs up to a 750-acre preservation area that’s part of the Hickory Hill holdings.

“It’s a really good transition in my opinion,” Rogers said. “I think that buyer is really going to enjoy having those conveniences and yet have that rural feel literally in their backyard.”

The one-level townhomes would range between 1,500 and 2,200 square feet, with prices averaging between $325,000 and $350,000, Rogers said. They would consist of primarily two- and three-bedroom floor plans, with two-car garages and upstairs areas that could serve as guest bedrooms.

Rogers said they do not have any commercial users lined up yet. Images included in their rezoning application show retail brands such as Chipotle, Panda Express, Starbucks and Wawa. Rogers estimated the total project cost at about $7.5 million.

Meanwhile, Rogers-Chenault continues to guide the development of Hickory Hill, which Rogers said is about 65 percent built out with about 120 more houses left to be built.

Planned for 277 homes on 1-acre lots with a considerable amount of open space, the subdivision has been taking shape since the firm started buying up about 1,700 acres there over a decade ago. The land is adjacent to the namesake Hickory Hill house, a 19th-century plantation home that was listed for sale in May. 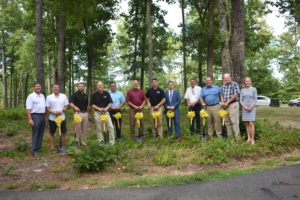 Todd Rogers, left, and Mike Chenault, third from right, joined others for a ceremony kicking off Homearama at Hickory Hill. (HBAR photo)

Hickory Hill is hosting this year’s Homearama, the annual home showcase by the Home Building Association of Richmond that is being held virtually and by appointment this year due to the coronavirus pandemic. Rogers said four of the showcase’s six featured homes have sold and more than 70 private tours have been held so far.

Homes in Hickory Hill start in the $500,000s, with the Homearama homes exceeding $1 million.