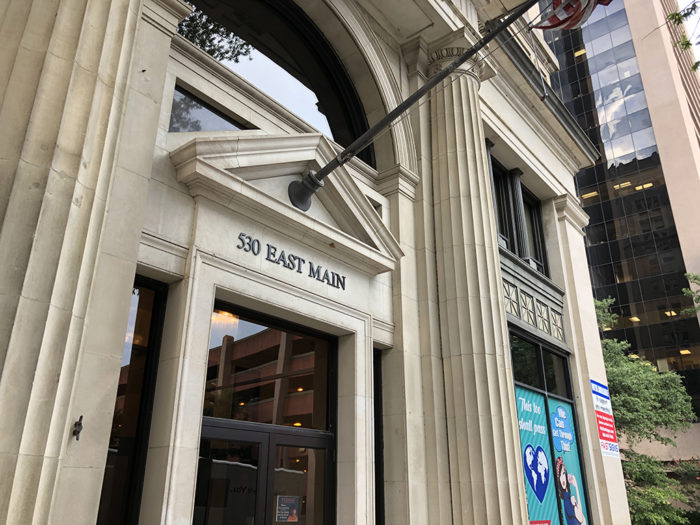 Throop Law was based at 530 E. Main St. (Michael Schwartz)

The death of a local lawyer has left his small downtown firm in the hands of a receiver, tasked with unwinding its affairs, including dozens of ongoing cases.

The firm was established in 2014 and handled mostly consumer Chapter 13 bankruptcy cases.

Obituaries and court records do not list any details of the circumstances of Throop’s death. 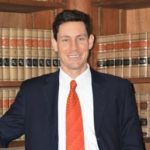 Throop was the sole owner of the five-person firm, and with no apparent succession plan in place, the practice was left with no one to legally handle its day-to-day business upon his passing.

The Virginia State Bar stepped in in June, asking the Richmond Circuit Court to appoint a receiver to take control of the firm. The court agreed, and local attorney Kirk Vogel of Vogel & Cromwell took the case.

Vogel, who was not available for comment, on Tuesday put the firm into Chapter 7 bankruptcy. That will allow him to liquidate the firm in an orderly fashion over time.

Vogel has been tasked with combing through documents, making an inventory of cases and getting a grip on the firm’s finances and eventually winding down its operations. He also must notify clients and represent them until they find a new attorney. 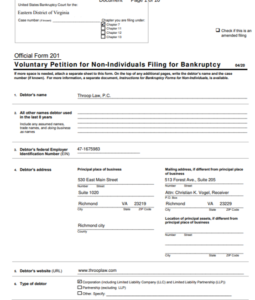 Vogel, according to court records, found that Throop had more than 100 active Chapter 13 bankruptcy cases in which clients owe fees.

Consumers pay a flat fee of $5,434 for bankruptcy, which is typically paid to the attorney in monthly increments over three to five years.

The firm also had a line of credit and accounts receivable financing plan with Fresh Start Funding, which pays 90 percent of clients’ bankruptcy fees up front. Fresh Start then collects the fees from the clients over time, rather than the law firm collecting them.

Throop Law had $154,000 in outstanding accounts receivable with Fresh Start and $81,000 in a general account.

The law firm also obtained two loans from the Paycheck Protection Program totaling $170,000. Half of that was used to pay credit card obligations, according to Vogel’s report to the court.

Throop, according to obituaries in his home state of Washington, was born April 7, 1973. He grew up in Vancouver, Washington.

He moved to Richmond after receiving his law degree from the University of the District of Columbia.

Throop’s mother, who lives in Washington State, was contacted by the VSB, court records show, and did not oppose a receiver being appointed. An email to his mother was not returned by press time.

Cameron Rountree, a VSB spokesperson, said attorneys in Virginia are encouraged but not required to have a formal succession plan in place, unlike some other states.

But he said the VSB has discussed the idea of whether there should be such a rule imposed, in order to prevent situations such as what has resulted from Throop’s death.