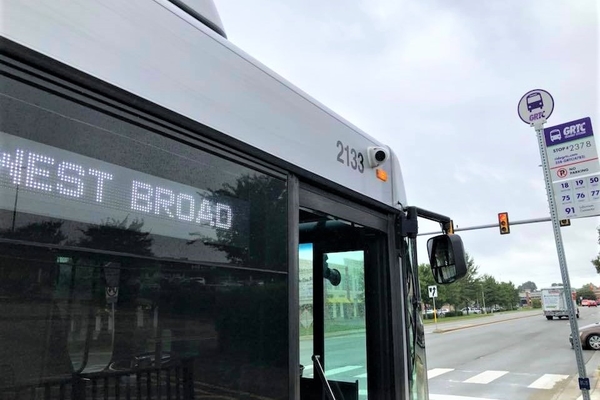 The transit system expects it will need to contend with a $10 million to $12 million gap in its FY22 budget. (Courtesy GRTC)

The economic disruptions of the coronavirus pandemic burned a $26.1 million hole in GRTC’s budget for its current fiscal year.

And while that damage, which was equal to almost half of the regional bus authority operations budget, was repaired with federal funding, GRTC is uncertain how it will make up the expected shortfall of $10 million to $12 million in its fiscal year 2022 budget.

Lower revenue from the freezing of fares, loss of advertising, decreased funding support from localities, and expenses tied to protective gear and sanitation contributed to the gap in GRTC’s current budget.

The authority is weighing several strategies to generate revenue for fiscal year 2022: reinstatement of fares that are currently suspended during the pandemic, bigger asks of localities that contributed money to operations for FY21, reclassification of local routes funding to the regional authority and cuts to bus frequency or routes. GRTC launched a new bus line on Jefferson Davis Highway in March. 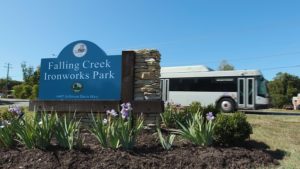 “There is likely to be a funding gap in the FY22 operations budget, and we do not know yet the exact combination of these strategy options that will be required,” GRTC spokeswoman Carrie Rose Pace said in an email. She noted resumption of fee collection and service reductions are considered last resorts.

In June, GRTC adopted a $60.3 million budget for FY21, which began July 1. Apart from its budget, GRTC also socked away $3.6 million for a coronavirus reserve along with another $10 million in its Central Virginia Transportation Authority reserve.

The Central Virginia Transportation Authority is a regional transportation funding authority that doles out money collected through sales and gas taxes.

The pandemic’s disruptions incurred both new expenses and lowered revenue across several streams, GRTC CEO Julie Timm said during a Board of Directors meeting July 21.

GRTC spent $4.3 million for protective gear and cleaning. Fare and pass revenue fell $7.4 million, and advertisers pulled about $700,000 worth of ads. GRTC’s fixed-route ridership totaled 1.6 million from April to June of this year, down from the 2.3 million rides recorded during the same quarter last year. That includes rides on the Pulse line.

Local and state governments also walked back allocations GRTC had factored into its budget planning. Richmond contributed $8 million less than originally planned, Henrico County pulled $5.2 million and the state dialed back its allocation $500,000, as those entities navigated the pandemic.

GRTC received $26.1 million in funding through the federal CARES Act, which thereby erased its budget deficit. It expects to burn that cash during the current fiscal year.

GRTC hasn’t collected fares since March 19, the exception being CARE On-Demand service fares. The move was made to decrease close interactions between riders and GRTC staff. If fare collection resumes, GRTC would beef up newly installed protective equipment and sanitation routines.

GRTC is exploring to what extent subsidies from the CVTA can be used to fund its routes. That entails a review of “local” service routes that GRTC said in practice have a regional ridership and therefore could be eligible for the funds. The success of that effort would have an effect on what GRTC asks of local governments.

“For example, most of GRTC’s local services operate within the City of Richmond, but some of those routes are flagged for regional route consideration and funding by the CVTA. If some of the City-funded routes move off their books, that will inform what is remaining for the City to subsidize,” Pace said.
GRTC received $33.9 million from state and local governments in FY19.

Even the most ardent public transportation advocates have to admit that it’s sad that fares only generate about 14% of all cost associated with operations. Literally a fare that someone pays $2.50 for actually cost $15 to GRTC to operate. That is a very broken model.

Totally agree Roger. GRTC is owned by the City of Richmond (50%) and Chesterfield County (50%). The buses always run with very few riders so I think we should sell it to a private entity and cut our loses. Subsidized Uber drivers would probably be more cost effective.

Jim, I actually did the math a couple of years ago taking into account total passenger miles and total annual budget and it would be cheaper for every rider to take a single Uber ride than taking the bus. I am not sure how that is the best use of public funds. I will admit that GRTC does offer some specialty functions such as handicapped travel that Uber might not be able to provide but why not just narrow the focus down to those functions and leave the mass transportation to the private sector who would operate much more efficiently… Read more »

Wow. Got a new CEO on board who doesn’t feel like folks should pay fares for Pulse because they can’t enforce it after an auditor points the problem out, that any 18 year old could figure out already.

And then budgets $500k to put out bids for another contractor to fix what the first one failed to do.

Then this budget gap.

Richmond. Forever doing what it can to get in it’s own way. Won’t be long before this auditor is fired. Can’t have them going around finding all the stinky problems and the public servants involved in those problems.