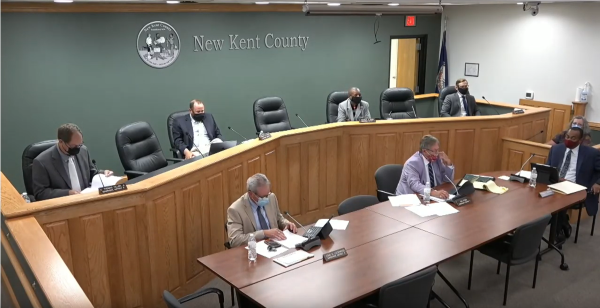 The New Kent Board of Supervisors has allowed the construction of a new commercial development that would feature a grocery store in Bottoms Bridge. (Screenshot)

A new player could enter the New Kent County grocery game as part of a future commercial development planned in Bottoms Bridge.

New Kent supervisors on Monday OK’d a conditional use permit to pave the way for a 150,000-square-foot development expected to include a grocery store and other retail space alongside a mini-storage facility. Dubbed Pocahontas Square, the project would be located on Pocahontas Trail across from the Patriots Landing residential development.

Developer Mark Daniel of Joamark Gloucester said central to the concept is bringing a new major grocer to the New Kent market, which is dominated by Food Lion. The chain has a store just up the street from the development site.

While nothing is definite at this time, Daniel said he has been in talks with several grocery brands.

“I propose to build something in New Kent that would offer some choices to our citizens. I love my grocery store, I like the people I go to. But it’s one player in this marketplace and I’m specifically interested in finding another one,” Daniel said during the board meeting Monday.

New Kent supervisors voted 3-2 to approve the conditional use permit needed for the project.

“I think in 3 to 5 years, he’ll probably be back here asking for that commercial face to be gone,” Supervisor Thomas Evelyn said. “I do think the commercial needs to be done before the mini-storage.”

Daniel said he has modeled the development on Brandy Creek Commons in Mechanicsville, which is anchored by a Publix.

In an interview Wednesday, Daniel said it was too early to peg a number to the development’s cost, but said it would be in the millions of dollars. The plan is to build the storage area by the winter, and he estimated the retail area would be completed in about two years. Daniel’s firm does not yet own the land, but does plan to acquire it.

The development would be constructed near VCU’s recently opened emergency medical center in the county.

As far as a storage unit we DO NOT need that built at bottoms bridge for an eye sore and another question I have is what are y’all gonna do with the food lion building when you close one of them down heck you might as well let Wawa. Build a gas station at bottoms bridge to why your at it I am not against the development at all but what I am reading what you plan on building is ludicrous restaurants would be nice considering there is nothing here other then pizza an fast food. Well thank you for… Read more »

I really hope they build a new sidewalk or bike path that is set back at least 30 feet back along Route 60 here that runs into Richmond and Henrico county.

New Kent has to be careful to avoid their section Route 60 becoming a pedestrian nightmare that is a bit of a eyeshore with unchecked driveway and parking lot access.