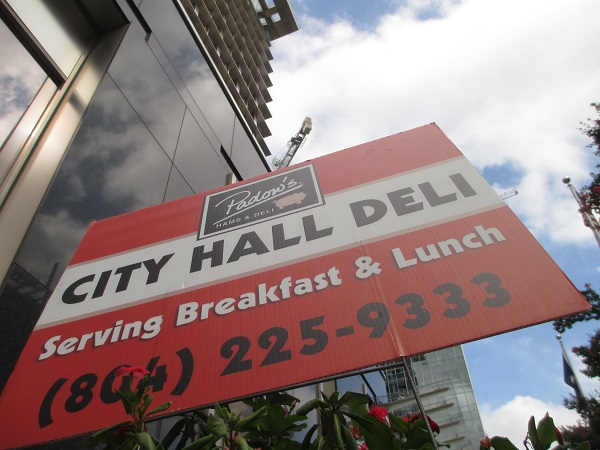 The Padow’s City Hall Deli plans to close next Friday after receiving a notice to vacate from the city in June. (Photos by Jonathan Spiers)

Note: This story has been updated with information from the city received after publication.

Padow’s Hams & Deli is leaving City Hall after more than two decades — and not by choice.

The store is closing Aug. 28 after receiving a letter from city administrators telling it to vacate.

The June 24 letter, obtained by BizSense, tells deli owner Ae Sook “Sue” Park and Padow’s co-owner Sidney Padow that the city “now wishes to terminate this tenancy,” which had been a month-to-month arrangement since Park’s initial five-year contract expired in 2009.

The letter states the city never renewed that lease, and that the deli has continued as a “holdover tenant.” It goes on to order the premises to be vacated and all personal items and restaurant trade fixtures be removed no later than Sept. 23. 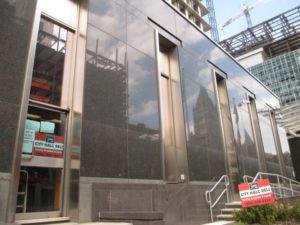 The deli’s Broad Street entrance, accessible from a walkway beside City Hall.

The letter does not give any reason for the termination. It is signed by Lenora Reid, acting chief administrative officer, and copied to Sharon Ebert, deputy CAO for economic development and planning; Leonard Sledge, economic development director; and Neil Gibson, assistant city attorney.

Administration spokesman Wes Jones said the space will be used as a clinic and potentially an RVA Financial employee credit union branch relocated from an upper floor. He said the move is part of a continuing plan to change access to and tighten security on working floors.

City Hall has clamped down on security in recent weeks, with visitors required to pass through a metal detector via the Ninth Street entrance and sign in upon entry. The measures were taken in response to a mass shooting last year inside a municipal center in Virginia Beach.

The ground-floor deli space, Room 117 in City Hall (referred to in the letter as Room 115), is accessible via an exterior door when the deli is open, as well as from the lobby, though the door there was closed off in recent days. A sign in front of the door placed by City Hall security said the entrance was permanently closed and directed patrons to access the deli via the exterior door. City Hall’s Broad Street entrance also has been closed off. 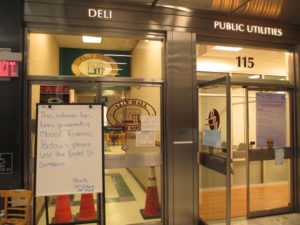 The deli’s lobby entrance recently was closed off. A sign directs patrons to its Broad Street entrance.

Park, who has owned and operated the deli as a franchisee since 2004, said she heard from city employees that a bank or health center may take over the space, which she reopened in early July after closing the deli in accordance with coronavirus restrictions.

“At first, last December, they say, ‘Oh, they want to use something else for our space, because of security reasons.’ Now they say a bank’s coming and a health center should be coming in our spot,” Park said. “People need food every day, twice, three times. Are you going (to the) bank every day? Everybody does online banking. And health center? MCV is right next door.”

Padow, who opened the location in 1998, said the loss of the deli would leave workers in and around City Hall without any brick-and-mortar food options within a two-block radius.

There’s no cafeteria at City Hall. Jones said there is a break area and kitchen appliances on each floor that are available to city employees.

Padow also said it’s not the first time city administrators have tried to force out the deli, which has provided catering for city events in addition to weekday breakfast and lunch service.

“They begged us to come in back in 1998. This is the third attempt to get rid of us, and it looks like they might succeed this time,” Padow said. Padow brought on Park to take over in 2004 due to urging from a city administrator at the time who he said wanted a minority owner-operator.

“She’s been there ever since and doing a great job,” Padow said of Park, who is South Korean. 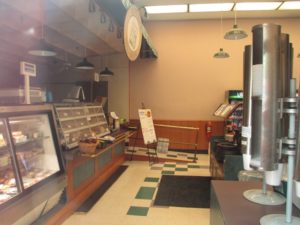 Park’s franchise includes another Padow’s location, in the Colony Crossing shopping center near Brandermill. Padow’s has four other area locations, three of which also are franchised, including a second downtown restaurant at 1009 E. Main St., which Padow said has been closed in recent months due to fewer customers working downtown.

The brand’s Innsbrook location is the only corporately-owned store for the 84-year-old business, which Padow co-owns with brother Ezra “Eddie” Padow. A previous location at Willow Lawn was closed in 2013.

Park said she’ll continue operating the Charter Colony location to support herself and her husband, Jong Gil Park, who co-owns their Sue Kitchen Inc. franchise. Park said her husband has been confined to a wheelchair since suffering a spinal cord injury years ago.

Park said the City Hall deli closure will result in job losses for her employees there, who typically total six or seven but have been down to three or four since the pandemic. She said none of the employees want to commute to the Chesterfield location.

Before the pandemic, Park said, she saw workers measuring and photographing the City Hall space, but she was never told why. She said she was told she needed to update her counterspace, and Padow said she has wanted to remodel the space but could not without an extension of the lease.

“It’s supposed to be the government helping back the business,” Park said, adding that she was in tears the previous day.

“We are trying to serve city employees and people who work in the City Hall, we have a lot of customers from MCV, and it just feels like they want us to close down. No other excuse.” 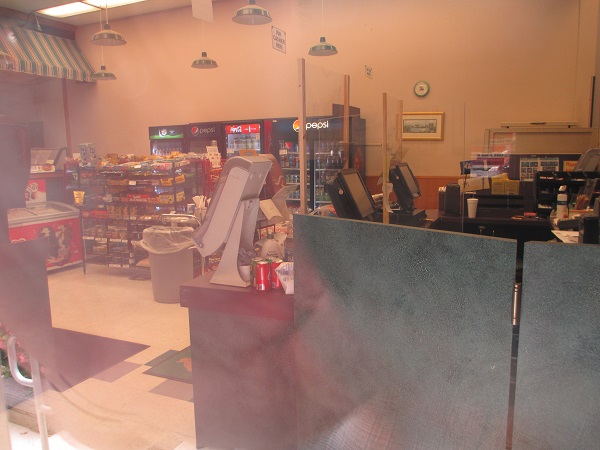 Very sad – No sense at all – Not a good timing This extremely arrogant measure/order placed by the City Hall does not take many other real/critical issues into account (especially during this difficult time with COVID-19). I’ve been regular to this deli place for years, and everyone should know that this “little/tiny” deli space in the City Hall will NOT help them achieve anything great for their security concerns or whatever reasons behind this order but will ONLY harm its local community. City Hall – Please direct your precious resources towards something that could really benefit the City of… Read more »

This is very sad and disappointing. When ever I’m at city hall taking care of business can always stop by for lunch. Even if you just want a snack. They have plenty to pick from. It’s just not right to make someone leave unless there’s a propable cause. After many years of service.

It’s a middle of COVID-19 pandemic. Asking someone to move out during pandemic is awful specially without any reason. BAD TIMING

On the bright side, they should be able to find a place close to the current location very easily

I worked in City Hall for more than a decade and Sue and the other Ladies of Padow’s always took care of me – telling me when the cookies were fresh and warm and making me breakfast most days. Having food readily available in the building is a huge benefit to employees and is great for morale. It keeps folks in the building and productive. I now work out in Chesterfield and miss having this service close by. The city administration will be directly responsible for these folks loosing their jobs and the degrading of employee morale. This is not… Read more »