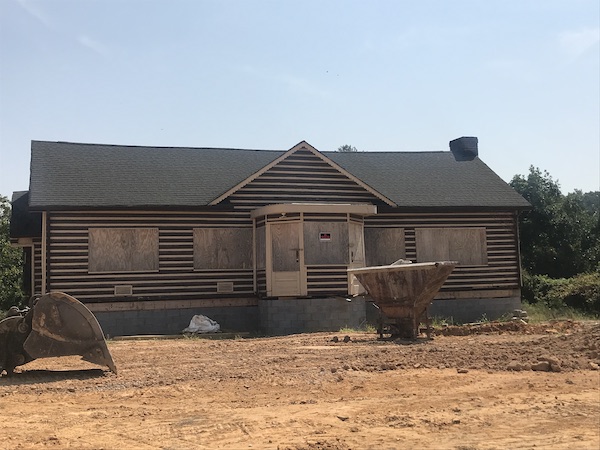 The Wigwam was once a popular dance hall about a century ago. (Photos by Mike Platania)

A commercial development recently got underway in Hanover County, but not before relocating its namesake century-old building a few hundred feet.

The project included moving the original Wigwam log cabin, a former motel and night club that dated back to the 1920s. 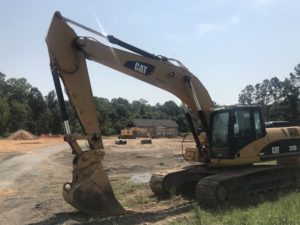 The log cabin was relocated to the south end of the property.

The construction of Interstate 95 in the late 1950s led to the economic decline of highways such as U.S. Route 1, where the Wigwam cabin sits. The Wigwam club closed in the 1960s and about a decade later the Motley family purchased it.

“My parents bought it in the early ’70s. They cashed all our savings bonds and did whatever it took to buy it,” said President Mark Motley. “Just after (Interstate) 95 was built, Route 1 became a ghost town. It’s certainly come back quite a bit. But we used to play football out on Washington Highway because there was no traffic.”

“There’s a national restaurant chain that we’re talking to but nothing’s signed yet,” Motley said of the first phase. Phillip Baxter, an agent with Motley’s brokerage arm SVN/Motleys, is handling leasing. Century Construction is the project’s general contractor.

Wigwam Crossing’s total cost is expected to be $3 million, Motley said, adding that they hope to have it completed in mid-2021.

As for the old Wigwam building, Motley is restoring it to how it looked about a century ago. He plans to add a 4,000-square-foot event space with a kitchen and two bars, which he said would be ideal for weddings or corporate events.

“It is a cool feeling. It’s been in the family for a long time. It’s something that’s honestly been neglected in a lot of ways,” Motley said. “We’re excited we’re putting the resources toward turning it into a first-class event space.”