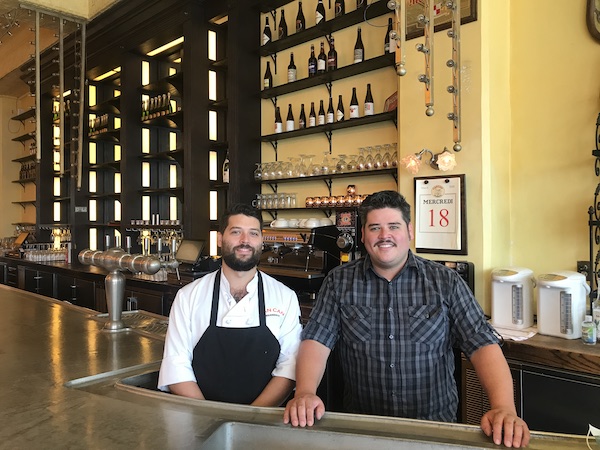 John and Paul Kincaid IV, the new owners of the Can Can Brasserie. (Mike Platania photo)

When Chris Ripp’s father, Dick Ripp, passed away last year at 89, he suspected he might also have to say goodbye to a touchstone of Carytown dining: Can Can Brasserie.

The Ripp family’s company, The Restaurant Co., had owned the Parisian-styled eatery since its opening in 2005, as an outlier from the rest of the firm’s portfolio of 17 Arby’s franchises throughout the region.

Chris knew his dad’s passing would mean he’d be needed at the parent company. And he knew that would mean getting pulled away from running the day-to-day operations at Can Can, a restaurant he says requires a hands-on owner.

“What drove the final decision was my father’s passing, which then left me the responsibility of not just Can Can but joining my brothers in running the whole company,” Ripp said. “I think that’s a huge part of the success of Can Can is having an owner-operator there every day.”

So, while he couldn’t keep it in the family, Ripp found a way to make sure Can Can remained a family business with attentive owners by selling it this summer to brothers John and Paul Kincaid IV, who respectively have worked as the restaurant’s chef and general manager for about five years.

Ripp said he started weighing his options and decided the Kincaids, after playing a big role in Can Can the last half-decade, deserved the first right of refusal.

“I thought this was an opportunity to do not just a good thing but the right thing, and give them a sort of pat on the back that you always hope to get from a boss,” Ripp said. “Plus… (Can Can) needs young, fresh blood and also a young, new perspective. I think we had a wonderful run but I always think sometimes it’s good to have a new set of eyes and energy.”

“They wanted to give us the first crack at making this decision. They really did give us an incredible opportunity,” Paul said. 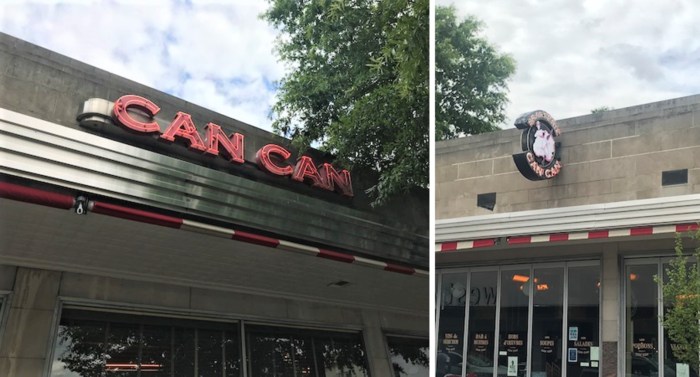 The Carytown staple was sold to two brothers, its former chef and general manager. (Photos by Mike Platania)

That opportunity included a dry-run as owners in January and February, prior to the pandemic. They found themselves at the helm of an operation with a separate bakery, underground prep kitchen, pastry kitchen and upstairs production kitchen, all manned by a staff of 115.

“The scope of this restaurant is huge. It’s just a large, constantly churning operation, and it’s unlike what most people see in their time in this industry,” Paul said.

“Ripp wanted to make sure if we wanted to accept this life,” he added, laughing.

Things were going well through the winter, and the deal was set to close in mid-March right as the pandemic came ashore in Virginia.

Around town, deals that would’ve put other restaurants under new ownership, including Citizen, fell apart due to the pandemic. The Can Can deal nearly met the same fate.

“The yo-yo of elation and feeling we were achieving our life goals and really getting a crack at doing this, versus the despair of having it be one of the worst times for restaurants — that was huge,” Paul said. “We wrestled with it. We thought we’d have to walk away at one point.”

But the Kincaids hung in there and closed on their purchase of the business in mid-May, signing a new 10-year lease.

“We’re feeling a lot better now than we did a couple months ago,” Paul said. “We’re determined and we’re going to be in the building every day just trying to make it happen.”

Paul said the plan is to keep Can Can about 90 percent the same as it has been. He added they’re looking to re-open Can Can’s indoor dining room in the coming weeks.

As the Kincaids try to return Can Can to normalcy, Paul said he wouldn’t mind seeing some COVID-related changes made in the neighborhood, namely closing parts of Cary Street to vehicle traffic to make it more of a pedestrian area.

“If (Richmond) went off a European model where certain areas of the city were closed to street traffic like Carytown from Crenshaw (Avenue) to (Arthur Ashe) Boulevard, most restaurants on the block could recover all of their inside seating,” Kincaid said.

“Culturally, I think it’d be a really cool thing and a way to make a positive out of a negative situation. If we could put our tables in the street and rope off sections from traffic, it’d be much safer.”

Ripp, meanwhile, said he feels confident the Kincaids will give Can Can the attention he knows it needs.

“That’s always been my gripe with a lot of restaurants. People love creating restaurants, they just don’t like working in their restaurants,” he said. “(Paul and John) are going to be in there every day.”

And Ripp said he may drop in from time to time.

“Oh, I can’t wait to go back,” Ripp said, laughing. “I can finally relax in there rather than get up and feel like I need to address something.”

Kudos to Mr. Ripp for giving the Kincaids a chance at ownership––classy and well-deserved. Looking forward to dining at Can-Can again soon.

I wish we could get more of Richmond roped off from cars and used for outdoor seating, it would be a great boon to resturants

a great idea, even if we just start with some of the parking lanes

Absolutely rooting for the success of CanCan. One of the best places in Richmond eat or drink. Unmatched cocktail menu that the restaurant changes seasonally.

I am rooting for the new owners, but closing off Cary street to cars would be a disaster.

It could go single lane though

I can’t really see what your disaster would be. With some analysis and creativity there could be a lot of pedestrianized space down there. Keeping cross streets open could help (Staunton currently does this) and bringing the dining outside could be nothing but good.

How? Look at the zoning changes in Scott’s Addition and the Pulse Corridor. They could put a pulse stop on Boulevard, Run Pulse up Ellwood and put a second stop there(near the new publix) , and close of the area in between to cars on Cary. Or leave one lane for Pulse bus traffic only and have 3 or 4 pulse stops.

We ordered one of their family meals earlier this month (beef bourguignon) and the food is as good as its ever been. I’m sure the timing has been tough on the new owners, but the food is still great and I hope they have a continued success…

Thanks to Chris Ripp for running a wonderful restaurant for many years. Congrats to John and Paul Kincaid, the new owners, and best wishes for much success with such a great restaurant!!

This place is iconic. It must succeed. It is an interesting idea to close Cary St to pedestrian traffic – Charlottesville’s downtown mall has done this quite well.

Close off Carytown like the Downtown Mall in Charlottesville. Plant trees in the middle. Pave it with bricks. Set up tables.. It would make Richmond a national destination.

While living in DC and visiting RVA my wife and I became raving CanCan fans. Since moving to RVA in ’17, the lovefest continued and now we’re thrilled with the Kinkaid’s stewardship, plus there great ideas for an even better Carytown experience as a unique destination! Hope City leaders are listening… Go John and Paul!

There is no place in Richmond that I would rather be than Can Can! We have loved Chris’ hospitality and the consistency of good food and warmth of people like Andrew and Laurel. A class act. Thank you Chris for assuring it’s future success and yes how great it will be for you to enjoy it like the rest of us!