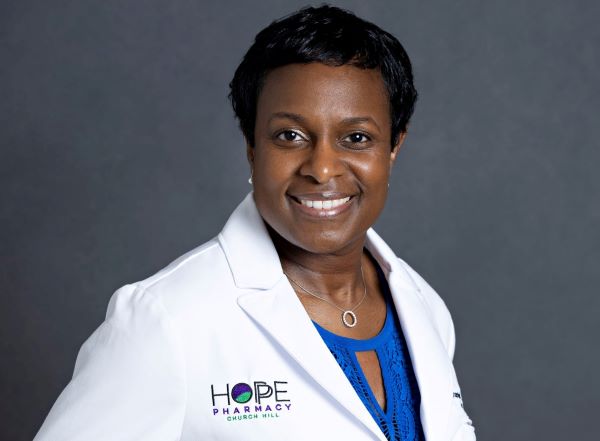 An irony of the coronavirus pandemic is that although it’s an ongoing public health crisis, it hasn’t necessarily been a boost for everyone in the health care industry.

Hope Pharmacy in Church Hill is a prime example.

As one might expect, prescriptions are a big part of the pharmacy business. When people began to avoid doctor’s offices to steer clear of COVID-19 and elective surgeries temporarily ceased earlier this year, orders for prescriptions dried up as doctors stopped writing them.

“When you think of pharmacies you think of them as essential, and they are, but when patients stop going to the doctor like they should, that slows down our prescription count,” said Hope Pharmacy owner Shantelle Brown.

So when those doctor-to-pharmacy orders stopped, Hope switched to a business-to-consumer model, kicking off a door-to-door marketing campaign and pivoted to selling pet medication. 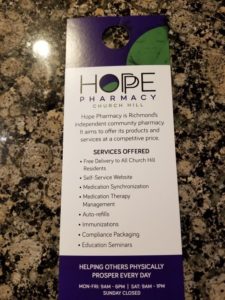 Hope Pharmacy launched a door-to-door marketing campaign to pick up new business during the coronavirus pandemic.

Brown thought up a drive to leave informative door hangers about the pharmacy throughout the neighborhood. That effort started in early April, with Brown and her husband making runs around Church Hill in a bid to peel off patients of nearby competitors.

“We were able to get a lot of new patients that way,” she said.

The pharmacy found other ways to expand its service during the pandemic. An already existing delivery service was expanded from seniors and senior living homes to include anyone in Church Hill. It also made its own hand sanitizer and sold it as another new revenue stream.

The pharmacy also expanded its services to dogs and cats with the addition of pet prescription medications this summer. The move was less about driving revenue than it was about giving customers another reason to patronize the pharmacy.

Brown opened the pharmacy, which is inside The Market at 25th grocery store, in April 2019. The Richmond native attended Howard University and worked as a pharmacist for Ukrop’s Pharmacy and more recently as the pharmacy manager at the former Sam’s Club at White Oak Village in eastern Henrico. That building was sold for $7 million in February to make way for a T-Mobile call center.