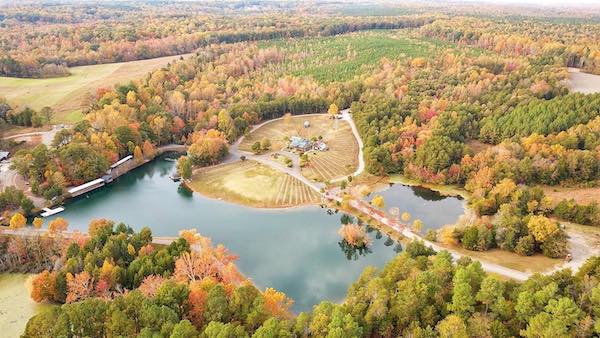 An events venue in Goochland is upping the ante.

Rassawek Vineyard, at 6276 River Road West in the far western part of the county, plans to expand its offerings beyond its current annual festival, weddings and workshops to include amenities like camping, short-term rentals, a zipline course and a retail store. There are also plans for an airstrip.

The expanded programming comes as the next chapter for the 1,000-acre property, which for a decade has hosted the annual Rassawek Spring Jubilee.

Rassawek, which features a vineyard that sells grapes to local wineries, is owned by the Liesfeld family, which purchased the land in 2000. When the family bought the land, there weren’t any buildings on it. That’s changed over the years as a handful of historic structures in the region have been purchased, restored and moved to the property.

Some elements of the expansion could be ready by early 2021, in what’s planned as a five-year effort.

Earlier in October, the Goochland Board of Supervisors approved a broad conditional-use permit that would allow the new amenities and programming, as well as larger crowd sizes for events.

Though currently the venue welcomes guests for specific events, that will change with the introduction of a calendar of select weekends when the property will be open to the public in a manner similar to a park. The venue is slated to hold its inaugural Rassawek Autumn Festival next year.

“We’re ready to expand into more ways we can be open to the public,” said Jessica Jessee, Rassawek’s event planner.

There will be camping as well as a handful of short-term rental units.

“We intend to use our camping for our larger events where we have vendors coming out of town and would like to stay on the property,” Jessee said.

Here’s a breakdown of what the venue’s new CUP permits it to do:

• Construct an airstrip, which would be used for airshows or to land aircraft featured in displays.

• Build a camping area of 10 campsites, which would cater to both tent and RV camping.

• Open a store that would sell prepackaged food, drinks and retail items. The store would be open during events and certain days.

• Set up a zip line course.

The public-access weekends, the store and short-term rental cabins are expected to be up and running in the first half of 2021, with other programs and amenities to come in the following years, she said.

With the new county approval, Rassawek can use 355 acres for activities. Previously, only about 70 acres were open to programming.

Also in Goochland, the county government recently opened a consolidated office for the economic development department and chamber of commerce. Hill Top Distillery opened over the summer at 2750 Maidens Loop.

don’t want to state the obvious here, but sounds like they want to host some music festivals!