Hanover County officials participate in a ground breaking ceremony for a new terminal at the county airport Nov. 4. (Courtesy of Hanover County)

Hanover County officials broke ground Nov. 4 on the site of a new terminal building to be built on the east end of the county airport. The COST terminal is expected to be operational by the fall of 2021.

The terminal will feature a conference room, flight planning areas and a pilot lounge. The facility is budgeted at $2.5 million, a cost mostly borne by a grant from the Virginia Department of Aviation.

The terminal will be 7,000 square feet and built next to the Luck Stone hanger that was built earlier this year. The airport, which is designed for mid-sized corporate jets, is home to about 100 aircraft. 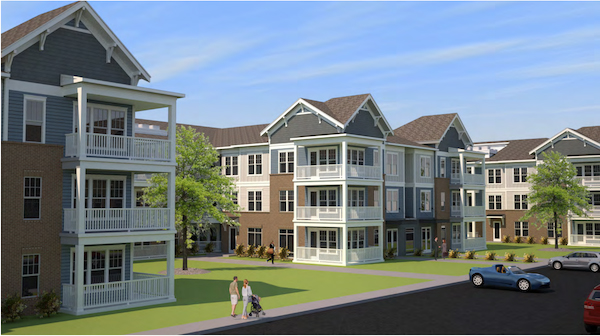 Henrico County supervisors meet in regular session at 7 p.m. Tuesday. Public hearing items include rezoning and permit requests for Laurel Park, a proposed mixed-use project by Aurelie Capital that would replace the aging Laurel Park Shopping Center with 350 apartments and 12,000 square feet of commercial space. The Planning Commission endorsed the project in October.

Businesses may now apply for up to $100,000 in financial aid through the program, which launched in August with a maximum award limit of $10,000. The increased grant ceiling was announced by the governor’s office on Oct. 28. The program’s funding pot has been increased by $30 million.

Businesses that have gross revenue of less than $10 million or fewer than 250 employees are eligible for the program. Businesses that already got a grant through the program will get a second award in line with the new eligibility guidelines.

The grants can be used for payroll, rent, personal protective equipment and other expenses. To submit an application and for more information, visit governor.virginia.gov/RebuildVA. 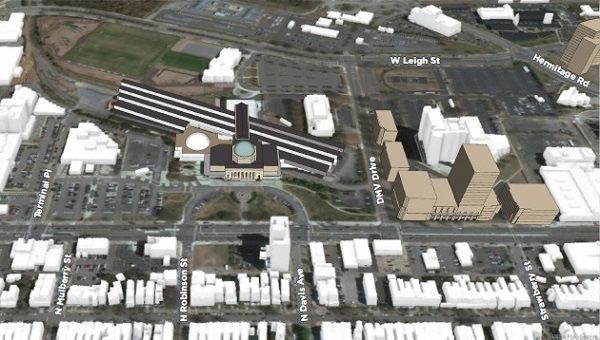 New renderings show potential building heights along Broad Street and Hermitage Road near the Science Museum of Virginia. (Courtesy of City of Richmond)

The Richmond City Council meets in regular session at 6 p.m. Monday. Business on the agenda includes a vote on a third phase of proposed zoning changes tied to the city’s Pulse Corridor Plan. This latest round focuses on land primarily north of Broad Street across from the Fan, in and around the Carver and Newtowne West neighborhoods between Belvidere Street and the DMV headquarters building.

The council has deferred the vote twice since September, when members cited concerns from neighborhood groups over potential building heights. The changes in some cases would allow building heights of 20 stories or more, including several spots along Broad directly across from the Fan.

The council also will consider renaming Confederate Avenue in the Laburnum Park neighborhood to Laburnum Park Boulevard, and appropriating $60,000 in funding from St. Catherine’s School for a signalized pedestrian crosswalk across Grove Avenue at Somerset Avenue. Those items are included on the consent agenda that is typically voted on with no discussion. Full agenda available here.

Other business on the council’s agenda Monday includes a request from Branch House Associates LLC to amend the museum’s special-use permit to increase allowable event sizes from 150 to 300 people, as well as to allow a dwelling unit for an artist-in-residence and retail space.

The Planning Commission last week supported the request with conditions including that no more than 25 events annually shall be wedding receptions, and that satellite parking will be made available for events exceeding 75 attendees, among other requirements.

The city had received opposition to the proposal from six area residents, and support from four residents and four community groups. The Fan District Association submitted a letter of no opposition.