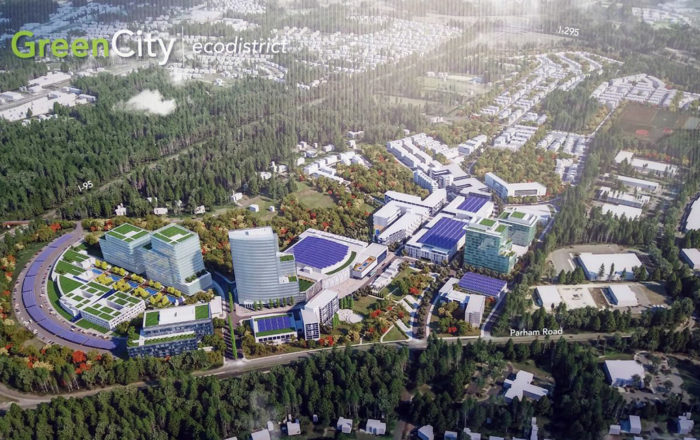 A rendering of the GreenCity project.

This is breaking news. Click here for a full report on the project.

The developers behind the former Navy Hill proposal in the city aren’t giving up on bringing a new arena to the Richmond region.

A group including Michael Hallmark and Susan Eastridge are planning a massive $2.3 billion arena-anchored development on the Henrico-owned 93-acre former Best Products site, according to an announcement made by the county this morning.

The $250 million multi-purpose arena would be comparable in size to what Hallmark and Eastridge had proposed as part of their involvement in the unsuccessful Navy Hill development which would have replaced the Richmond Coliseum. That project was killed by Richmond City Council in a heap of controversy earlier this year.

“This is what we do in Henrico: Smart economic partnerships with no risk and significant benefit to the tax payer,” he said.

GreenCity would be financed in part through the creation of a community development authority, which would allow for the sale of private bonds that would be repaid with taxes produced by the development.

“GreenCity will be a private development financed with private bonds,” Vithoulkis said, adding that the county has experience working with developers on large CDA-fueled projects, such as Short Pump Town Center, Reynolds Crossing and White Oak Village.

Henrico has owned the Best Products site, which sits along the I-95 corridor off Parham Road, since 2011. It paid $6.2 million for the property. The county said it would sell the property for that same price to Eastridge and Hallmark’s venture, pending a Board of Supervisors approval at its Jan. 26 meeting.

The developers expect to submit a rezoning proposal in early 2021 to have the property designated under the county’s urban mixed-use classification.

This is breaking news. Click here for a full report on the project.

I’m excited that they want to do this, at a location that is screaming for more development. East Parham has access directly from I-95 and indirectly from I-295, but East Parham is just two lanes each way from that I-95 ramp and the stoplight on Meadowbridge Road. Access for a 17,000 spectator event will be a challenge without alternatives. I’m sure they’ve considered this issue and have a solution up their sleeve.

Instead of Meadowbridge Rd., I am assuming you mean Chamberlayne Rd.

I do! thanks for the correction.

Don’t count on it. Visions of dollars dance in their heads.

This is great news not only for the County of Henrico, VA but the citizens of the Richmond area as well. Think about the economic impact of this and the Virginia Center project. Henrico is one of the best managed counties in the country.

This is similar to approximately 2.5 new James Center sized complexes (in retail and office) with an attached apartment complex. Where is there demand in the market for that much new office space? Retail is not the only sector who has changed permanently. Even with a vaccine many offices are going never go back to full staff. And this will be just down Brook Road essentially from a smaller but cheaper soon to be built arena owned by the County. Does anyone think Henrico would issue bonds or create an authority to support this??

The county should have shared this with the Northern Henrico Civic Association. For those of us who live in the area, the traffic is already incredibly dense. I can’t see how the existing infrastructure will support this.

Are you assuming there will be no improvements to the existing infrastructure? That would be a poor assumption.

Since that will take work on 95, 295, 301 and all roads in between, it is a lot of work that is not yet evident. I can understand the concern.This is also close to the other Henrico sports arena project at VCC. Are they trying to corner the arena market?

The VCC project is not an entertainment venue, but a participant venue. I think they can handle something like 24 basketball games at the same time, and a similar number of volleyball games. It’s made to attract events (and the spending that come wth it). The Green City venue is trying to draw people who want to watch an event. I don’t see a conflict between the two. I do think the devil is in the details as far as what this will do to traffic in the area. I don’t think people in fredericksburg are happy with Massaponics and… Read more »

@Garry, ot sure what “not yet evident” means,but there is a long way to go for this to be approved, regardless of seller. I think the iinterstates will have Federal funding, and I assume the developer would pay for most of the local/state road improvements.

Heck, my father’s company cleared the land for virtually all of 295, and I had no idea why they expected all of that traffic!

I am so proud of Henrico right now.

A project with a price tag about $700 million more than the one proposed in the City of Richmond. Fascinating.

Also, can the Stoney stop holding the Coliseum as hostage for his political agenda? It’s turning into skidrow, at the mere savings of $500,000 a year. I really hope the decision to shut down the Coliseum haunts him.

Love it. Richmond, you deserve this loss.

Excellent job Henrico!! Concerts, Hockey will return to the county. Sorry for your luck City of Richmond!!

We will see. Metro Richmond does not have a history of long-term supporting minor-league hockey teams. And this is really the same package that they were trying to sell in the city. In Henrico will create an authority to issue bonds according the manager statement. And I’d love someone to show me a midsize city anywhere in the world that has a public arena that makes money. Especially one that makes it after 15 to 20 years of use. What is really interesting, and Bizsense didn’t cover it today, Is the city put out a pre-RFP survey for a casino… Read more »

In order of popuation, metro areas in the US include: OKC, Raleigh, Memphis, RVA, New Orleans, Louisville, Salt Lake City, Hartford and Buffalo. (https://www.statista.com/statistics/183600/population-of-metropolitan-areas-in-the-us/). Most of these cities have major league sports, not to mention minor league teams.I know you mentioned a public arena making money, but there are plenty of public facilities that aren’t profitable. Just an observation. At least Henrico has far better management, as do most surrounding jurisdictions.

Hey Matt we have a minor-MINOR league hockey team some college and post college players. It is USA Hockey official development league and associated with the New Jersey Hitman. Not a joke that is their affiliate! The league plays at SkateNation here and other SMALL venues. AHL and ECHL leagues have nothing in Virginia now that the Norfolk Admirals are dying. The Admirals have no affiliation with a major league team anymore and have suspended operations for the 2020-21 season. RVA has a BAD history with hockey and other minor league teams. I think it is less about populations or… Read more »

Michael, I agree Parney could make anything work. I was speaking more to overall support, no Cheerst just hockey, BUT…I did manage to see a lot of Robins’ games in the ’70″s! Cheers!

I was never a diehard hockey fan but was a Renegades season ticket holder back in the day as we had a great time at those games. I don’t follow hockey that closely now but have been amazed and what I perceive is a huge increase in hockey fans compared to 25 years ago in the area. When the Caps won the Stanley Cup in 2018 I was shocked at how much lunch room chatter was about the games. I see a lot more youth teams playing in the area now and a lot more NHL jerseys on the streets.… Read more »

I’m so glad to hear this news! Finally, for a change, city residents get to sit back and relax while county residents scream and call each other names.

The county is selling almost 100 acres for the same price as they bought it almost a decade ago, that’s not normal.

“This is what we do in Henrico: Smart economic partnerships with no risk and significant benefit to the tax payer,”