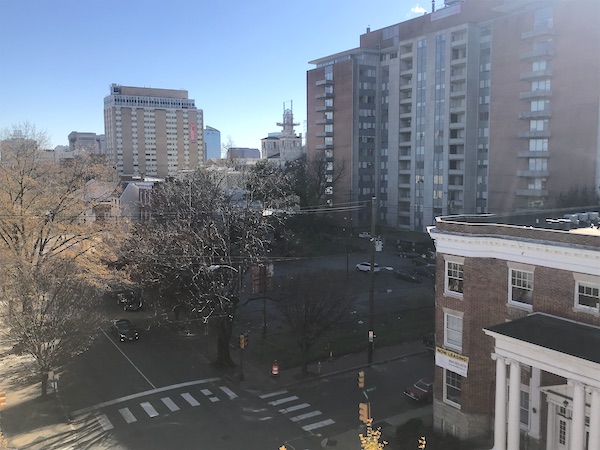 This half-acre parking lot is the site of a proposed 15-story tower with 171 apartments for VCU students. (Mike Platania photo)

Two years ago the city rezoned large chunks of Monroe Ward in an effort to drive out the neighborhood’s many surface parking lots and promote more dense development.

The initiative is beginning to have the desired effect, as it recently helped spur the first piece of a project that could eventually bring a new residential high rise on a half-acre lot near VCU.

Chicago-based developer Pinecrest last month paid $2.5 million for the parking lot at 321 W. Grace St., where it is planning a 15-story student housing tower. The lot was most recently assessed by the city at $546,000.

Pinecrest bought the land from Thalhimer Realty Partners, which snagged it as part of a portfolio sale last year that also included The Towers on Franklin apartments just to the east.

Spanning 253,000 square feet, Pinecrest’s tower would total 171 apartments, all of which would be two-, three- or four-bedroom units. A podium-style parking structure with 67 spaces would adjoin the building. 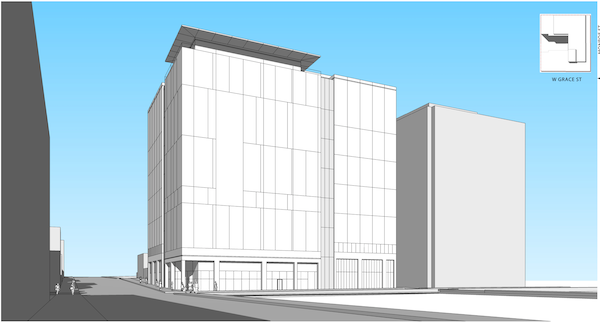 Though the building was part of the 2018 rezoning to B-4 Central Business District, the project needs a special use permit that would ease restrictions regarding the building reaching past abutting streets.

“We remain very excited. We believe in the project going forward and in all the things going on in Richmond and around VCU,” Perlmutter said.

The project is likely to be at least four years away from being completed. Perlmutter said Pinecrest is aiming to break ground in the first quarter of 2022 and hopes to have the building come online in time for the 2024 academic year.

Thalhimer Realty Partners principal Matt Raggi said after purchasing the lot the company amended the zoning on the property so that it wasn’t tied to the Towers on Franklin, freeing it up to be sold. Pinecrest approached TRP about a year ago and they put together a deal off-market.

“We had it in the back of our minds when we bought (the land) that it might have some value,” Raggi said.

TRP has instead been busy wrapping up work renovating the Towers on Franklin apartments. Raggi said they recently finished renovating the apartments’ interiors, and that they added lounges and game rooms to both towers.

“Frankly, we kind of pushed forward during the pandemic,” Raggi said. “With the slowdown in student leasing we thought it was a good chance to finish off renovations while things were slow.”

Its refreshing to see that a newcomer to the City development scene is cognizant of the time it will take to get a site approved, permitted and built. So many announce their land purchase and state that they’ll be underway with construction within 90 days, unaware of what’s ahead of them. There is at least $ 1.2 Billion of assessed value construction tied up in City Hall as of this morning which will produce about $15 Million annually in tax revenue. The Mayor announced more than a year ago he’d do what it takes to free up the backlog of… Read more »

I’m glad they are replacing a parking lot with this building it’s nice that they are not going to cut down a acre of trees to build it.

Richmond seems more aggressive at upzoning then a lot of other places that don’t do anything about the hosing shortage but complain.