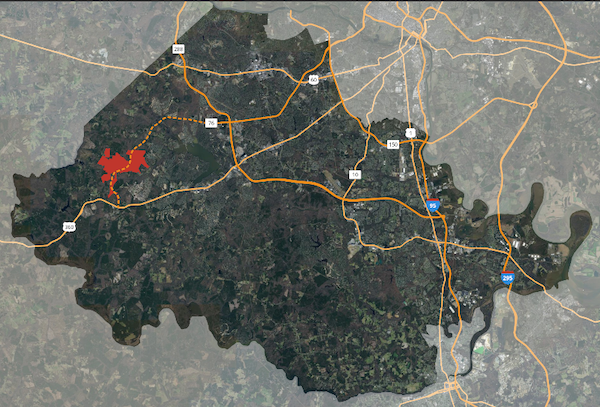 Just what happens next is up in the air. EDA Director Garrett Hart said in an email that there “are no specific plans for the property at this time.”

But the county hinted in its announcement that commercial and infrastructure development could be in the land’s future.

Chesterfield officials see the land as a key element of the county’s development over the next couple decades. The land straddles the proposed route for an extension of Powhite Parkway to connect it with Hull Street Road, and contains right-of-way required for the proposed road.

With the acquisition, the county will have a firm hand in the land’s development, and the announcement stated that growth would be managed “in ways that are an improvement over the current permissible zoning” and “to create jobs and commercial investment closer to where people live, not just residential homes.”

The land has been zoned for residential use, though it’s currently undeveloped, Garrett said.

“Upper Magnolia represents one of the best opportunities for us to regain control over the current large-scale traditional residential development to plan for better land use options, including creating quality jobs so more of our citizens can locally commute shorter distances,” County Administrator Joe Casey said in the announcement.

The EDA bought the land, which consists of multiple parcels, from New Jersey developer Salvatore Cangiano, who previously owned the property that has since become Magnolia Green. Hart said Cangiano didn’t want to comment on the deal, which closed Dec. 18.

The acquisition accounts for more than half of the $24 million that the county’s Board of Supervisors voted to provide to the EDA for acquisitions on Dec. 16. Earlier this year, the EDA spent $21 million to expand Meadowville Technology Park near Chester by about 350 acres.

The Upper Magnolia land is the latest sizable assemblage that the EDA has focused on in hopes of attracting new development. In 2018, it positioned a 1,675-acre tract southwest of Chester as a so-called industrial megasite. It withdrew that proposal amid local opposition, and the bulk of the site was later approved for a solar farm and data center.

This is a play for the very longterm if the County believes this is a future employment area. I dont see that as likely. I suspect the purchase is mostly defensive in nature. The County has just removed an area from residential development, zoned for thousands of future homes and school children. New schools are expensive as is the land to build on. The purchase also provides a ROW for the planned extension of the Powhite, rerouting traffic from Hull Street and Woolridge Road. That ROW may have cost almost that much to obtain through neighborhoods if they had been… Read more »

Chesterfield County seems intent to bulldoze every tree along Rt 360 to the Amelia County line. Hull Street Road is already conjested enough and overdevelopment is not needed.

I pray they don’t do this, the amount of land that’s been demolished in the past 20 years has taken away from many animals that have thrived in these wooded areas for centuries, I grew up here and the amount of deer I’ve seen hanging out on open grasses literAlly lying on the ground where there home once was, it’s heart breaking . Its cruel and unfair , this was there land before ours. We can share they do with us…when money stops being an object in people’s lives we might actually live better lives. Ill be honest… If it… Read more »

I lived for fifty years in Connecticut and now four years here in Chesterfield. CT teaches you just how poorly funds, land and infrastructure can be managed. Hull St. West of 288 can be a jacked up mess at times due to volume but compared to I-95 from New Haven to the NY line it is still an improvement to us. My wife and I are quite pleased at how well this county is run. Just saying. 🙂

I left Chesterfield to get away from this. Now it follows me. Not a happy Christmas gift. I never saw the Milky Way till I left Chesterfield County. There was just too much light pollution. I do see an opportunity though. Change that: a challenge. If Chesterfield can develop this area without damaging too much biodiversity, if the county can actually take into account that wildlife is an essential part of healthy human life, perhaps there is a way. Consider that everything that is done to the ground goes into the ground water. Every life needs water. Consider that for… Read more »

Chesterfeild County should turn this 2,000 acres in to a large public park of Green Space to protect the Swift Creek Reservoir. Also if this 2,000 acres stays forest even with the Powhite Parkway running though it the 2,000 acres being a park would cut down on traffic more then any road improvement the County can fund. Due to not every acre being filled with parking lots and automobiles.