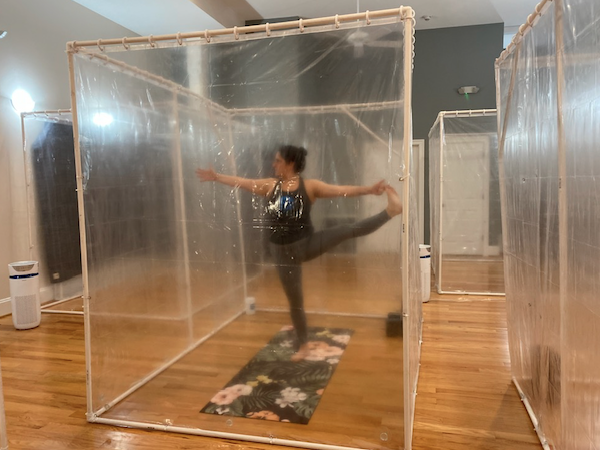 3S Yoga recently unveiled five custom-made pods in the hopes of creating a safer environment for in-person classes at the studio. (Courtesy of 3S Yoga)

Forced by the pandemic to stretch beyond its usual setup, a local yoga studio has turned to custom-made pods and air purifiers to offer in-person classes during the winter months.

3S Yoga in mid-December unveiled five personal yoga pods, which are intended to help control the movement of students’ air particulates during in-person instruction. The pods, along with four UV air purifiers, are how the studio plans to provide in-person classes as the temperature drops and the coronavirus pandemic continues.

The pods are a custom job of plastic shower curtains and PVC pipe, and they’re held together with zip ties and grommets. Measuring 6 feet wide, 8 feet long and 7 feet high with open tops, the pods are big enough for two people to practice yoga together.

Studio owner Nadeya Ward declined to share the investment she made to buy the pods and the purifiers.

Ward had already offered in-person classes inside the studio, but she left the doors open to circulate air as a coronavirus mitigation strategy. The CDC recommends ventilation of indoor spaces, along with other measures, to reduce exposure to the coronavirus because air flow helps to lower the concentration of viral particles in the air.

The onset of winter meant it became too cold to continue to leave the studio’s doors open during operations. Ward started to do online research to find a way to offer the safest in-person programming that she could.

“In the spring and into the fall I just kept the doors open and put tape out to space everyone appropriately apart with both of the doors open so there was air going through the space,” Ward said. “As the doors closed, I just didn’t feel safe as a business owner. I wanted the people in my space to be as safe as I could allow them to be.”

Ward worked with Image360 in Midlothian on the pod design, and the company built them.

“I still do think that staying at home, if it is an option, is obviously the best option and the safest option,” Ward said.

Ward said the studio, which opened in January, has been able to get by on membership fees.

“I’m really fortunate that the people that have come to this studio love it enough and want me to get through because they really want a yoga studio when this ends,” she said.

Love seeing this! Way to go make it happen!