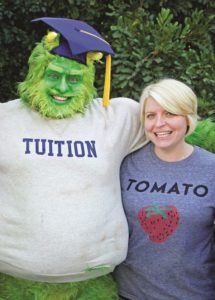 C.J. Hawn with the Tuition Monster “anti-mascot” she created. (Photos courtesy of Elevation)

In the 200-plus TV spots that C.J. Hawn has overseen in her time at Elevation, two characters she created stand out from the pack.

There’s Buster, the Jack Russell Terrier that’s the face of Virginia Green’s “Respect the Lawn” campaign. And then, there’s the Tuition Monster: that sarcastic, green man-beast who gives parents every reason to start saving for college in Virginia529’s long-running ad series.

Both mascots — or in Tuition Monster’s case, “anti-mascot” — were spawned by Hawn, who just completed her first year as Elevation’s sole creative director.

The role for years had been shared by agency founders and principals Aaron Dotson and Frank Gilliam, who now bear the titles of executive CDs. Hawn — previously one of three associate CDs, along with colleagues Kate Bredimus and Beth Borum — now anchors the middle of that creative direction team, her promotion marking her more than a decade with the agency.

Hawn talked with BizSense over Zoom to discuss her promotion, Elevation’s creative process, and how she came up with Buster and Tuition Monster. The following is an edited transcript:

Richmond BizSense: Congratulations on your promotion. How has it changed your role with the agency?

C.J. Hawn: Frank and Aaron were always the creative directors at Elevation, and we just got to the size where we really needed that additional level of leadership in there. That’s what prompted that. It didn’t really change that much for me. I’m just end of the line on a lot more decisions with more clients. 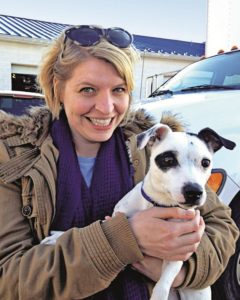 Hawn with Buster from the Virginia Green ads.

RBS: Tell us about Buster and the Tuition Monster. How did you come up with the ideas for those characters?

CJH: For Buster, anybody who knows me knows that I’m a dog fanatic. If I can sneak a dog into a spot, there’s going to be a dog in the spot, just because I want a dog on set.

When you get a brief, the first thing you do is you ask a lot of questions. If it’s a problem that’s been solved before, I want to take a look out there and see what other people are doing and how they’re solving it, so then I know that’s where I don’t need to go. It seemed like a lot of people were addressing lawn care from the perception of people, and I’m like, “Well, who’s out in the lawn maybe just as much as the people who own the lawn?” And of course, that’s the dog.

Telling the story from the dog side is how that happened and became a lot of fun. I really enjoy that because it’s visual storytelling. Even though I do both the art direction side and copywriting side on projects, I really enjoy when I can tell a story just with the visuals, and that’s what the Virginia Green spots have been.

RBS: What about that green guy?

CJH: For the Tuition Monster, given the anxiety that parents feel about saving for college, it was just giving that a persona and personality and making it a little more real, instead of this kind of ephemeral thing that’s just out there. I’d written “Tuition is a monster,” and that was the “aha” — what if tuition was an actual monster, and the embodiment of all those feelings I’d written down: the anxiety and stress and uncertainty? That’s how he came to be as our anti-mascot.

I think that it’s done really well for the client. It’s sticky, which is really cool. He’s such a great character, and even after eight years, we feel like there’s still a lot of stories to tell for him. There’s nothing cooler than seeing kids run up and hug the Tuition Monster at events and know that you had a part in that.

RBS: How do you keep a creative mind? Do you go to particular stimuli to come up with fresh ideas?

CJH: Prior to COVID, I was a big traveler. I rarely had an unpacked suitcase. Just getting out there and seeing things and meeting people. I have a running note section on my phone that at any point in time has 1,200 or so notes in it of things I’ve seen that I’m like, “OK, that has to be something somewhere.”

It’s just basically keeping my eyes and ears open. There’s not one source. It’s everything and everyone you meet. There’s a story there, there’s a nugget of truth there that can be used in some way.

RBS: How has Elevation shifted its strategy and approach to producing ads during the pandemic?

CJH: On the video side, normally you would be in the studio or on location. You would have the client there, you would be there; you would be very hands-on with everything that’s happening on the set. We’ve been able to move to a virtual way of doing that. We are still very much, through the pre-production process to post-production, as involved as we were pre-COVID; just a little bit different way of getting it done. 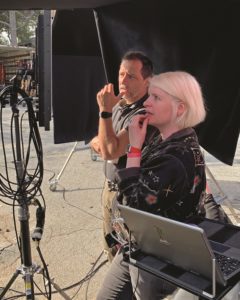 Hawn on an ad shoot.

On one of our earlier shoots (during the pandemic), I had my desktop set up, and that was my Camera A; I had the director with me on my iPad; I had the client on my laptop; and then the account team was on my cellphone. We had all the different streams going at once, and it worked! It was a little bit longer of a day, maybe, because you are playing a little bit of relaying. But gosh, we made some really beautiful things. We’ve done several shoots since then, and each time it gets easier and easier.

RBS: Is it more challenging collaborating with your team remotely?

CJH: It’s almost easier, because you can kind of see everyone at a glance. We have a virtual setup so that you can kind of see everyone if they’re online. At the office, you’d get up and walk around; this is just click and I’m there. We’ve been able to pull together so nicely to get things done. And now, I know what everyone’s pets look like, which is awesome; I see inside everyone’s houses. I think it’s actually brought us closer in a lot of ways.

RBS: If you could ask any person you admire one question, who would that person be and what question would you ask?

CJH: I have always been a huge fan of Tibor Kalman. He passed away in 1999. He was known as the bad boy of design in the ’80s. People have said he was just as influential to design in the ’80s as the Mac was. He had his own agency and then company, but he also was the editor-in-chief for Colors magazine during that run and was really into the “creative as an activist.”

He was subversive, but he really pushed the “If you are communicators, you should use the power that you have to be out communicating and doing something to make this world a better place.” I would love to pick his brain on what you would be doing right now, with everything that’s going on, because I feel like he would have this beautiful way or some brilliant idea to bring us all together in a time when we’re all so divisive.

CJH: It stands for Carrie Jane. When I got on the hallway freshman year at Hollins (University), there were three other Carries on the hallway, and that wasn’t going to do. There was a tall Carrie and a short Carrie. I was the middle Carrie. That wasn’t going to fly, so C.J. was born. One of the things I like about it is when people see my name or see my work, they don’t know, “Did a woman do this? Did a man do this?” I kind of dig that it’s this neutral position that I’m in.

Thank you for showcasing CJ’s amazing work! We love her talent and creativity!

Congrats on the spotlight, CJ! Your talent and tenacity have always been inspiring, about time it was publicly recognized.

I am quite dismayed that a very big problem in the US ca be reduced to a cutesy mascot. It normalizes the fact that people can be 180 thousand dollars in debt from a 4 year degree. Hope I didn’t ruin your party just pointing out a fact.

Was breast cancer awareness reduced to a cutesy symbol by adopting a pink ribbon?