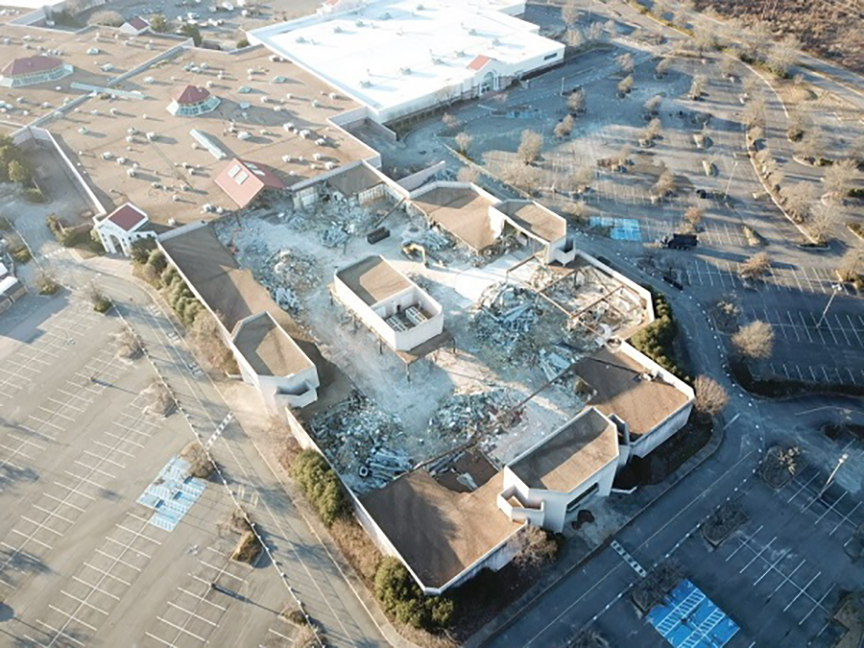 An aerial shot of the demolition underway at the former Macy’s store. (Images courtesy of Rebkee Co.)

With demolition underway and more property in hand, a public-private effort to transform Virginia Center Commons from a suburban indoor mall to an urban-style mixed-use village is beginning to come into view.

Developer Rebkee Co. started work in recent weeks to raze the former Macy’s store at the mall’s eastern end, where collaborator Shamin Hotels is planning a hotel that would anchor the new development — a mix of residential and retail –—alongside an indoor sports and convocation center for Henrico County.

Around the same time, Rebkee and Shamin purchased the mall’s J.C. Penney store, initially excluded from their plans but now part of the project. The roughly 7-acre property on the mall’s northern side sold Jan. 26 for $3 million. The transaction was first reported by the Times-Dispatch. 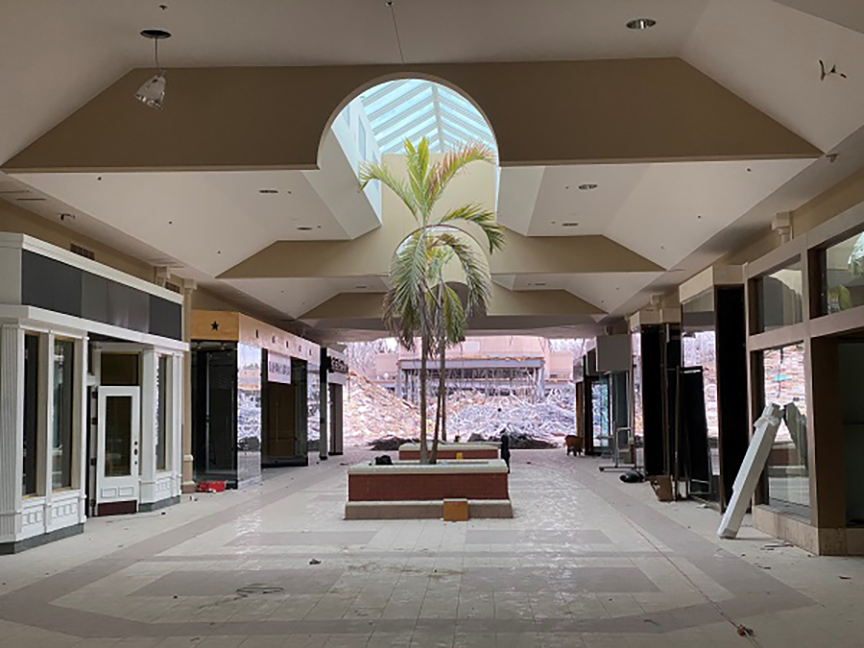 Remnants of the mall are shown with demolition underway.

The purchase adds to more than $10 million that the firms had previously spent to acquire the rest of the mall site, save for the American Family Fitness building at the western end that remains under separate ownership. The fitness chain is in the midst of a 10-year lease on that building, but plans recently shared by Rebkee principal Rob Hargett show that the structure is envisioned to ultimately be razed, to make way for more residential and retail development.

“We’ve assembled most everything we can assemble,” Hargett said while providing an update on the project at a recent county meeting. “There’s nothing else for sale out there. We’ve got control of everything that we want to control.”

Hargett — whose firm also is redeveloping, with Thalhimer Realty Partners, the former Regency Square mall in Henrico — was presenting the latest plans for the Virginia Center project at a constituent meeting hosted by county Supervisor Frank Thornton, whose Fairfield District includes VCC.

Reviewing aerial shots of the VCC property, Hargett said: “It’s not pretty. It’s worse off than Regency Square was when we bought that one. However, it’s going to be a different journey with this mall.”

He added, “This mall is more of a teardown, where Regency Square has been more of an adaptive reuse. This will have its own set of challenges.” 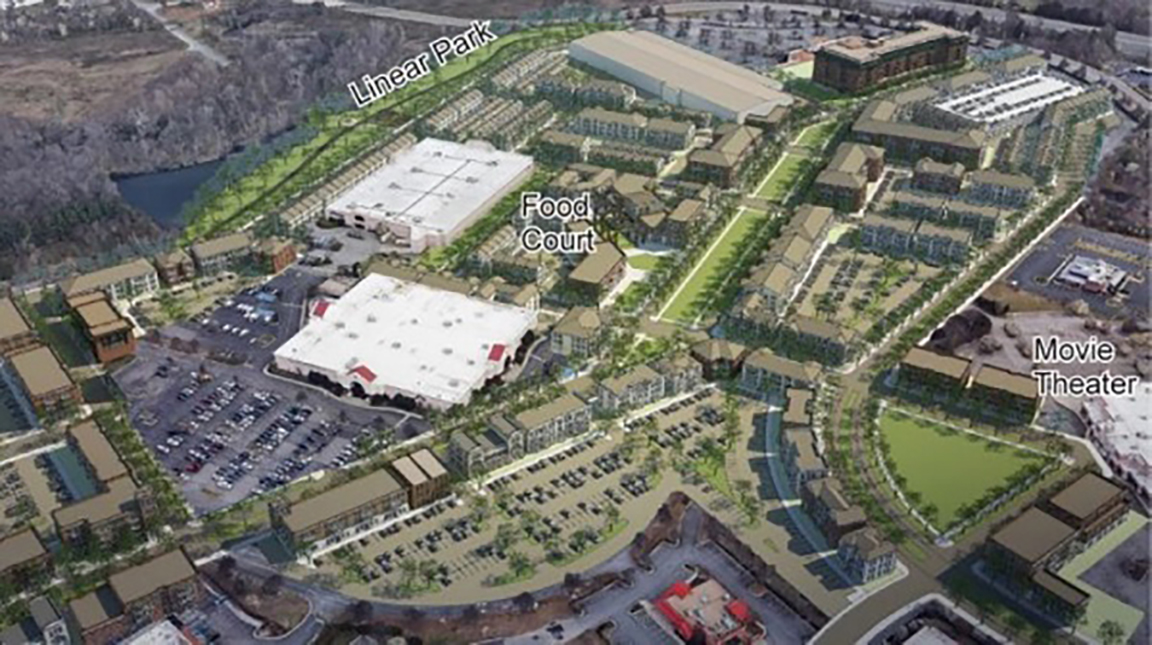 The phased development would replace the mall with residential and mixed-use buildings. The hotel and arena are shown at top.

Form-based code in the works

One challenge Hargett mentioned is development of a form-based code to guide rezoning and development of the site. Hargett said talks with county planners are underway and that the process could play out over the next several months.

“Hopefully, by this summer, we’ll have some form-based code in place and be able to start really putting some ideas to the pavement, if you will,” Hargett said. “Because that’s what we have here: a lot of pavement.”

Hargett referred to a charrette — an intensive planning session involving various stakeholders — that resulted in the latest conceptual plans for the site. Those plans show the bulk of the site filled with multifamily residential and mixed-use buildings, as well as park spaces and greenways, including a primary greenway that would form a type of pedestrian “main street” through the site.

The hotel and arena, closer to Interstate 95, would be built first, with the rest of the site filling out after that. While the mall would be replaced, the plans do call for retaining the food court structure and adapting it as a central, open-air gathering area, which Hargett highlighted.

“I’m an adaptive reuse guy. If there’s a possible way to save something that honors the old mall, we like to do that,” he said.

Plans show that existing businesses outside the mall’s loop road would remain, including the Regal Virginia Center movie theater and a Comfort Suites hotel. The area also is home to several restaurants, a brewery, and various retail and office buildings.

A rendering of the arena shows additional courts outside for sand volleyball.

Hargett also presented new renderings of the arena, which the county would own and operate to host indoor sports events and high school graduations. The 4,500-seat facility also is envisioned to host small concerts and could be used by area churches for events, Hargett said

The indoor courts would be designed primarily for basketball and volleyball, though Hargett said the space could also accommodate other sports such as gymnastics, wrestling, futsal and pickleball.

A soundproof divider curtain would separate the courts from the convocation center to allow for multiple events at a time, and a mezzanine would include a coach’s lounge and other viewing areas.

The indoor courts will be designed primarily for basketball and volleyball events.

The rest of the 215,000-square-foot facility, which would replace the former Sears building, would include meeting rooms, a concessions area, and a bar and dining area with TVs showing the sports at play. Outside, the facility would include additional courts for sand volleyball and a designated food truck area.

As for the residential components, an initial batch of 75 townhomes received zoning approval last month for a 5-acre site between the mall and Brook Road. Stanley Martin Homes is building the three-story townhomes, which would be priced starting in the high $200,000s and fill the undeveloped site beside the Wendy’s restaurant and Virginia Credit Union branch. 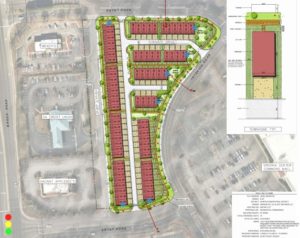 Hargett said he would like to see the rest of the development include as many as 300 income-based units, including for households making below 80 percent of the area median income. He also said minority-owned businesses would be involved in the project.

He added, “The first flag in the ground is that sports facility. We’ve taken a good amount of time to make sure we get that right, because we want it to be successful. That’s going to push the hotel to come that (Shamin) is going to build right next to us, and I think getting that first cornerstone done properly is going to feed the success of the rest of the property.”

Henrico County has embraced the redevelopment of the I-95 corridor with this and the proposed East Parham Road plan. Rebkee has some serious work underway at the old Mall. Hopefully Henrico will take a good hard look at the rundown retail and industrial US Route 1 corridor that links East Parham to I-295. That strip will look sad in comparison. in the meantime, there’s nothing in the news but good news and growth for Henrico County.

Glad to see the dead-area of VCC mall is on the path to better uses. It is a move of continued prosperity for Henrico.

Stony Point Fashion Park should do something similar.

It may be inevitable that it happens, but the open air look that is getting so popular is already how Stony Point was developed. I could see some very dense apartment development there.

I’m just happy the movie theatre will remain untouched. Once it reopens, the studios start putting out movies, and all the new residences are filled, it should do some good business.

It’s too bad they couldn’t have filmed some sort of disaster film during demo. Those scenes look surreal! Love the drone shots too!

Once again the County of Henrico gets it. Are you paying attention City of Richmond “leaders” ?