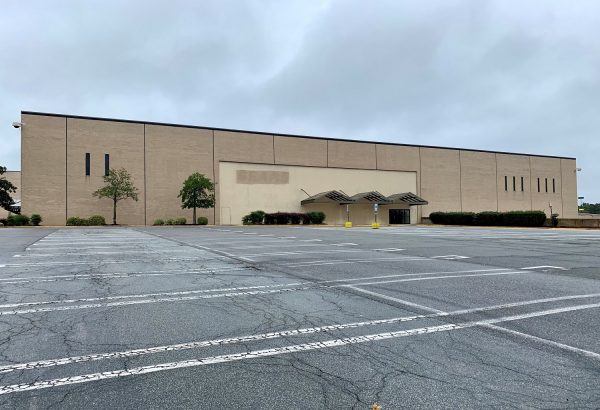 The former Sears building at Regency Square Mall is set to be razed and replaced by a 270-unit apartment development. (J. Elias O’Neal)

The mixed-use conversion of Regency Square mall continues to move forward, with plans submitted for the redevelopment’s first residential component.

The Rebkee Co. and Thalhimer Realty Partners filed plans last month for construction of a five-story, 270-unit apartment structure on the site of the mall’s now-shuttered Sears space.

Plans filed with Henrico County call for the Sears building to be razed and replaced by the apartments, which would wrap around a central, four-level parking deck totaling 337 spaces. A new two-lane roadway with several parallel parking spaces would run between the main mall building and the proposed apartment complex.

This is the first residential project announced for Regency Square, which Rebkee and TRP have been redeveloping since purchasing much of the mall’s property four years ago for $13.1 million. The developers bought the Sears building, along with 8.7 acres of surrounding surface parking lots, in March 2018 for $3 million, according to county real estate records.

Sears announced in 2017 plans to close the nearly 152,000-square-foot location. At the time, Sears and J.C. Penney were the last two anchor tenants at the mall. Prior to Sears’ announcement, Regency had lost its two Macy’s stores in March 2016 after it announced plans to downsize its national footprint.

The apartment development would not affect several existing storefronts in the Sears concourse area of the mall, where the food court, a Forever 21 store and a children’s play area are located.

A cost estimate for the project is not mentioned in the planning documents. The plans do not indicate whether the development would occur in phases or all at once.

Calls to Rebkee and TRP were not returned Tuesday afternoon.

Kimley-Horn is listed in the plans as the project’s civil engineer. Midlothian-based Poole & Poole Architecture is designing the apartments.

According to the plans, the apartment project would not involve the 3-acre former Tire America by Sears site near the corner of Quioccasin Road and Starling Drive. Rebkee and TRP purchased that property in April for $2.1 million.

The developers do not own the 160,000-square-foot J.C. Penney building and its surrounding 7 acres, nor do they own the 1.4-acre Firestone Tire building that fronts North Parham Road. The tenants own those properties.

The apartment development is part of the companies’ overall plan to transform the Regency Square property into an entertainment and lifestyle center with housing, restaurants, breweries and other commercial uses. 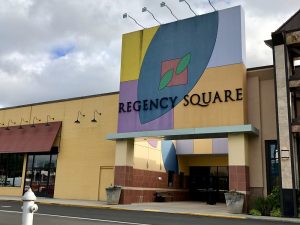 Regency Square Mall is undergoing a $35 million redevelopment that will transform it into an entertainment and lifestyle center including apartments. (BizSense file photo)

The redevelopment secured the county’s urban mixed-use district zoning designation in August, allowing for several commercial and residential uses to be developed on the site. Eventually, the development would include about 1,000 apartment units and be able to accommodate a mix of commercial uses such as hotels, movie theaters, breweries and more restaurants.

Several outparcels along Quioccasin Road have been redeveloped with newly built retail strips that house Chipotle Mexican Grill, MOD Pizza and Starbucks. An additional outparcel building has been constructed along Parham Road.

Other new tenants taking over space in the mall are Surge Trampoline Park, which will fill the former Macy’s North building, and NOVA Aquatics, which announced in March a public-private partnership with Henrico County to construct an $18 million indoor aquatics center in the former Macy’s South building.

WOW, it is hard to realize that it has been almost 45 years since we opened the Miller & Rhoad’s Department Store there in 1975. Sad to see all the great stores no longer there.

Forever21 is dying and will without a doubt be closing that store. A site plan image would have been nice but it sounds like the property will be separated with the apartment s across a new road and on the closed Sears Auto space so not really mixed into the center? Will a front lobby door face the mall?

The article says it will replace the actual Sears building, “Plans filed with Henrico County call for the Sears building to be razed and replaced by the apartments.” Furthermore it goes on to say it will not involve the Sears Auto space, “According to the plans, the apartment project would not involve the 3-acre former Tire America by Sears site near the corner of Quioccasin Road and Starling Drive.” I suspect because of this that the apartments will essentially be adjacent or just across a two lane road from the remaining portion of the mall. Sounds to me like they… Read more »