A local swim club is preparing to dive into a West End mall. 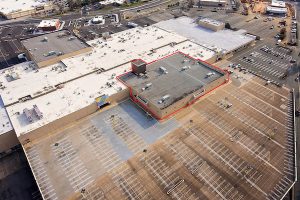 An aerial view of the shell at Regency Square that NOVA will take.

The nearly $18 million project will be funded with $3 million from NOVA; $13 million from Regency’s owners, Thalhimer Realty Partners and Rebkee Co.; and with $1.75 million in grant money from Henrico’s Economic Development Authority, which will vote on the funding in May.

McGee said the 50-meter pool will be named for the family of Sherry Sharp, who donated $500,000 to the project.

NOVA has agreed to a long-term lease for the facility, which previously was reported to be up to 30 years.

NOVA, which offers swimming lessons as well as a competitive youth swim team, has been operating at 12207 Gayton Road since 1987.

Since 2013, it has planned to build a new facility adjacent to its Gayton property. But that’s been derailed after it was discovered that mine remnants sat underneath the land. 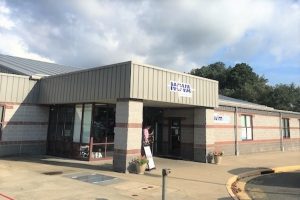 The mall is co-owned by Thalhimer and Rebkee, which purchased it for $13 million in 2015. The former Macy’s space had been tapped as a possible space for Regal Cinemas, but that deal never materialized.

NOVA and Regency Square officials presented their plans for the project to Henrico’s Board of Supervisors and county manager John Vithoulkas at the site Tuesday night. Plans show that Baskervill is the project’s architect and Capstone Contracting Co. is the general contractor.

NOVA aims to have the pools operational in the first quarter of 2021.

A new restaurant, La Cocina Mexican Delicacies, will open at the end of March. Women’s clothing chain Charlotte Russe will close by the end of April as the company goes through bankruptcy.

Talk about an activity generator. It is no small cost ( I think more than they actually bought the mall for), but this will be great to drive traffic to the mall. Think of all the parents that want to get other stuff done while their kid swims for an hour. Or the families that are in between events for a couple of hours at meets.

I wonder about the Jump place?? And if this facility will have entrance through the mall?? Will they let you say bring outside (food court food) into their faculty.

This is good news for area. The big benefit will be regional or national tournaments. The designs looks like it is for more than the local NOVA club meets. Locals will do what we always did and leave after the event.

With Henrico’s investment is this going to have open, public swim times like the East End joint YMCA center??

I think is different from the other Henrico pool. This is coming from an EDA fund whereas the other one is coming from the General Fund. EDA bonds often get paid back over time, or they can write it off as a grant because it helps local businesses. I don’t think the one in the east end will have the same economic impact as this one. Considering the mall is paying $13 mil I sure hope there will be access directly into the mall! That’s kind of the whole point of this. They’re not looking to just fill up space… Read more »

YES! The $1.75 M will be paid to NOVA over the next five years. It will allow open swim times similar to the times in the Eastern Henrico for the next 30 years. And, it will allow low-cost memberships for Henricoans.