It was predicted in 2019 when banking giants SunTrust and BB&T merged to become Truist Bank that the marriage would lead to large-scale branch overlap and consolidation in many states, particularly several markets in Virginia.

Now, more than a year later, that consolidation has begun in earnest across the commonwealth, including in the Richmond region.

The combined bank recently closed a BB&T branch at 1366 Sycamore Square Drive in Midlothian and a SunTrust branch at 12551 Jefferson Davis Highway.

The pair was among 28 branches Truist closed across Virginia on Dec. 8, according to a notice it filed with the State Corporation Commission.

And there’s more to come.

A Truist spokeswoman said Monday the bank plans to close an additional 41 branches in Virginia this year, including eight in the Richmond market in notable areas such Short Pump, Church Hill and Willow Lawn.

The eight local branches, which all will close March 2, are being consolidated into nearby branches, part of Truist’s effort to create what it calls “blended branches.”

“Our blended branch concept, introduced in November 2020, is a natural next step for the many SunTrust and BB&T branches that are very close in proximity, many across the street or even in the same parking lot,” a spokesperson said in an email.

Here are the Richmond-area branches set to close March 2 and the locations they’ll be combined into: 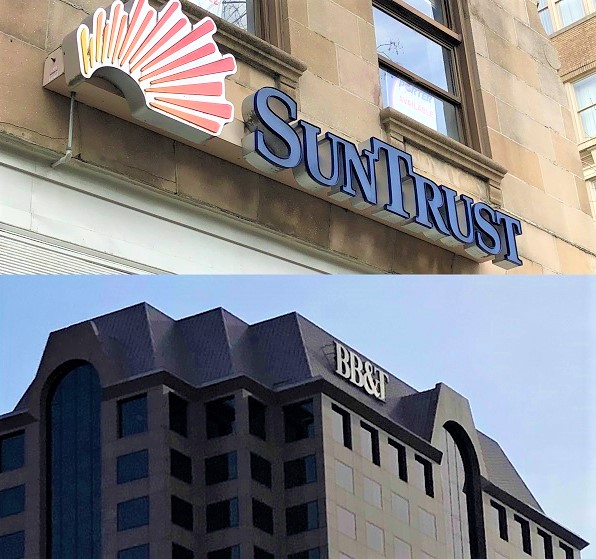 Truist Bank, which still has signage with SunTrust and BB&T logos on its buildings, closed two local branches in December and has eight more slated to close next month. (BizSense file)

The blended strategy includes signage on the branches with both the SunTrust and BB&T logos, ahead of an eventual rollout of the Truist brand across the board in 2022.

The bulk of the 28 Virginia closures in December were in Northern Virginia in places like Arlington and Fairfax. They also included locations in Hampton Roads, Roanoke and Staunton.

The banks said employees from the closed branches are being transferred to nearby locations, resulting in no job losses related to the transition.

BB&T and SunTrust closed their $66 billion mega-merger in December 2019, creating the sixth largest bank in the U.S. with more than $440 billion in total assets and 3,100 branches, mostly in the Southeast.

That included 71 locations around metro Richmond — 35 from SunTrust and 36 from BB&T.

As part of the combined cost cutting that would result from the deal, the bank said it estimated closing 800 branches nationwide. It committed to keeping the majority of overlapping branches open one year from the Dec. 6, 2019 closing.

Aside from its retail operations, Richmond could see additional ripples as BB&T and SunTrust settle into Truist.

The companies have previously said it’s too soon to discuss changes at any of those other affiliates, although SunTrust did confirm in 2019 its plans to relocate parts of its mortgage operations, including the division’s top leadership, to Greensboro, North Carolina, as part of the merger. It said at the time those relocations would take place in the next two years and could affect two or three dozen positions.

The downtown Richmond skyline may also change as a result, particularly as the Truist brand begins to make its formal debut on the bank’s buildings. The company still currently has its two legacy names atop buildings downtown — with SunTrust’s on its namesake SunTrust Center at 919 E. Main St. and BB&T’s across the face of one of the Riverfront Plaza towers on East Byrd Street.

Closing the branch closest (and one of the oldest) to LMI residents including many of color in favor of a downtown branch that serves the business community. Your commitment is shining through. The leaves no actual bank branch serving any part of Church Hill, Union Hill or any of the east end of the City.

I’m sad to see the Church Hill branch go, too. This isn’t consolidating SunTrust and BB&T, this is just straight closing down a neighborhood resource.

Yeah the list is strange. They are closing River Road in favor of 5816 Grove near Libbie but 5707 Patterson will stay open. Those two Truest branches are barely .50 mile apart!

May I suggest our local bank, Capital One? They have phenomenal service, products, and I have been thrilled to bank with them since leaving Suntrust (Truist).

I have them and love them but I once saw a call center employee of theirs walk into Carytown Cafe to cash their company paycheck; you can’t.