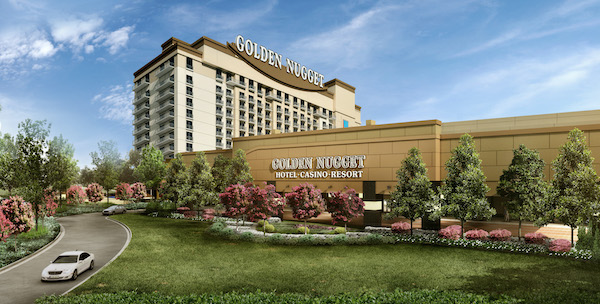 A rendering of the proposed Golden Nugget casino. The Texas-based firm has not disclosed the precise location where it would build a casino in Richmond. (Courtesy of Golden Nugget)

Editor’s Note: This story has been updated to note that the city formally announced the six contenders for the casino RFP. It’s the same six that had already been reported, but the city did provide some additional detail.

The field of casino contenders in Richmond is formally set at six.

The city on Friday confirmed that the previously reported six applicants are all that responded to the RFP for a resort casino development within city limits.

Here’s the list of the six respondents and their proposals:

Bally’s Corp.: A $650 million project to rise on 61 wooded acres at the northeast intersection of Powhite and Chippenham parkways.

Golden Nugget Hotels & Casinos:  A $400 million casino development on 61 wooded acres at the intersection of Powhite and Chippenham parkways, the same site Bally’s Corp. is pitching.

Pamunkey Indian Tribe: A $350 million casino resort on the city’s Southside at 5000 and 5030 Commerce Road.

Urban One and Peninsula Pacific Entertainment: A $517 million resort casino at 2001 Walmsley Blvd. on land currently owned by Philip Morris.

Wind Creek Hospitality: A $541 million casino development at 1220 and 1260 Ingram Ave., a roughly 47-acre industrial site toward the southern end of Manchester.

Golden Nugget and Wind Creek were the final two to publicly confirm last week that they had responded to the RFP, with the other four coming earlier in the week.

Golden Nugget is a Texas-based firm owned by Houston Rockets owner Tilman Fertitta, while Wind Creek is the entertainment arm of the Poarch Band of Creek Indians tribe.

In an announcement Friday, Mayor Levar Stoney touted the number of respondents as a sign that Richmond remains an attractive place for investment. The city issued the RFP in late December after a public survey asking citizens what factors should be considered when fielding proposals for a resort casino. The RFP deadline was Feb. 22.

Also of note in the city’s announcement was the confirmation that Golden Nugget and Bally’s are vying for the same Southside site at the intersection of Powhite and Chippenham parkways. It’s unclear exactly how that competition might play out.

Golden Nugget, which currently has five casinos spread across Nevada, New Jersey, Mississippi and Louisiana, is proposing a 950,000-square-foot “Golden Nugget Richmond Hotel & Casino” that would include a 93,000-square-foot casino floor, a 177-room hotel, a concert venue, a pool area with cabanas, along with retail and restaurant space.

Bally’s, a publicly traded firm out of Rhode Island that operates 11 casinos nationwide, would build a casino with over 90 table games and 30 poker tables, a 250-room hotel as well as an event venue, spa, dining options and rooftop bar, all spanning 1.6 million square feet.

The next step in the city’s process is a virtual community meeting on the matter on March 9. At the meeting, Convergence Strategy Group, a Louisiana-based consultant hired by the city’s Economic Development Authority, will present its analysis of the prospective casino market in Richmond.

The city and consultant would then select the best bid and begin negotiations with that respondent, a expected to be finalized in June. City residents would then go to the polls to decide whether to grant a casino license to the selected operator during a referendum on Nov. 2, 2021. 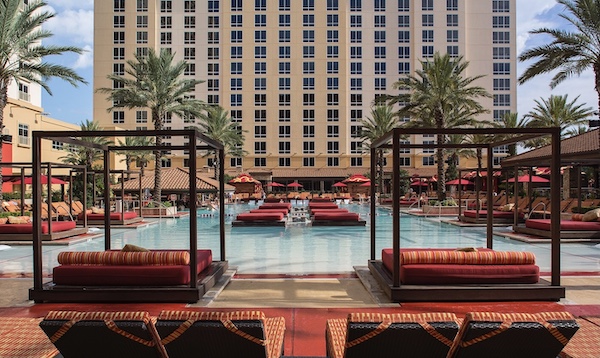 The Golden Nugget resort would include a pool area with private cabanas and a lazy river.

All the respondents are touting minority outreach and ownership in their proposals.

Golden Nugget, for example, said a local Black and Hispanic-owned company has a 5 percent stake in the firm and that it is seeking additional minority partners to take an additional 5 percent stake. Cordish said that it has “substantial minority investment” in its company, Urban One is a Black-owned business and said it has over 50 local diverse investors in its project, and the Pamunkey Tribe said it believes it’s the only applicant that has 100 percent minority ownership and is entirely based in Virginia.

Wind Creek’s proposal includes the largest number of hotel rooms with two planned 252-room towers. Its plan also includes a 100,000-square-foot casino area, a venue and room for seven restaurants. Wind Creek said in its announcement that its project would be built in two phases.

Wind Creek currently operates three casinos in Alabama, where the Poarch Band of Creek Indians’ ancestral land traces back to 800 A.D. The tribe’s land also included much of present-day Georgia.

Four former tobacco warehouses currently stand on the land on Ingram Avenue that Wind Creek is eyeing for its casino. The land is owned by an entity tied to local development firm Harper Associates, per city property records.

On the Nugget proposal in order for the math to work out anywhere close (6 miles from downtown and 20 miles from airport) it probably would have to be far west end or southwest. I don’t see the available land or the neighbors approving anything north of the river in the west end. Trying to hit those numbers you come up pretty close to where Rosie’s is now. Stony point is a little outside those numbers and I am sure the community wouldn’t be in favor but that immediately jumps to mind as a place with lots of parking that… Read more »

Actually there’s no reason the mileage calculation cannot be to the south such as near the interchange of Midlothian Tpke and the Chippenham. Perel has committed his Powhite property to the “lottery” so why not his property south of Stonebridge? it’ll require another outlet on Rte 150 but so will the one on the Powhite. I’m disappointed to learn that there will be only one casino–by state law–thereby opening the floodgates of PAC donations and lobbying to control that monopoly. There will be no market competition and quality control for the winner. The consumer will be the loser ultimately. This… Read more »

Bruce – I certainly have no insight and really even no preference. I am not familiar with the Stonebridge property you reference. My assumption of “why not south” is that the comments about distance didn’t make sense to me if it was . RIC and Downtown would almost be the same distance to points directly south or southeast. It order to get as much variation as as was quoted (6 miles and 20 miles) you would have to go in the opposite direct of RIC in relation to downtown. Of course the developer might have just been throwing out very… Read more »

Stonebridge is the brand name for the Cloverleaf Mall site that was redeveloped 10 years ago.

That’s in the county, so it wouldn’tmqualify. Correct?

The eventual property, wherever that funky math leads to, has to be within the limits of the City of Richmond, based on the casino law. So it has to be somewhere in the farther reaches south of the James, right?

Maybe check your math. Commerce Rd. is very close to downtown and the airport. Those locations are literally adjacent to I-95. I’m not sure how you figure the far west end or southwest would be closer? You site Rosie’s as an example of a more viable location?

Maybe I didn’t word my response correctly. I was only saying those areas I mentioned fit the “20 miles to the airport and 6 miles from downtown” statement the developer stated in his interview. It you take for example the Commerce Road locations the others have already picked those are more like 10 Miles from the airport and 6 miles to downtown. I wasn’t saying it should be built one place over another just trying to “guess” the location based on the developers statements.

This rendering is uninspiring. It reminds me of a Quality Inn. Although, to be fair, some of them look better than this. If we only get one shot at this, I hope it is something that makes a more significant contribution to the neighborhood fabric.

Amen. Whatever comes will be there for a long time.

Richmond should build all 6 proposals and become the next Atlantic City. Classy.

Golden Nugget is a good brand. Richmond needs a midsized casino nothing vegas style – though Golden Nugget is in Old Vegas. Much more a poker casino. I don’t think this is a bad idea – and limiting Richmond to one casino helps with too many development sites that could go belly up and lead to eye sores. Leave it up to the development broker to be uninhibited -though I agree with Bruce that it will lead to dysfunction in the government process. Imperfect world. This will take 5 years anyway with tons of money dripping in and out of… Read more »

Why has no one connected the casino with the coliseum proposal? Seems to me these two things could work hand in hand. Why have a coliseum depend on the taxes from an office market being hit extremely hard by the pandemic when you can get it from a casino?

I actually had thought of that right away because that almost fits the developers 6 miles from downtown and 20 from the airport comment. But then I remembered this was a Richmond City RFP and that property is in Henrico. But yes it makes sense to me. I think a location at 295 and 95 would be ideal and you are more likely to attract visitors from populations centers in northern VA than something on the southside of Richmond. I know the state determined “Richmond” as one of the five approved locations, I assumed it must be in the City… Read more »

Correct, it is specific to the City of Richmond. Since MGM is immediately across the Potomac from the bulk of NOVA, we may be better situated to draw from Central Virginia, Shenandoah and North-Central North Carolina (with competition from Danville).

You are probably correct, however I still think we could pull some of NOVA players down here if we had a top notch property with reasonable cost. I have been to the MGM many times and I know a lot of people that are casual gamblers. Most don’t like the MGM due to very few low dollar games and very high dollar room rates. With the big money in the DC area they don’t have a problem filling up $50 table games and $500 a night rooms. That’s pretty rich for some people.

Based on my experiences at the Las Vegas location, that certainly makes sense to me. Personally I have avoided checking out MGM National Harbor after their failed attempt to block the Pamunkey from gaining federal recognition.

I’m not a prude…I like to gamble. But, I know my limits. The only think I dislike about the whole local casino idea is for what it gives in jobs and opportunity, it will also bring a world of hurt to those who can least afford it. Yes…it’s personal choice to take a small paycheck and blow it at a casino (heck, most are with weekly lotto tickets) but I’m concerned about offering another paycheck disposal system for those who can’t really afford it. That Stoney and cronies tout this seems rather laughable in that in the end, it is… Read more »

I have visited my fair share and like you I feel I normally have no problem staying within my limits. However as you mentioned I have seen a noticeable drop in what I perceive is the income averages of most gamblers compared to 30 years ago when I first went to Casino’s. I will be the the first to admit “you can’t judge a book by it’s cover” all the time but I think my generalizations are accurate. I feel like “gambling” used to be something that was perceived as something the affluent people did, now it’s considered “main stream”… Read more »