An elevation of the three-story apartment buildings slated for an office park site. (Courtesy of Chesterfield County)

Three decades after it was zoned for office development, a 10-acre site near the interchange of Powhite Parkway and Midlothian Turnpike is now slated for hundreds of apartments.

Virginia Beach-based Boyd Homes is building the apartments for Brandywine Realty Trust, a Philadelphia-based REIT that purchased the site in 1999 through its real estate and investment arm, Brandywine Operating Partnership. The site was part of a three-parcel purchase that included the nearby 5-acre Gateway Centre III site, which Brandywine sold in 2017 for $1.1 million.

Brandywine had paid $1.25 million for the three parcels, according to Chesterfield property records. The latest county assessment valued the 10-acre parcel that’s slated for the apartments at $631,700.

The 10-acre parcel had been zoned since 1987 as part of the 80-acre office park, which is about halfway built out. Boyd Homes President David Rudiger said his firm was brought in to consider apartments for the site, which he said had proven difficult to develop due to topography challenges.

“They were thinking about whether it would work for multifamily,” said Rudiger, who was connected with Brandywine by David Smith with Cushman & Wakefield | Thalhimer. “I got together with him and our engineering people and came up with a concept that would work with the topography instead of fighting it.” 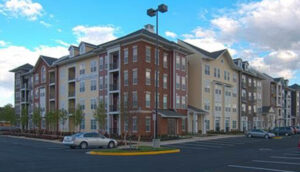 Rudiger said the apartments will be market-rate and comparable in design to those at Element at Stonebridge, the 400-unit complex that Boyd Homes built at the redeveloped former Cloverleaf Mall site. While the floorplans would be similar, he said rental rates would be lower due to differences in amenities and design. He said specific rates have yet to be set.

“We built a sister project to (Element) here in Virginia Beach, and the people really love the floorplans of that property. It’s been very successful,” Rudiger said.

With the Gateway project, he said, “We’ve taken those floorplans and incorporated them into a walk-up instead of an elevator design. The floorplans are almost identical to Element, but they should be at a lower price point because it doesn’t have all of the amenities that Element has.”

Plans show that the seven buildings would rise three stories and encircle a central clubhouse and pool. Units would range from one-bedroom studios totaling 650 square feet to two-bedroom floorplans of up to 1,280 square feet. 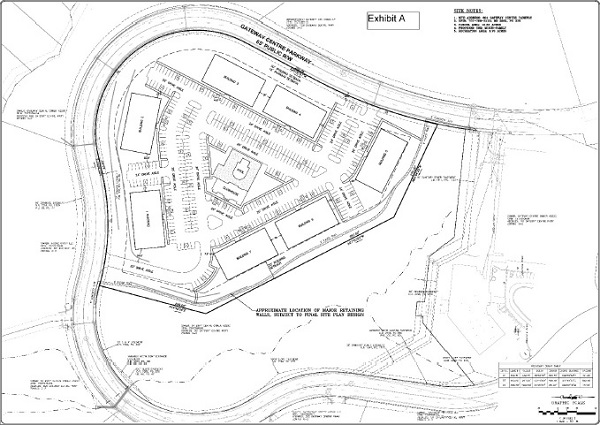 A site plan shows the seven-building layout of the apartment complex. The image is oriented with the left side as north.

Rudiger said a cost estimate for the project would not be known until designs are finalized.

Rudiger said he’s aiming to start construction in summer or fall next year. He said construction could last six to nine months.

In addition to Element at Stonebridge, Boyd Homes’ other work in the region includes the 457-unit Rivermont Crossing, which it developed in the late 2000s and sold in 2018. It’s actively building Towns at Swift Creek, a townhome development near Brandermill. It also has built houses in its Castleton community near Dorey Park in Henrico County.

The Gateway project is the latest example of residential development seeping into decades-old suburban office parks. Also in Chesterfield, the nearby Boulders Office Park is seeing an influx of hundreds of new apartments from local developer Dominion Realty Partners.

And in other loop road news involving new apartments, Chesterfield supervisors also recently approved the 310-unit Coalfield Reserve, which is planned to complete the unfinished Walmart Way loop road behind the Midlothian Walmart and Sam’s Club.

Chesterfield has embraced the mixed use concept for burbs, as well as the fact that these Class A apartment rents do not produce many school age children. They are real estate tax cows that provide transitional housing for all ages. Another great example that has burst out of over the ground recently is CMBs Commonwealth Center apartments built on a site on Rte 288 that lay dormant for 15 years as office zoned land. These luxury units are all elevator and internal hallway accessed.

While the rest of what you say may be true, this is far from a mixed use concept. This is an apartment complex in an office park. Nothing revolutionary about it other than more apartments actually getting approved in Chesterfield. In fact, if you read the story, these will have less amenities than their other similar products. It is traditional suburban apartments with a new skin. May definitely be needed in this area, but far from something new.