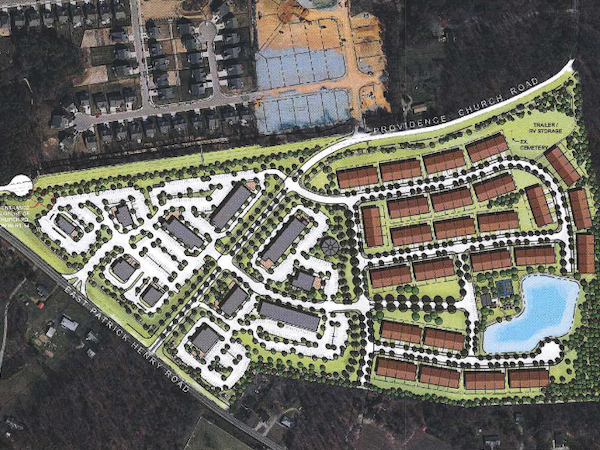 The Hanover Board of Supervisors voted down the proposed Hickory Grove development earlier this month. (Courtesy of Hanover County)

The future of a proposed multi-use development outside Ashland is up in the air after it was voted down by the Hanover Board of Supervisors earlier this month.

The team behind the nixed proposal to build Hickory Grove, which would have featured 100 age-restricted townhomes as well as 90,000 square feet of commercial space on 51 acres at the intersection of East Patrick Henry and Providence Church roads, is still weighing its options after the supervisors rejected the proposal.

“We thought the plan we put forth was within the county guidelines for their comprehensive plan and that we went through the appropriate steps to do that,” said Todd Rogers, a principal with project developer Rogers-Chenault Inc. “We’re at a little bit of a loss of what we will do next with the property.”

Rogers said the developers and county officials met Monday to discuss a future use for the property but declined to comment on what was discussed. Rogers said there is still interest in redeveloping the property.

The Board of Supervisors voted to deny Rogers-Chenault’s rezoning request after the application spent a year in the county approval process and underwent revisions in a bid to make it more appealing to county officials amid opposition from local residents. The land owned is by Hickory Hill II LLC, an entity tied to developer J.B. Campbell Ltd.

Traffic concerns and a desire for the development to be entirely residential were among concerns expressed during community meetings held in late January and early February. Most speakers at the public hearing that preceded the board’s vote voiced opposition to the project, citing concerns such as traffic impacts and a desire to maintain the area’s rural character.

“When something like this happens and the politics get involved, it makes decisions harder for everyone,” Rogers said Monday. “I think part of what happened here is not misinformation but just not being informed (about the comprehensive plan).”

The bid to create the mixed-use development came amid the years-long development of the 277-home Hickory Hill subdivision, a nearby Rogers-Chenault project that’s named for a local historic home.

So if the Master Plan was done why was the zoning not changed? It tells me, like Richmond 300, the Plan favors developers over residents so the residents are speaking up against what they don’t like.

The reason why the 331 home project in Powhatan County failed last was everyone and the Powhatan Board of Supervisors asked were is the money going to come from to pay for the 12 million dollars in road improvements needed for Page Road.

I really think that would be my quesiton with this new developmet were is the money going to come from road improvements.

This would have probably passed if the developers would have dropped the commercial space. Hanover has long been opposed to commercial development on Route 54 from I95 to the Courthouse. Even with that they probably would have pushed for the developers to put in for road improvements/widening considering there are several communities already there on Woodside Lane.

Hanover lets warehouses go up everywhere but they shut down good development.