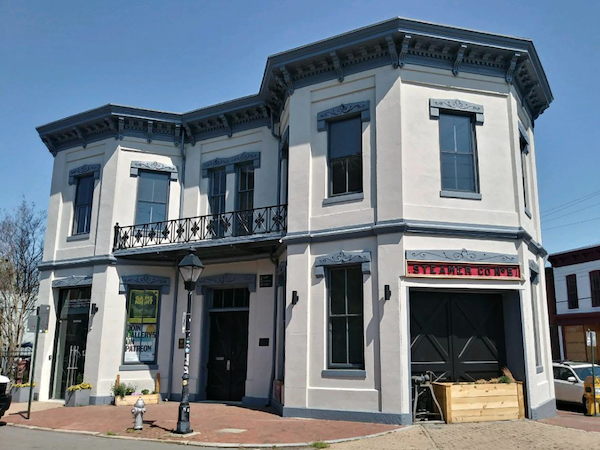 The Loft at Steamer Co. 5 recently opened at 200 W. Marshall St. The events venue has leased out the second floor of the historic fire station. (Jack Jacobs photo)

Undeterred by the pandemic’s effects on the events industry, a North Carolina venue owner is full steam ahead on an expansion into Richmond.

Nicole Clayton recently opened the doors at The Loft at Steamer Co. 5, an events venue inside the historic firehouse at 200 W. Marshall St. The 3,000-square-foot space, which opened in mid-February, is the upstairs neighbor of Gallery5, an art gallery that’s been in the building since 2005.

Like others in the events business, Clayton has taken some hits from the pandemic. She was forced to shutter one of her North Carolina venues. But she continues to run The Cloth Mill at Eno River in Hillsborough, North Carolina, and now is back up to two venues with the opening of her space in Jackson Ward. 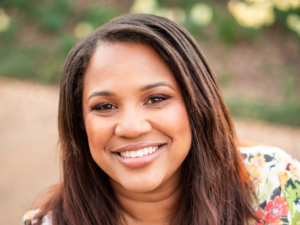 Nicole Clayton is the owner of The Loft at Steamer Co. 5. (Courtesy of Loft)

Existing restrictions on in-person social gatherings remain a hurdle but Clayton said the size of The Loft gives her an advantage. State rules intended to stem the spread of COVID-19 were recently updated to permit social gatherings (i.e., parties and celebrations) of up to 50 people indoors and 100 people outdoors.

“I’m not worried because I’ve seen the other side,” Clayton said. “I’m just happy I’m here and because my space is smaller I’m doing 60 people at max (anyway).”

Clayton takes over a newly renovated space in the Steamer Co. 5, which was purchased in 2018 by local developer and landlord Bruce Vanderbilt, who fully upgraded the second floor.

Clayton and Vanderbilt have known each other for a few years, and Clayton landed in the space after they started conversations in December about Vanderbilt’s interest in lining up an events operator. Clayton had also explored opening an events venue in Richmond several years ago but had put those plans on the back burner.

“Once I saw it I just fell in love,” she said. “It’s my style. I love historic properties and celebrating the history behind the buildings and who worked in it.”

The building was built in the 1880s and served as a fire station. The building has also been home to a police and fire museum. Clayton’s 10,000-square-foot North Carolina venue is a historic textile mill. 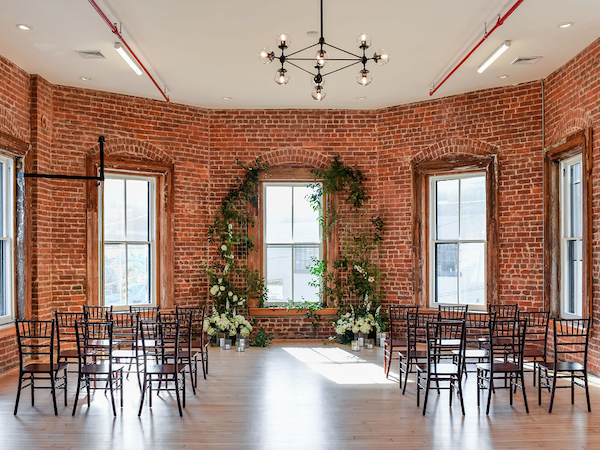 The events venue can accommodate up to 60 people seated at tables and 75 people at a standing cocktail reception. (Courtesy of Loft)

The new venue can handle a maximum of 60 people seated at tables or up to 75 people at a standing reception. Clayton sees her venue as a place for a variety of gatherings, ranging from weddings and birthday parties to conferences and business retreats. She said she has some events already booked.

For now, Clayton and her North Carolina crew run the operation, but the end goal is to have a full local staff of one to three people to run the Richmond venue.

For others in the local event industry, the pandemic forced some difficult choices and some creative pivots. Longtime event supply company Exhibits Inc. shut down and put itself into bankruptcy last year, while event staffing company RMC Events has kept busy by helping run COVID testing and vaccination sites.

Has the city already granted approval for this event space? I’m very familiar with this building and agree that it is a beautiful space. Where on earth would 60 wedding guests park? The area is already densely populated and has a few restaurants within a 1 block radius. There is also a newly implemented residential parking sticker program that limits visitor parking to 1 hour around the venue. That program was necessary due to the loss of parking on Broad Street after the Pulse took out so many parking spaces. Maybe everyone can park at Willow Lawn and take the… Read more »

Willow Lawn’s parking is precious even now while the pandemic limits the numbers within the restaurants. It’s not a commuter lot. There’s always uber, though, providing a safe means to “get their and back” for those imbibing in alcohol’s pleasures. If ours is going to be a great city, we cannot restrict activities based upon parking ratios. That’s how suburbs end up with seas of asphalt. Let’s build on our parking lots, and people will work out how to participate.

We had a client appreciation event there right before the pandemic hit. We used a local company to valet park which worked out really well and I felt it was reasonably priced. Funny thing is that most of our guests arrived via an Uber / Lyft for simplicity and we ended up paying for extra spaces we never used. Attending an event is different than a spur of the moment outing where you just jump in your car and head to the location. Most hosts and guests will plan in advance for their arrival.

Good comment – for everyone complaining about parking, please remember that not everyone (probably most people), can’t walk or bike really long distances. Not everyone is 25 years old with perfect joints! Also, guests going to a wedding in the summer aren’t going to want to hoof it for miles, it’s never going to work. Uber/Lift is an option is those cases of course. Please try to have some compassion for those we aren’t as mobile as you. One thing I’ve really loved about Richmond is that it’s so easy to drive and park places, and not have to worry… Read more »

uber is easier than parking… it puts you right at the door. No need to figure out any logistics.

Cities should not be built around parking. If people think parking is important to their business, they will provide it.

That should be the owner’s decision, not the city’s.

Obviously Uber is easier than parking, but an Uber ride from Short Pump may cost $40 – $50 each way depending on surge pricing. This building has no parking on the property at all. Try to image you live on the block and you need to park on the street when you return from work, the grocery store, have a friend over for dinner, etc. That will be tough when 20 – 50 additional cars land in the area every time there is an event.

This can’t be the first time this type of situation has come up. Many events hire shuttles to get people back and forth from a nearby lot that don’t impsct local businesses. I’ve shuttled to Hardywood several times. This is just not a problem for creative planners.

The Richmond parking peanut gallery strikes again ruining another comments section. Bizsense – you should moderate all this parking comments as offensive!

Parking is an issue everywhere in every city. Try to be forward thinking and write about how it’s good coming out of the other side of the pandemic and a venue is opening it’s doors in a great building. Making comments about parking is so debased in thinking. Richmond is a great city fighting progress makes you look pedestrian, excuse the pun.

John, I am stoked for Clayton and my neighborhood.

I would be foolish to not speak out where I see weaknesses that could be strengths, therefore pointing out what I see as a major flaw, especially as it pertains to my daily life.

People that bring problems without solutions to the table aren’t helping. It’s an issue in any growing city. You’re not going to win over unless a company decides to build a parking garage, which I’m sure you’d complain about. It happens a lot on this forum over every project and clog any good messaging.

You sound pretty high and mighty. Sorry you sound like you have a lot of opinions yourself. Maybe move somewhere else if you’re unhappy, or don’t butt your head into someone else’s conversation. How nosy, not good!

A hysterical response rather than dealing with the facts. This article is about an event space being opened on a block that has already lost lots of parking and has a parking sticker program that has been added fro residents. If you don’t care about parking, I assume you either live in the burbs and disregard quality of life issues for those who do live in the city.

I live on Cary St near Hometeam and VCU. I’ve lived in Richmond for 8 years always city proper near west end, northside, museum district, and the fan. Lived in DC for years and traveled to cities abroad. Richmond has top notch infrastructure and great bones. The city is not being out paced by growth but has recently begun coming to terms with a very southern traditional mid market town ruled by a few families to ok with it’s identity of tattoos and urban growth with diversity. We are a boutique economy. All 6 of our fortune 500 companies are… Read more »

Vey basic of you – and you used your own initials and made fun of mental health. Way to be.

Way to call yourself out and make fun of mental health. You’re winning.

Perhaps I’m in the minority here. I live in Chesterfield now, and have to drive to do anything. For decades, though, I lived in the City. I appreciated then, and miss now, the ability to walk daily to take care of basic needs. I walked to work, to the bank, to DMV, the hardware store, the grocery, to events… It’s part of living in a metropolitan area. Then and now, I relied on Uber and carpooling for events that might require a car. It’s not that darned hard.

Beautiful space in a prime location. There is parking nearby in the Jackson Ward and Museum Districts. Looking forward to seeing event photos.

A blanket statement with no merit. There is parking. The parking is usually taken thus unavailable.

The City failed us by not giving a single commuter parking spot. I also have faith this venue will be a fabulous success.

Curious if the BizSense editors have ever considered pre-populating a bunch of parking concern comments on their articles in order to save everyone some time. It might help improve productivity in the metro area.